Learn about locally invasive plants, where they came from, what we are doing (or not doing) and what Henry would think.

Henry David Thoreau was a fine observer and recorder of wildlife and plants in the mid-1800’s. As a botanist, he was both a collector and an early phenologist, noting the times of flowering, leafing, and fruiting over decades. Now, 175 years later, Henry would be fascinated (and shocked) to see what grows in our woods, fields, marshes, rivers and back yards. Sauntering around Concord at growing season he would find a quarter of the species he studied missing. He would note native flowers coming out earlier and breeding summertime birds arriving earlier. What might draw his attention most is the abundance of trees, shrubs, vines, wild flowers, grasses and aquatic plants that he would not recognize.

This presentation of charming newcomers (and the birds and people that spread them) will prepare you for next summer’s gardening fun. 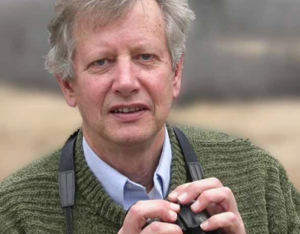 Peter Alden is a Concord author and naturalist. He has spent 55 years leading birders and travelers to over 100 countries on the seven continents and the seven seas. He is the author of more than 15 books on North American and African wildlife, including the National Audubon Society’s Regional Field Guide Series and has sold over 3 million copies. On July 4, 1998—a date commemorating the 153rd anniversary of the day Thoreau moved into the cabin he had built at Walden Pond—Peter and the late Dr. E.O. Wilson organized the world’s first bioblitzes centered at Walden and supported by the Walden Woods Project, Minuteman National Park and National Geographic Society. Hundreds of invited specialist field biologists have verified 3,600 species of vertebrates, invertebrates, plants, mosses, lichen and fungi in 3 days! He serves on the Thoreau Farm Trust board of directors and is part-time at the Thoreau Society Shop at Walden Pond.