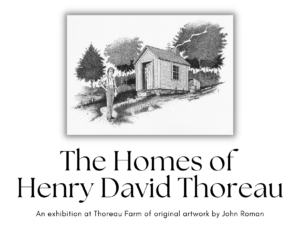 Visit Thoreau Farm this March & April to get a close look at places Henry lived and what he learned from each home. This exhibit features fifteenhistorically accurate pen-and-ink renderings documenting Henry David Thoreau’s 19th-century homes and locale. Several images from this group were featured in the Summer 2022 issue of Discover Concord but the exhibit at Thoreau Farm will be the first time these works are exhibited in Concord.

Several drawings in this body of work also appeared in Electrum Magazine (June 2021) in the essay, “The Homes of Henry David Thoreau.” These works previously appeared in a group show at the Duxbury Art Complex Museum from September 2019 through February 2020. One drawing from this project, “Walden Pond circa 1846,” appeared in the feature documentary film, Henry David Thoreau: Surveyor of the Soul (2017) by director Huey.

Along with detailed drawings of individual homes, the exhibit will also include the original bird’s-eye view of “Thoreau’s Concord circa 1845” created through a Thoreau Society Fellowship (2003-2006). Prints of the bird’s-eye-view are sold by The Thoreau Society at The Shop at Walden Pond and online. 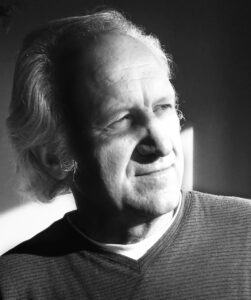 John Roman is a regular contributor to Artists Magazine and has written for several other national art publications. Roman’s essays on Thoreau have appeared in Electrum Magazine (2021), The Bungalore Review (2019) and The Concord Saunterer (2007). A graduate of Suffolk University’s New England School of Art & Design, John has been teaching at the Massachusetts College of Art and Design in Boston since 1993.