The Write Connection at Thoreau Farm is a program in partnership with the Thoreau Society. Through writing workshops and author talks we support writers who expand on Thoreau’s extraordinary insights into life, nature, and social responsibility or find in Thoreau inspiration for living deliberately, practicing simplicity, and exploring new ideas for positive change. Help us continue to offer these programs by donating today!

Miss the talk? Watch it here!

When Things Go Horribly Wrong: A Conversation with Sy Montgomery

To research books, films and articles, Sy Montgomery has been chased by an angry silverback gorilla in Zaire and bitten by a vampire bat in Costa Rica, worked in a pit crawling with 18,000 snakes in Manitoba and handled a wild tarantula in French Guiana. In this talk Sy discusses her writing process and her long and adventurous career with Michael Frederick, Executive Director of Thoreau Society. Program recorded Sunday, April 24, 2022. 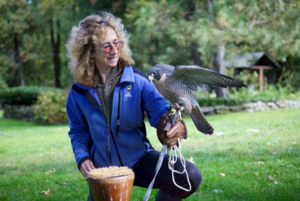 André Gregory (“My Dinner with André”) in conversation with Michael Frederick

This is Not My Memoir is the life story of the iconic director, writer, actor, and co-creator of My Dinner With André. Taking the form of a wondrous fever dream, this autobiography-of-sorts presents fantastic and fantastical recollections from the director who changed theater forever with his Manhattan Project, who once drove a fire truck onto the stage in the middle of an opening night, and who has been willingly buried alive. In this talk he discusses his life and work with Mike Frederick, Executive Director of the Thoreau Society.

Braiding the wild, the spiritual, and the human into poems and meditations, Chrissa Ventrelle focuses on the soothing wisdom of nature and the gift of togetherness in her second collection, What Nature Knows: Poems & Meditations. She is joined by artist Hillary Waters Fayle who provided the artwork for the volume. The two share a conversation about how nature inspires their work, their creative processes, and discuss Thoreau’s influence on their words and illustrations. Program recorded Saturday, March 19, 2022.

The Transcendentalists and Their World explores the social transformation of Concord through the lens of the Thoreau household and extended family, along with other figures with whom Henry Thoreau was familiar. Author Bob Gross was joined by Jayne Gordon on location at Thoreau Farm, the Birthplace of Henry David Thoreau, to discuss his new book. Program recorded Sunday, December 5, 2021.

Brad Stulberg is an internationally known researcher, writer, and coach on human performance, well-being, and sustainable success, and bestselling author of The Practice of Groundedness, Peak Performance and The Passion Paradox. In this talk Brad shares how he translates concepts to the page in order that we may cultivate a “resolute sense of self” to enable “deep and enduring” success in life. Program recorded Thursday, December 2, 2021.

Featuring four of the contributors to “Short, Sweet & Sacred,” a collection of 52 essays from life coaches who overcame and moved from stuck-to-success. Our panel included the editor of “Short, Sweet & Sacred,” Erin Davenport, a certified life mastery coach and author; Aurelie Cormier, a clinical oncology nurse and a clinical nurse specialist for Women’s Health; Golivia Patil, (bottom right) co-founder of the platform, Kernel to Popcorn; and Theresa Garvin, (bottom left) clinical social worker, therapist, and owner and CEO of The Life You Imagine. Program recorded October 2, 2021.

Playwright Tammy Rose performs her latest play, “The Women of Concord in the Time of Thoreau.”

Tammy is the founder and administrator of the Facebook Group, Transcendentalists 2021, host of the You Tube Series, “Concord Days,” and host of the podcast, “Walden the book & Concord the Town.” This play was performed during Thoreau Farm’s virtual birthday party and picnic for Henry’s 204th birthday! Sponsored by The Write Connection at Thoreau Farm, in partnership with The Thoreau Society.

Join us for a conversation with John Hanson Mitchell, author of “Ceremonial Time: Fifteen Thousand Years on One Square Mile,” “Walking Towards Walden: A Pilgrimage in Search of Place,” and “A Field Guide to Your Own Backyard: A Seasonal Guide to the Flora and Fauna of the Eastern U.S.,” among others. He is also the founding editor of Massachusetts Audubon’s award-winning journal Sanctuary. Mitchell discusses his latest book, Legends of the Common Stream, with Thoreau Farm’s executive director, Margaret Carroll-Bergman. Mitchell was the keynote speaker for The Write Connection’s first year of programming in 2019.

A Conversation with Holly Jackson and Megan Marshall

Megan Marshall  interviews her friend and colleague Holly Jackson about her new book, “American Radicals: How 19th Century Protest Shaped the Nation.” We’ll learn more about how the 19th century social justice movement is still influencing our national dialogue on systemic racism, women’s rights, and poverty. Thoreau, Alcott, Emerson, Fuller, Hawthorne, and many other social reformers found in Jackson’s new book, will be touched upon during the talk.

Holly Jackson is an associate professor of English at the University of Massachusetts Boston and associate editor of The New England Quarterly. She writes and speaks on 19th-century American cultural history. Her writing has appeared in The New York Times, The Washington Post, and The Boston Globe, as well as a number of scholarly publications. She lives in Cambridge, Massachusetts.

Megan Marshall is the president of the Society of American Historians and author of “Margaret Fuller: A New American Life,” winner of the 2014 Pulitzer Prize in Biography and Memoir, and “The Peabody Sisters,” winner of the Francis Parkman Prize, the Mark Lynton History Prize, and a Pulitzer Prize finalist.  Both books were winners of the Massachusetts Book Award in Nonfiction.  She is the first Charles Wesley Emerson College Professor at Emerson College, where she teaches nonfiction writing and archival research in the MFA creative writing program.  She lives in Belmont, Massachusetts.

A panel discussion featuring Richard Smith, Nikki Turpin, Beth van Duzer, Tammy Rose, and Margaret Carroll-Bergman. Henry David Thoreau and his fellow Transcendentalists sparked a literary revolution, 60 years after the American Revolution in the tiny town of Concord. Armed with the ideas of social reform, the Transcendentalists of Concord, the Concord Female Anti-Slavery Society, Thoreau women, and early Civil Rights Activist Ellen Garrison addressed the reform issues of the day — slavery, the aftermath of slavery, and women’s rights. The panelists discuss how these 19th century thinkers and activists continue to guide us in addressing these issues today.

Stark Mad Abolitionists: Concord and The Fugitive Slave Law of 1850

Join Concord historian Richard Smith as he tells the story of Concord and the Fugitive Slave Law. The well known Concordians are part of the story, but some of their lesser known friends and neighbors, male and female, black and white, also took part in the resistance!  Great for high school, college classes.

A conversation with filmmaker Ivy Meeropol about her latest film, “Bully. Coward. Victim.: The Story of Roy Cohn.”

Ivy is the granddaughter of Julius and Ethel Rosenberg and was joined by her father Michael Meeropol in this interview with Margaret Carroll-Bergman, executive director of Thoreau Farm. Students interested in social justice and how antisemitism and fear of communism created a climate to send a civilian couple to the electric chair.

Ivy Meeropol is a writer and filmmaker. Her latest film, “Bully. Coward. Victim. The Story of Roy Cohn,” examines Cohn’s relationship with Donald Trump and his influence on the execution of her grandparents Julius and Ethel Rosenberg.

A Conversation with Eric Weiner

A Conversation with Lawrence Millman

Arctic Explorer and writer Lawrence Millman, author of “Goodbye, Ice,” talks about poetry, climate change and the Arctic. Co-Sponsored by the Concord Festival of Authors.

Part of Climate Reality’s 24 Hours of Reality: Countdown to the Future at Thoreau Farm.