An Afternoon with Henry David Thoreau 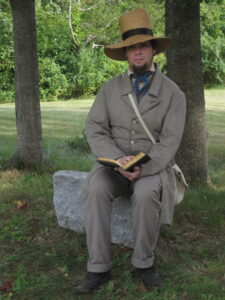 May 15
11am
At Thoreau Farm
Step back in time to 1858 and spend sometime with the famed 19th-Century writer and naturalist Henry David Thoreau! Mr. Thoreau (portrayed by Historian Richard Smith) will read selections from his essay, “Walking.” Afterward he will take questions (in character) for an entertaining and educational look into Thoreau’s life in 19th Century Concord, Massachusetts.

Richard Smith is a Public Historian in Concord, Massachusetts and has been portraying Henry Thoreau for over 20 years. While he spends most of his time (as Thoreau) at Walden Pond, he also travels a great deal, and has performed as Thoreau across the country and in Canada. In addition, Richard has written six books (including two about Thoreau) for Applewood Books. He is also the current Scholar In Residence for Longfellow’s Wayside Inn in Sudbury, Massachusetts.

This program is part of the Freedom’s Way Heritage Area’s month-long Hidden Treasures Festival of Nature, Culture & History.
This program is free and open to the public.