To read well, that is, to read true books in a true spirit, is a noble exercise, and one that will tax the reader more than any exercise which the customs of the day esteem. Thoreau, Walden

During one of my middling lives, I edited a semiannual journal, and, in the midst of my ten-year stint with the blue pencil, I received a great gift. It arrived as part of a note in reply to one of mine: “Yes,” the note began, “I would be happy to contribute a poem to your journal.” That poem became the first of many, and later they were joined by some short essays, encounters with weather and light. How often does an editor get to publish his favorite writer?

As celebration of the coming of Upstream, Mary Oliver’s newest book of essays and “other writings,” I have in mind a little story. And so I went looking in the bins of the past, where I keep some notebooks and correspondence. Much of what I remember from those days seems random or episodic, but I do have these few bins, and I recalled their containing both a student journal and, perhaps, a letter. So I went looking.

There, easily found, was the journal, a series of reflections from a Thoreau-anchored course called Reading the Land that I taught one fall during the 90s. SA, a meticulous student, had typed her entries, and I began to scan them for the one I wanted. Late in the semester, we had been reading Oliver’s West Wind, and one of the poems had recalled for SA some family summer time in Wyoming; specifically, she had twinned a climb of a mountain with reading an Oliver poem and called them both “experiences” that had left her awed. I was looking for that entry.

I found all the others, set neatly in order, and I read few, reflecting back on the privilege a teacher has in seeing into the minds of others, learning fresh perspective, experiencing other worlds.

But the entry I’d recalled was missing, and that absence triggered a second memory. Where was it? Ah, yes, now I remembered: I’d sent it on to the poet herself, thinking that she would be pleased to have a reader who found “experience” equally on the mountain and in her poem. Who wouldn’t want such a reader? I’d reasoned, and I’d been right.

A week passed, and then a letter arrived. In the Courier font she favored, Oliver said that SA was the sort of reader she hoped for, a reader who found a poem much more than an intellectual exercise, or a few moments with a grouping of words. SA had entered her reading of the poem as she climbed into and through a landscape.

I was glad I’d sent the original.

In a few days, I’ll go to my local bookstore and get my ordered copy of Upstream. And then I’ll settle in to reading it, and I will go slowly upstream and through landscape. It will be, I know, an experience. 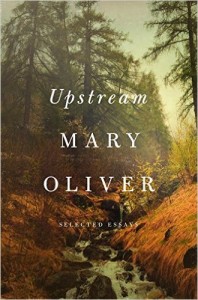