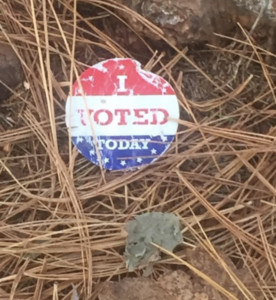 Today’s Great Awokening: Henry’s Tools Can Guide Us to Do Right

Posted on June 25, 2020 by Margaret Carroll-Bergman | Comments Off on Today’s Great Awokening: Henry’s Tools Can Guide Us to Do Right

“The fate of the country… does not depend on what kind of paper you drop into the ballot-box once a year, but on what kind of man you drop from your chamber into the street every morning.”  — Henry David Thoreau, “Slavery in Massachusetts.”

Henry believed that social reform began with the individual. His words rang true in the mid-19th century and, with time, are more relevant today, as our country confronts systemic racism and the legacy of slavery.

Henry stopped paying taxes to protest slavery.  In 1846, he was arrested for being a tax scofflaw and as a result spent one night in the Concord jail. He wrote “Civil Disobedience,” an essay which many consider the cornerstone of American democracy — the right and duty to protest, even at the risk of being jailed for breaking an actual law.

“Let your life be a counter-friction to stop the machine. What I have to do is to see, at any rate, that I do not lend myself to the wrong which I condemn.”  — Henry David Thoreau, “Civil Disobedience”

After the Fugitive Slave Act of 1850, which required enslaved people to be returned to their owners, even if the former slave lived in a free state, Thoreau and his family and friends became involved with the Underground Railroad and the Abolitionist Movement.

Frank Sanborn, one of the so-called Secret Six who secretly funded John Brown’s raid on Harpers Ferry and similar actions — describes Henry’s escorting a fugitive slave to the Acton railway station on December 3, 1859, the day after Brown was hanged:

“I engaged Mr. Thoreau to drive his friend’s {Emerson} horse to South Acton the next morning, and there put on board the first Canadian train a Mr. Lockwood, whom he would find at my house. Thoreau readily consented, asked no questions, walked to the Emerson stable the next morning, found the horse ready, drove him to my door, and took up Merriam, under the name of Lockwood, neither knowing who the other was.”

Unknown to Henry, he had taken on a dangerous task: Francis Jackson Merriam was one of John Brown’s raiders at Harpers Ferry. He did this without question to help a fellow human being.

For many white Americans, there has lately been a “Great Awokening” concerning the economic, legal, and educational institutions that keep Black and brown Americans in poverty. The senseless murder of a 46-year-old Black man, George Floyd, by a Minneapolis police officer brought home the systemic racism that exists in our country. Captured on a cell phone, no one could deny Floyd’s repeated cries “I can’t breathe” as he was pinned to the ground by an officer’s knee on his neck. These cries have now have become the bellows for reform.

As Thoreauvians we have inherited both tools and actions from Henry to see that social justice and reform are finally realized. We have Henry’s writings on “Civil Disobedience,” “Slavery in Massachusetts,” “A Plea for John Brown,” and “Walden” as well. All together, Henry’s example offers a guide for taking responsibility without question or hesitation so as to do right and not “lend” ourselves to the wrong, as Henry put it. This crucial period of social reform we are living in demands it.

Comments Off on Today’s Great Awokening: Henry’s Tools Can Guide Us to Do Right

Posted on May 6, 2020 by Margaret Carroll-Bergman | Comments Off on Afterday

During all the years I taught Thoreau’s work and through that larger span — ongoing — when reading him has prodded and settled me, I’ve missed noting his death-day, May 6. Realizing its passage on say, May 11, or some such proximate but late date, has always felt like a deficiency.

“What sort of reader and walker are you?” I said to self on more than one occasion. “At least nod to the man’s day of passing.” Never happened, and I offered myself the usual, mealy “he’s alive to me,” reasoning, and vowed weakly to do better. Never happened.

But here it is early on May 6, 2020, and here I am already a paragraph into remembrance. I’ve also just read The Roost and found Richard Smith’s fact-rich tribute, and so, here in the morning’s slant-sun — the right time, you will agree — I have Henry in mind. And still: my “recall” of this date has been one more instance of fortuitous bumbling.

In late April, as our new adherence to home wore on, I, like many of us, wanted more companion reading that was illuminating and distracting, words that wore spring’s rising light well. Slow pony that I am, it took a little while before, during a circuit of the living room, I stopped by our gathering of the blue-bound 1906 edition of Henry Thoreau’s Journal. Over the years, I’ve often chosen stretches of time where I read through a particular year at the calendar’s pace. “Let’s go to 1854 again,” I thought, recalling points of its passage, including Henry famous, terse note on August 9.

So, as May began, so did I. It was and is spring; what’s ahead, or, more aptly, what’s coming up?

For starters: “May 1. A fine clear morning after three days of rain — our principal rain-storm of the year, — raising the river higher than it has been yet.

6 A.M. — Up railroad. Everything looks bright and as if it were washed clean…” 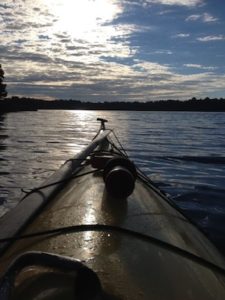 Even a pedestrian start soothed. Here it was, 6 A. M., light flooding in, and already we were off. It looked to be a long, light-filled, local day. Which it turned out to be. On that first May day, Thoreau went out three times, first on foot, then twice by boat on the swollen rivers. I would go out thrice too, even as our forecast promised rain. I thumbed ahead in the Journal to see how many pages the month would bring. In my volume, they summed to 88, one measure of May ’54’s expansive feel, a measure I hoped to feel one day at a time.

That May’s early pages are rife with notes of noticing. Its header reads helpfully, Observation and Life; Thoreau seems to swell with life just as the many plants and animals he finds do. Also, in that May’s early pages, I experienced a moment of sympathetic recognition that suddenly jarred.

The problem clicked clear: Thoreau and I were on to the same maple-time of spring, but I was not where he was. Instead, I live over 100 miles mostly north in Maine. My spring in 2020 was his in 1854.

So, here I am, and it’s May 6. The white pine’s needles are shining, as he said they did, and these eight years before he died, Henry Thoreau has nearly four pages of observations about life for me.

They are large, “There is no such thing as pure objective observation.” And little, “Horse-mint is an inch or two high, and it is refreshing to scent it again.”

They are the expansive and precise observations of his life and his world, and they offer me the nudge to go and inhabit my world as fully as I can.

I have set aside afternoon hours that will take me from the headwaters of a local brook I am getting to know into the forest full of glacial leavings that the brook drains. Who knows what I’ll find? I will be both Maine in 2020 and Concord in 1854, and I am getting the gift of being able to live locally in each.

“It matters not where or how far you travel — the farther commonly the worse —, but how much alive you are.”

What will tomorrow bring? On May 7, I will open this journal and this window and this door and find out.

Sandy Stott, formerly of Concord, Massachusetts, is a Brunswick, Maine resident. He is the Roost’s founding editor, and he writes for a variety of publications. His recent book, Critical Hours — Search and Rescue in the White Mountains, was published by University Press of New England in April, 2018; Tantor Media released an audio version of the book in February, 2019. He may be reached at fsandystott@gmail.com