Posted on May 5, 2020 by Margaret Carroll-Bergman | Comments Off on ‘Now Comes Good Sailing’ 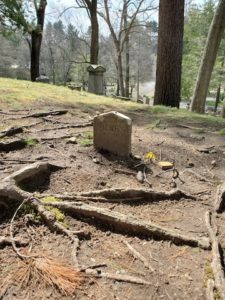 Henry Thoreau died from tuberculosis at his parent’s home in Concord, Massachusetts, on May 6, 1862. His mother, sister Sophia, and Aunt Louisa were with him at the end. Not long before he passed, Sophia heard Henry mutter the words, “Now comes good sailing”; he was 44-years-old.

Thoreau’s family and friends were understandably devastated by his death. His obituary appeared in newspapers across the country, yet it would be a stretch to say that he was anywhere near famous. He was called “original” and “genial.” One newspaper reported that Thoreau was “very peculiar in his views of society and the ways of life.”

In death as well as in life, Thoreau was considered by some an eccentric writer and by others, an imitator of Ralph Waldo Emerson. His life and writings were appreciated by few. At the time of his death, both of his books, “A Week on the Concord and Merrimack Rivers” and “Walden” were out of print.

It would be up to his sister and friends to remedy the situation and save Thoreau’s reputation. In a town that was filled with famous writers, it was ironic that Thoreau, the only native Concordian among them, was the least known.

Louisa May Alcott said, “Though he wasn’t made much of while living, he was honored at his death.”

And, the honors flowed. Emerson eulogized Thoreau at his funeral and Emerson’s tribute would later appear in the prestigious “Atlantic Monthly.” The magazine also published some of Thoreau’s essays posthumously, including “Walking,” “Life Without Principle,” and “Autumnal Tints.” The Boston publishing company of Ticknor and Fields  released second editions of both of Thoreau’s books, within a few weeks of his death.

Sophia would continue to work closely with Ticknor and Fields over the next few years, and, thanks to her, two of her brother’s best known books were published: “The Maine Woods”  in 1865 and “Cape Cod” in 1866. Both books were compiled from previously published essays and unpublished material from Thoreau’s Journal. Today, both books are favorites among Thoreau fans.

Thoreau’s best known essay, “Civil Disobedience,” was published in the 1866  collection of his essays, “A Yankee in Canada, with Anti-slavery and Reform Papers.” While “Civil Disobedience” had been virtually ignored when Thoreau was alive, this new release gained a new generation of appreciative readers. By the beginning of the 20th Century, Leo Tolstoy and Mohandas K. Gandhi both wrote of their admiration for “Civil Disobedience.”

Thoreau’s slow rise to fame continued. Naturalist John Muir acknowledged that Thoreau’s writings spurred his advocacy in the protection of Yosemite. After reading “The Maine Woods,” Theodore Roosevelt climbed Mount Katahdin to follow in Thoreau’s footsteps. E.B. White and Rachael Carson both wrote of their admiration for him and Jack Kerouac was influenced by “A Week on the Concord and Merrimack Rivers” to go on the road.

Which brings us to the 21st Century, where today Henry Thoreau is considered to be one of the greatest writers in American literature. “Walden” is required reading in many schools. Thoreau is considered one of the Founding Fathers of Environmentalism and Conservation. Anyone who protests anything will use “civil disobedience” as their battle cry; indeed, many people think that Thoreau himself coined the term (he didn’t). People of all political stripes, from Libertarians on the Right to Anarchists on the Left, quote him for inspiration. Hippies, punks, goths, say they “march to a different drum,” a phrase Thoreau used in “Walden.”

More than 150 years after his death, Henry Thoreau continues to inspire and influence us.

In 1862, Emerson believed that the country was unaware “how great a son it has lost.”

Today, we are very much aware of Thoreau’s greatness.

And, in a very real sense, these words have come true. Henry Thoreau has found a home in the hearts and lives of millions of people around the world.

Richard Smith has lectured on and written about antebellum United States and 19th-century American literature since 1999. He has worked as a public historian in Concord, Massachusetts for 21 years, specializing in Henry David Thoreau, the Transcendentalists, the Anti-Slavery movement and the Civil War. He has written six books for Applewood Books.