I left Concord, Massachusetts, Wednesday morning, September 25th, 1850, for Quebec. … I wished only to be set down in Canada, and take one honest walk there as I might in Concord woods of an afternoon. ~ Henry Thoreau, in his opening paragraph of  A Yankee in Canada.

Henry Thoreau and Ellery Channing made their Quebec trip at first by train and by steamer, and then took to the roads. Early this month, I joined a group of Quebecois and Americans to follow part of their walking path by car and on foot. The two-day outing was organized by Jacques Delorme and Jean Cloutier of Groupe de Simplicite Voluntaire de Quebec. We started in old Quebec city and ventured out into the countryside to the east, just as Thoreau and Channing did back in 1850. Along the way we saw many of the same sights, and we seemed to be truly following in their footsteps. Here is a short report to connect both trips.

As he rattled along the rails heading north, Thoreau “botanized” from the train. He noticed the woodbine, or Virginia creeper, turning its brilliant autumn red. It hung on trees “like a red scarf,” he wrote. “It was a little exciting, suggesting bloodshed, or at least a military life, like an epaulet or sash, as if it were dyed with the blood of the trees whose wounds it was inadequate to stanch.” Since this is one of my favorite natural observations from Thoreau, I made a point of searching for Virginia creeper during this visit. I wasn’t disappointed. The vine twirled around trees in the forests of the Adirondacks of New York. It rested on and took over fences in Canada. It hung from maples in Quebec, just as it had in Henry’s day. It is still here, still turning its signature maroon and crimson. 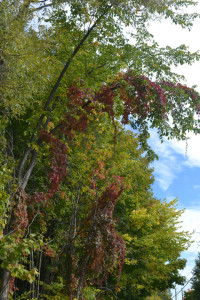 Virginia creeper on a tree in the Quebec countryside.

Like Thoreau and Channing, we toured old Quebec city. We saw the 1759 battle site of the Plains of Abraham, the citadel, the old city hall, the Wolfe-Montcalm monument, a few museums, and many other buildings and streets that Thoreau and Channing either saw or walked past. We three Americans kept saying to one another, “You know, we’re not that far from home. And yet it feels as though we’ve been transported to another place and time.” We meant this in a good and interesting way, of course. Thoreau must have had similar feelings. He wrote that after only two days of travel, “We were taking a walk in Canada, in the Seigniory of Beauport, a foreign country, which a few days before had seemed almost as far off as England and France. … Well, I thought to myself, here I am in a foreign country; let me have my eyes about me, and take it all in.” The trouble is that Quebec offers too much to take in. You can’t see everything at once, or even at all. 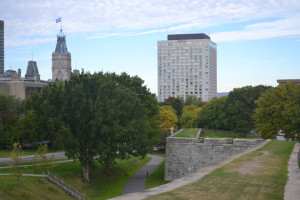 The citadel rampart and the city beyond.

We left the city and walked east along present-day Avenue Royale, the same road that Thoreau took into the countryside. We passed homes that were built of native stone in the mid- to late 1600s. Most had old family-owned stone root cellars built right into the hillside. We were lucky: we had reservations to stay at local inns for the night. But Thoreau had difficulties finding a place to sleep, since he saw no public houses along the roadway. The language barrier was part of his challenge, too. The home where he and Channing finally ended up belonged to Jean Baptiste Binet and his wife, Genevieve. “We here talked, or murdered French all the evening with the master of the house and his family, and probably had a more amusing time than if we had completely understood one another,” Thoreau wrote. At bedtime, the men had to climb up to a high chamber with a wooden rail around it to reach a bed outfitted with linen sheets. Although Quebecois researchers disagree on the exact Binet house that Thoreau stayed in, they say that one of the prime candidates is a building that operates today as a Mexican restaurant called Senor Sombrero. We stopped here to take a peek and to imagine the past. 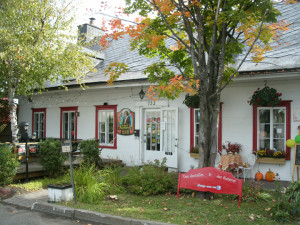 The former Binet home where Thoreau may have slept overnight.

As we continued on, we passed pick-your-own orchards with long lines of cars waiting for spaces to open in the parking lots. Random apple trees stood right next to the road, just waiting for passers-by to reach out and to grab a few samples for themselves. Apple-lover that he was, Thoreau took note of the trees here, too. “There were plenty of apples,” he said, “very fair and sound, by the roadside, but they were so small as to suggest the origin of the apple in the crab.” Later, when he and Channing walked on to Sainte Anne, someone brought them more apples. “They were exceedingly fair and glossy, and it was evident that there was no worm in them; but they were as hard almost as a stone, as if the season was too short to mellow them. … I declined eating one, much as I admired it.” And so he turned away from Quebec apples. Our own Henry Thoreau (aka historical interpreter Richard Smith) did not decline the opportunity. He and some others took a few bites of fruit. I did not imbibe. Those who did said they were good but that they leaned toward the tart or sour side. 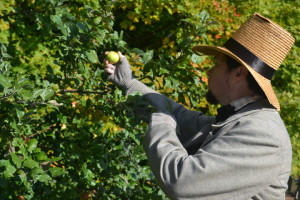 In crisp autumn sunshine, we walked between the hillside and the St. Lawrence River, where the natural geology makes for stunning waterfalls. The most spectacular ones are Montmorency Falls (Chute Montmorency) and Canyon Sainte-Anne. Thoreau and Channing scrambled around and admired both of these falls. Of Montmorency, he wrote: “It is a splendid introduction to the scenery of Quebec. Instead of an artificial fountain in the square, Quebec has this magnificent natural waterfall to adorn one side of its harbor.” Today both sites offer somewhat sturdy bridges so that visitors can walk above and over the falls. They can’t help those of us who have issues with heights, though. I wouldn’t have gotten over the Montmorency bridge without the support of several members of our group, for which I was grateful. I tackled the one at the canyon on my own – twice! both over and back! – but I did so on tiptoe, tentatively and gingerly, and without looking down at the water. I had to do it because I knew what lay ahead: the replica of the Walden house that had been built here years ago. Local people knew that Thoreau made his visit in 1850. The spot where you can first view the full length of the falls is now marked with a house built to Thoreau’s specifications. This was our final destination on this trip. Those of us who succeeded in reaching the house got signed certificates to show for our efforts. 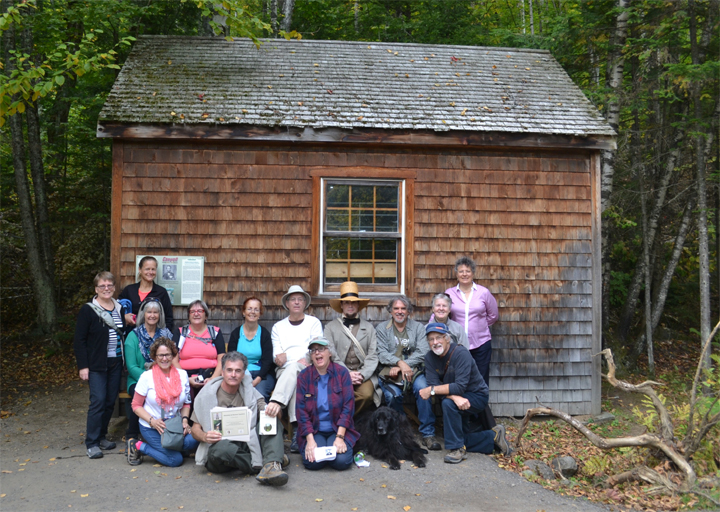 “I fear that I have not got much to say about Canada, not having seen much; what I got by going to Canada was a cold.” ~ The opening sentence of “A Yankee in Canada”

What we got 166 years later were good photographs, great stories and memories, and a passel of new friends. Oh, and something else, too: an invitation to come back next year and to take this honest walk once again. Well, you don’t have to ask us twice. We’re in! Does anyone else want to come along? 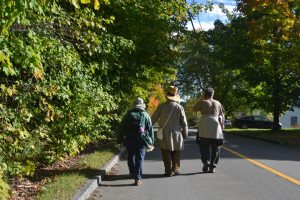 5 responses to “One Honest Walk”