It was going on 9 p.m., and I was in the mood for a candy bar. Alas, my cupboards were bare. Fortunately for me in times like these, I live just one block behind a strip mall anchored by a large grocery store. (When the garbage trucks come in the middle of the night to empty the metal dumpsters, this proximity doesn’t seem to be quite as wonderful and convenient as it is during daylight hours, however.) So I put on my shoes and jacket and went out into the night. It was a chilly but nice walk of a hundred or more steps along the macadam on my side of the street. It was quiet, too. No one else was out and about. Nice.

By contrast, the store was as startlingly bright and blazing as usual, although business was winding down toward closing time. I searched the checkout aisles for my favorite grab-n-go chocolate, then circled around to the only clerk still standing. He looked tired and bored. “I don’t have a card. And I don’t need a bag,” I told him. In less than a minute, I was back out on the sidewalk and heading toward the house, equipped with my treasure. I would wait to slice open the wrapper when I reached the kitchen.

Back here away from the parking lot, only corner intersections have streetlights. So I kept my eyes on the wide dark strip I recognized as macadam, to make sure of solid footing. Next to me were the various shades of gray representing my neighbor’s evergreens, lawn, and sundry bushes. I was almost next to his house when I was practically knocked over by an aroma. “Whoa.” I stopped and backed up a few steps. The lilac bush! I had forgotten that John had a nice purple lilac bush planted here. And who would have thought that the buds would be opening now? But of course they would. It’s the right time of the season, silly. I grabbed a thin branch and put its petalled tip to my nose. OMG. This is one of my favorite fragrances, ever. I inhaled it a few times and basked in the marvel, then reluctantly let the branch spring back to its brothers. My stomach was growling, and I needed to get home. 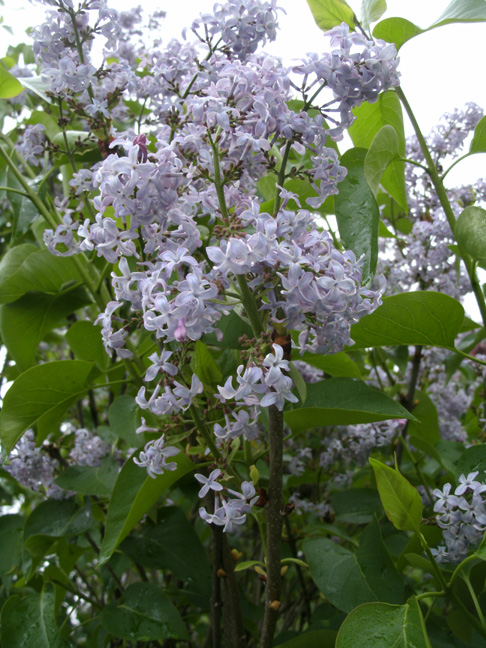 Lilacs always surprise me. By the time they burst forth, we’ve already seen the traditional colors of suburban Spring: yellow daffodils and forsythia, blue hyacinths and crocuses, pink flowering and Japanese cherries, and lots of other vivid flowers and trees. Many have lost their petals and are in leaf by now. And just when we’re getting used to living in a green world again, the lilacs show up. And boy, do they pack a punch! Maybe the others serve as mere appetizers, and the lilacs are the main event. This is not a bad thing, to my mind.

As much as I like lilacs, I have never attended a lilac festival. I know that the two big ones are in Rochester, New York (May 6-15) and on Mackinac Island, Michigan (June 3-12). But now that I think of it, I remember seeing a fair number of lilac bushes in various yards along the route of my usual mile-long neighborhood walk. I haven’t sauntered out there in a while. It’s time to go out again on a regular basis. You can be sure that I’ll take time to sample the fragrances of each and every bush. And this time, I won’t wait until the cover of darkness to do it.

We’re on our way to this reality, Henry.

6 responses to “Aroma After Dark”