The Season for Everything

This is the season for everything…There is time to watch the ripples on Ripple Lake, to look for arrowheads, to study the rocks and lichens, a time to walk on sandy deserts, and the observer of nature must improve these seasons as much as the farmer his. Thoreau, Journal, 4/24/59

Or try this one: by the time Geoff and I reach the south end of Scrag Island, we’ve stopped twice to warm our hands. The buoys say the water’s reading around 42 degrees, and, even with the sun square on our hands, that 42 trumps whatever the sun’s coaxed into the air. But the green water shines, and we’ve just watched an osprey brings strands of grass to its nestbound mate, perhaps a final lining for anticipated ospreylets. Both birds have keened at our nearness, and we have paddled farther off their island’s shore. 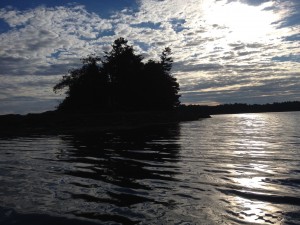 Our next aim, once we warm hands, is the eagle’s nest on Little Iron Island, a drama-site during 2014, with two eaglets compressing all the outrage of adolescence into a month before they finally fledged. One day we watched tantrum sticks fly from the nest, as an eaglet showed his displeasure…at what we didn’t know. The parent eagles, who shlepped out and back repeatedly with food, looked exhausted by July. For them it seemed the season for one thing only. Constant hunger, no sleep, and all these squalling demands – when will they fly, their posture seemed to say. And then, one day they did. 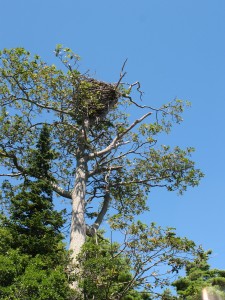 Perhaps 2014 put the parents off on this egg-to-eaglet thing, but whatever the reason, the nest was vacant in 2015. What about now, we wonder.

We float the incoming tide slowly by the iron-streaked islet; the nest is empty, even as it looks solid, looks like a house I would buy.

Well, on to the next of everything, and there it is, the up and down flight of the season’s first kingfisher as it hurls itself forward. With its outsized head and long tine of beak, it seems to need extra speed just to stay airborne; or perhaps it’s simply necessary speed in pursuit of everything.

For Henry Thoreau, Ripple Lake was Goose Pond, neighbor water to Walden, and for us it’s the cold water of Middle Bay. Everywhere, though, it’s time to watch the ripples.

Comments Off on The Season for Everything