Posted on June 25, 2015 by Sandy Stott | Comments Off on Catch a Lightning Bug

“Have not the fireflies in the meadow relation to the stars above, etincelant [twinkling]? When the darkness comes, we see stars beneath also. … Do not the stars, too, show their light for love, like the fireflies?” ~ Thoreau’s journal, June 16, 1852

This month, I’ve made a habit of walking in the early evening. Around 7:30 p.m. I head west. I move from my native suburban-scape to the confinement of small city streets: first passing 1950s brick homes set back on sizable yards, then pacing past older row houses with front porches crammed full of chairs and toys. Eventually I turn a corner and come back. My circular route is about 20 blocks long and takes most of an hour to finish. Along the way, I seek out Nature. I’m apt to encounter bounding squirrels and rabbits, squawking robins and catbirds, and weeds and wildflowers in bloom. I consider this walk an exercise for both physical and mental health. I look forward to it.

But one day in the middle of June, I got a late start. The sun was dropping quickly as I made my way toward it. Already the day lilies and other light-attuned flowers were closing up for the night. I figured I wouldn’t see much out and about. I knew my route well by this time, so I was in little danger of stumbling or fumbling, no matter how dark it got. Still, I know I walked a little faster than usual so I could get home before true nightfall. Silly me, I didn’t think to bring a flashlight.

As I hustled past a strip of edge woods, I stopped abruptly. Had I seen a little light in the foliage? Or were my eyes playing tricks on me? Was it already the season for lightning bugs? I waited a few seconds, and a tiny light blinked on and off again. Yes! A lightning bug! Were there more? I waited … and rejoiced that there WERE more. When was the last time I had seen a lightning bug? It seemed like years. And when was the last time I CAUGHT one? Oh now, that would be more like decades. 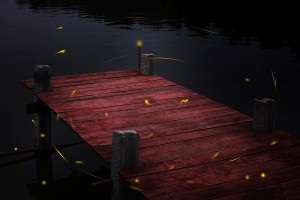 Not a stop on Corinne’s walk, but we like the bugs’ motion. Photo: Bigstock

For the rest of my walk, I craved the sight of the lights. I scanned the open yards and the areas near bushes. All of a sudden it seemed as if lightning bugs were beginning to rise out of the grass, everywhere. (I’ve never called them “fireflies.”) I couldn’t believe it. Was this their first night? Or had I been too house-bound to notice their arrival? It was, I was embarrassed to admit, the latter.

Henry Thoreau thought the lightning bugs shined like stars come to earth. (His journal entry posing this idea sounded similar to the time he saw clouds reflected in Walden Pond and wrote, “Heaven is under our feet as well as over our heads.”) But I didn’t look skyward to see if the stars had come out yet. My eyes were focused at ground level. I loved seeing these little flyers and their lights. I was a block from home when I decided that I wanted to catch a lightning bug before going in for the night.

“Where there was only one firefly in a dozen rods, I hastily ran to one which had crawled up to the top of a grasshead and exhibited its light, and instantly another sailed in to it, showing its light also; but my presence made them extinguish their lights. The latter retreated, and the former crawled slowly down the stem. It appeared to me that the first was a female who thus revealed her place to the male, who was also making known his neighborhood as he hovered about, both showing their lights that they might come together. It was like a mistress who had climbed to the turrets of her castle and exhibited there a blazing taper for a signal, while her lover had displayed his light on the plain.”
~ Thoreau’s journal, June 14, 1851

Leave it to Henry to create a medieval metaphor for the mating rituals of the lightning bug. I laughed at the thought of him running after them. But then I did the same thing. It sure is a challenge: to see in the dusk and to discern tiny dark and flying bodies against the dark background of the yard. The trick is to focus on one light. Let it blink a few times. Find and follow the moving body with your eyes. Then put your hand below the bug and lift it up. With any luck, the critter will be in your palm. Blinking.

I ran after one and missed it, and ended up with an empty hand. I homed in on another one and missed again. Fortunately, I was alone on the street; I hoped no one was watching from a window. Darn it, I used to be able to do this when I was growing up. Catching lightning bugs should be easy. How could I forget the technique? This should be just like riding the proverbial bicycle.

As often happens, the third time was the charm. When I brought up my hand, a lightning bug was in it. I held my breath as the little guy walked to the tip of one finger. I said hello, told it how beautiful it was, thanked it for letting me catch it, and wished it well. It spread its wings and took off into the air. I watched it blink away.

I was still smiling when I unlocked my door and walked back inside.