Posted on July 1, 2015 by Sandy Stott | Comments Off on Charted Waters

Like many who follow Henry Thoreau’s lines of words, I also find my tracks outdoors aligning – in some ways – with his. The other day, I arose and thought, It’s a good day for some boat-time, and so I went down to the sea (different, I know, from Henry’s river, but consistent with his love of watery exploration).

The early morning was still and wisps of fog hung above its glassy surface. I pointed up the bay and caught the helpful hand of the tide, easing along and watching the sun begin its work on a thin cloud-deck. Only a few lobster boats grumbling in the distance for company.

Near midday, I reached the point where my route turned south toward the sea again, and conveniently, the tide turned too. I had, by reading chart and tide tables planned this shift, and, as I eased along, I was pleased with myself. Which, of course, invited the attentions of whatever little god oversees my maritime adventures. 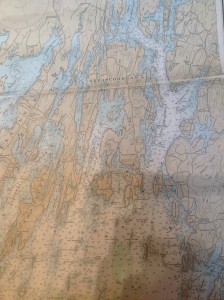 I was ready for a modest sea-breeze in my face. That’s a near-daily feature of the midday, and so I expected a little added work. But I’d also paid close attention to the chart – “surveyed it,” Thoreau might have said – and so I had a route that “hid” behind islands for much of the way. And the forecast had featured “light winds,” so even an exposed mile or so before my turn to the west didn’t worry me.

The tide coursing out from the New Meadows River is strong, in part because its deep channel means there’s a lot of volume. And those who fiddle in boats on the sea know also that when wind opposes tide (in this case south wind, tide flowing from the north) ruffled water sometimes results.

What I had not read closely, despite long experience and many minutes spent at the chart, was the way the land pinches the river at its mouth. There, water to 150 feet in depth flows between an island (happily named Bear) and a point (ominously named Fort). Why name this point Fort? I wondered. Ah, I reckoned later, because it overlooks the narrowest point in the river, and so it’s a good place to site a fort. 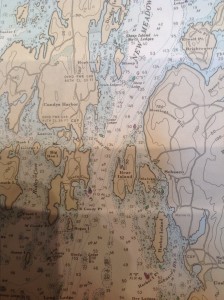 Here, on this benign summer day, was trouble. And work. A modest form of each, but each was recognizable too.

The breeze jumped to 10-15 knots; the waves roughened; even the two-foot swell, thus far a slow lifting and falling of the sea’s chest, joined in the action, merging with some of the chop. I cut through a few steep waves around 3 feet high. And, as the tide coursed by Fort Point, the water began to spin some; now the waves arrived from differing angles too.

Near my limit of skill, I pressed on, reciting a paddler’s mantra – keep your paddle moving and in the water. Balance depends upon this mantra. And slowly, at about a mile an hour, I made my way by Fort Point. There, the land falls away, the bay expands, and then the water relaxed.

A little later, after a rest on wonderfully named Rogue Island, I turned west and paddled an easy last leg in the mildest of breezes. I could have closed my eyes as I eased slowly home over my companion water.

More still to learn, I thought as I reviewed both day and chart that evening. As Henry Thoreau reminds us again and again, every day asks for our best attention, even when we’re on charted waters.