Posted on January 9, 2015 by Sandy Stott | Comments Off on Modern-Day Disobedience

“Action from principle, — the perception and the performance of right, — changes things and relations; it is essentially revolutionary. … A minority is powerless while it conforms to the majority; it is not even a minority then; but it is irresistible when it clogs by its whole weight.” ~ Henry David Thoreau, from the essay now known as “Civil Disobedience”

It was a moment of peace and magic. Forty of us stood on the muddy flood plain of the Conestoga River in Lancaster County, Pennsylvania. A woman walked around and blessed us with a smoking bundle of sage. A Native American man drummed and sang. The tones and the smoke called up the memories of the Susquehannocks who once lived in this place. Snowflakes breezed through the air. A bald eagle flew over, as if in silent support. The time felt sacred. The act felt like The Right Thing to Do.

We had come to this site to protest the building of a high-pressure natural gas pipeline. Behind us loomed a large red drill assembly that workers had been operating only minutes before to test the geological make-up of our bedrock. What they were finding was a lot of quartz and schist. This was no surprise to us. Once we arrived and surrounded their implements of destruction, the men shut off the machinery and retreated to their vehicles at the top of the hill. We could see them calling the authorities on their cell phones. We had clogged the process with our whole weight, and without touching anything or anyone. Now we waited for what would come next. It would probably include the appearance of the local police. 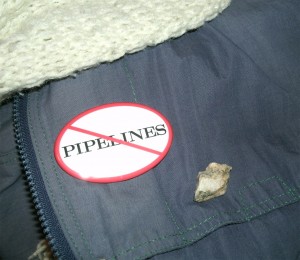 This pipeline is still in the proposal stage. But residents along its path have been protesting it for months. The goal of this Oklahoma-based company is to transport tons of natural gas from the fracking fields of northern Pennsylvania to a harbor in the Chesapeake Bay, where it can be exported and sent to other countries. The goals of our community members are to protect the land and our way of life. Carving a 42-inch pipeline through some of the most productive farmland in the country, as well as through conservation land and Native American archaeological sites, seems to be an ill-advised and unnecessary endeavor at best. Especially when no one here – except our governmental officials – will ever benefit from the project. This area includes the most seismically active portion of the state, too. People this morning had been talking about hearing booms and feeling shakes during the last two weeks. Perhaps the earth is already responding to the intrusion.

So far, our efforts have been limited to written and spoken words. I wrote my official protest letter to the Feds before the deadline last fall. I mailed copies to my legislators – all of whom had gotten thousands of dollars’ worth of campaign money from the pipeline company. I wrote a letter to the editor, and it was published in the local newspaper. I joined my township’s protest planning committee. I put an anti-pipeline sign in our front yard. I spoke on the subject at several township supervisors’ meetings. I’ve been lightly involved in the opposition. But apart from the sign in the yard, it’s all been a lot of talk, talk, talk.

Then came the e-mailed announcement, couched in secrecy. It revealed the details of a “non-violent, direct-action event.” We were asked to show up at this exploratory drill site at 9 a.m., to disrupt the work, and to see what happened as a result. We were advised to keep the time and place a secret, so that the workers wouldn’t be tipped off in advance. And the organizers were clear about the risks of arrest. We would be walking on presumed public land, owned by the regional electric company and not posted as private property. But if the police could prove otherwise, we could be arrested. Anyone wanting to avoid the threat of jail could leave the site at any time without harsh judgment from any of the others. But we had had enough Talk. It was time to Act.

I read the message, and I knew I had to participate. I had never done this kind of thing before. But what kind of Thoreauvian would I be if I didn’t stand up for the land and its people, and to simultaneously work to subdue the interests of one single greedy company?  I wanted to do this. I needed to do this. I also knew I had to draw the line at arrest. I had a 12:30 p.m. appointment that I had to keep, without fail. I could give the cause my best three hours. I hoped that it was enough.

So there we stood, in the cold and muddy marsh, along with members of the news media, waiting for the police to come. When they did drive up an hour later, the gray-haired chief was nice enough on the surface. He told us that he supported our First Amendment rights and the chance to express our opinions about what we believed in. But we were trespassing on the electric company’s land, he said. We were interfering with the company’s work. He warned us that if we were asked to leave and didn’t, we could be arrested as a result. Our leaders gave him a list of ordinances and issues that we wanted answers to. The chief accepted these papers, then walked back to the top of the hill to talk to the company workers, township representatives, and whatever other authorities he could drum up by phone. We just had to wait.

Our group gathered for a pep talk. Odds were good that arrests would be made when the chief came back and issued his final warning. How many of us were willing to stand firm? Some people quickly raised their hands. A few others looked at their phones and planners, figuring out the importance of the other commitments they had on tap for today. One voice said, “This is just our first work stoppage. There will be more opportunities to do this in the future. Is what we’ve done today enough for now? Or is this one so important that we should go all the way?” He was leaning toward leaving, I could tell. He looked like the kind of guy who could keep a busy schedule.

But another opinion chimed in. “If not NOW, then WHEN?” Murmurs of agreement answered her. In the end, though, we each had to make our own decision. Should we stay or should we go?

When the chief returned after an hour of negotiations, he brought us disappointing news. The permit issues that we had insisted upon didn’t apply to the pipeline company’s work because it was a utility. And the electric company still considered us to be trespassers. I didn’t listen to the rest of his explanations. I quietly turned and walked away, heading down the road to my parked car. Another woman hustled past me a minute later. “Are they arresting people?” I asked, without looking back.

“I thought they would.”

I got in the car and quickly drove straight back into the Real World, where life and business appeared to have proceeded without interruption from what we had done, demanded, and accomplished this morning. All sorts of feelings surfaced. I was proud to have participated in the protest. But I had twinges of regret about choosing not to be arrested in the end.

I wondered and worried about my fellow protestors for the rest of the day. It turned out that eight of them had been arrested. By early evening, they had all been released and were said to be back home “eating pizza,” our leaders told us. Our story – THEIR story, really – was front page news the next day. The protest had been picked up by the Associated Press and by a variety of environment-related news outlets, too. We were sort of famous, temporarily. I could find myself in the background of some of the photos floating around online. I was glad that I had been there.

What did I gain from this act of modern-day civil disobedience? A lot of self satisfaction in supporting a cause I believe in. A new anti-pipeline button. A small piece of schist-encrusted quartz that I picked up as a memento from the mud near the drill. And the reassuring scent of sage embedded in my winter coat. Still, no arrest record. And yet, after the pipeline company files its official proposal with the Feds in March, we may still have many such “direct-action” challenges ahead of us. I will likely have to make another tough decision on another day. And quite frankly, I’m not sure which way I’ll go. We’ll have to wait and see.

Corinne H. Smith is the author of “Westward I Go Free: Tracing
Thoreau’s Last Journey.” She is at work on “Henry David Thoreau for
Kids: His Life and Ideas, 21 Activities,” to be published by Chicago
Review Press in Spring 2016.