Not long ago, as winter settled heavily over us, I read in our local paper of a distant snow-story that made me smile. The story featured an avalanche, some snowmobilers and a moose. Not much room for good result with those variables, but here was surprise.

On a Sunday, three men, Marty Mobley, Rob Uphus and Avery Vunichich, set off on a snowmobiling outing some 50 miles northeast of Anchorage Alaska. Enough new snow had fallen to make the men wary of the slopes that rose above. Avalanches, even small ones, move with a speed and power that can outrun snowmobiles (or skiers) easily. As they drove through a pass on their way out, the three men noted a slope marked with both ski and moose tracks.

An hour later, on the way back, they arrived at the same slope and found that it had avalanched. When they saw movement the three men hurried toward it; that movement resolved not as a skier, but as a nose sticking up (barely) from the snow. And that nose was a moose nose.

The three men retrieved their shovels and began to dig. Some minutes later they had uncovered enough of the moose to allow it to move. The moose stood; the men stood back. Then, the moose ambled off. 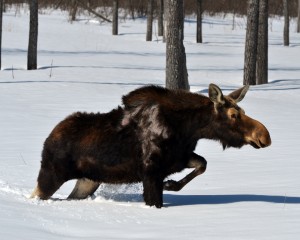 A moose, not the moose, in usual motion.

Imagine for a moment the moose packed in the snow. Avalanched snow sets quickly, firming up like cement; the moose was stored beneath it like an exhibit, but his nose must have scented the three men as they approached and then began to shovel. All those minutes of unnatural nearness until he could rise and resume the usual distance between moose and men.

And imagine the men working their shovels carefully along the sides of the stilled moose; imagine the man who brushed lightly the snow away from the great marbles of the moose’s eyes.

This entry was posted in General, Nature, News and Events, The Roost and tagged Anchorage Alaska, Marty Mobley. Bookmark the permalink.