Let Him Step to the Music He Hears

Posted on November 27, 2016 by Sandy Stott | Comments Off on Let Him Step to the Music He Hears

“What is there in music that it should so stir our deeps? We are all ordinarily in a state of desperation; such is our life; ofttimes it drives us to suicide. … But let us hear a strain of music, we are at once advertised of a life which no man had told us of, which no preacher preaches. … The field of my life becomes a boundless plain, glorious to tread, with no death nor disappointment at the end of it. All meanness and trivialness disappear. I become adequate to any deed.” ~ Henry Thoreau in his Journal, January 15, 1857

Earlier this year, I was interviewed for my hometown newspaper by reporter Tom Knapp. My book Henry David Thoreau for Kids had just been published, and Tom wrote a nice story about it and about me. Tom and I went to the same high school and have been acquaintances for the last ten years; yet this was the first time the subject of Henry Thoreau had come up in conversation. I was surprised but quite pleased to hear that Tom had connections to Thoreau and to Walden Pond himself. The interviewer became the interviewee, as I asked him questions in return. Here is his story.

Tom Knapp is a lifelong resident of Lancaster County, Pennsylvania. He works as a news reporter for the daily newspaper here. He also plays the fiddle and bodhran in a local Irish band. He first came to Thoreau and Emerson through his older brother Bill, who is a big fan and who read all of Thoreau’s journals. Bill passed some of that admiration on to his younger brother. Tom says, “I was greatly impressed by their forward-thinking views on our places in society, and our ability to step outside the norm as defined by other people’s expectations. I also very much appreciated their views on nature, and our responsibility to preserve the natural world. I like to think my exposure to Emerson and Thoreau at an early age inspired much of my personal philosophy. I remember as a kid typing out some of their quotes to hang on my wall. Indeed, right now I am trying to take Thoreau’s admonition to ‘Simplify, simplify’ to heart, as I try to rid myself of clutter!”

Although Tom has always been based in southeastern Pennsylvania, he occasionally travels across the Northeast and into New England, making what he calls “unplanned trips north,” letting spontaneity lead him and dictate where he should stop. “It was a whim that led me to turn off that first time when I saw a sign for Lexington and Concord,” he says. “Although I enjoyed exploring the towns, I was quickly drawn out to Walden Pond to see what was there. In those days I always traveled with my fiddle, and I never liked to leave it in my car. So when I headed out to walk down to the pond, I strapped it over my shoulder. I didn’t plan to play it; I was just carrying it as I walked. But after hiking around the pond to the site of Thoreau’s cabin, I was inspired by the mood of the woods. I only planned to play for a few minutes, but pretty soon I had a small audience of fellow hikers, so I kept playing.”

Tom had no idea that the natural acoustics of the water and the rims of the glacial kettle-hole would lead his Celtic tunes around to the sandy public beach. When he eventually walked back with his fiddle case slung over his shoulder, he was greeted by applause from the sunbathers and swimmers. They had heard his entire performance. 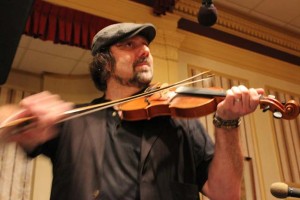 The experience must have invigorated the fiddler, because he has returned to Walden Pond several times since. “Usually I sit on a log somewhere close to Thoreau’s cove and play for a while,” he says. Once he was in the right place at the right time to become part of a treasure hunt involving a young couple. A man had planned to leave a series of clues for his girlfriend to follow. She would eventually be led to the Thoreau house site, where she would find an engagement ring waiting for her. The clue-planters asked Tom to stick around to provide impromptu music for what was sure to be a happy moment. Surprise!

Tom still owns a copy of Walden. One of his favorite quotes from the book is a popular one: “If a man does not keep pace with his companions, perhaps it is because he hears a different drummer. Let him step to the music he hears, however measured or far away.” He also likes the advice Thoreau once gave to friend H.G.O. Blake in a letter dated March 27, 1848: “Aim above morality. Be not simply good — be good for something.”

Tom agrees that Thoreau’s writings hold relevance for us today. He says, “Our lives are filled with gadgets and a network of communication systems that keep us connected to each other at all times of day or night. I think Thoreau reminds us that sometimes we need to be alone, to find the still places, and to enjoy the quiet, the solitude.”

And when we do, we may even hear the faint strains of a single Celtic fiddle, wafting across the Walden waters, offering to us that “which no preacher preaches.”

You can hear a sample of Tom’s fiddling at: https://www.youtube.com/watch?v=alN6slcAYuc