The Scent of Wood – Poet-stackers at Work

Posted on November 30, 2016 by Sandy Stott | Comments Off on The Scent of Wood – Poet-stackers at Work

There is a certain Irish woodchopper who, when I come across him at his work in the woods in the winter, never fails to ask me what time it is, as if he were in haste to take his dinner-pail and go home. This is not as it should be. Every man, and the woodchopper among the rest, should love his work as much as the poet does his. Thoreau, Journal, 12/12/59

Around 11:00 a.m. I heard the aural prod of the back-up-beeper, which, on this NH backroad, can only be warning away the tens of people who lived up this valley a hundred years ago. Compliant, as ghosts usually are, they scattered, and steadily, our neighbor from 4 houses down backed down our drive. His pocket-dumptruck was piled high with white-faced wood, jumbled behind a back-stack of order, where the metal door would usually be shut.

Dave jumped down from his truck, and we looked over the swell of land that I hoped he could back across and up so the woodpile would be close to the cellar bulkhead. “O, sure,” he said, eyeing the ground that slants like a wave that’s felt the sea-bottom and is intent on the shore, “I can get across that.” And so he backed over the ground-wave, got the truck-bed level, “so it won’t turn over when I raise it,” and dumped a cord of maple, beech and birch, with a sprinkling of oak. In doing so, he was ordering also a chunk of the remaining day.

In my 20s, I’d had a house heated partially by wood, and as I cruised town, I’d kept a lookout for developers who were opening up housing lots. Sometimes, in exchange for some tree-felling, I could get to keep the wood and haul it home, and so I’d gotten pretty adept at the cutting, hauling and splitting that made up the 6-or-so cords I burned each winter. Since then, wood-fires have become more atmospheric and ornamental, except when I visit end-of-the-road NH, which is where I was when Dave’s beeper summoned me.

Dave, like any veteran wood-seller, worked his way close to hoped-for dump-off spot, raised the truck-bed, and, as the chunks slid down, eased forward to get them all to ground. We exchanged a pleasantry or two and he took my check and drove off. I turned and surveyed all the wood, much of it whiter than my teeth; then I pried open the bulkhead, tossed a dozen chunks down and went after them to outline the stacks I’d envisioned. Soon, I hoped, Rolando and Eli, my brother’s two children, would arrive to help realize those stacks.

All of this buried my nose in a favorite scent. The sour smell of fresh-split wood works on my taste-buds, and it seems to intensify in the upper part of my nose. It also seems strongest at a little distance. If I lean in and touch-sniff the wood’s surface, the scent weakens a little, but a few feet away from the heap outside, or, at that distance from the stacks inside gives me maximum whiff. And it is an astringent, clean whiff, with a hint of what goes on inside a tree throughout its life, the up and down flows and the responses to the wheeling seasons.

Rolando and Eli arrived and we tossed chunks down into the basement, and, when a pile had formed, we went down too and began to set them in rows to dry. Using lally-columns as containment, we raised our rows, and they became a dense text, a sort of woodblock poem before us. Intuitively, just as you shape a sentence by fitting related words to each other, we slotted in the sharp-angled wood – the maple and the beech and the birch. The work wasn’t as playful as Frost’s “swinger of birches,” but as we bent and stacked, it was enough. Did we “love [this] work as much as the poet does his?” Perhaps not that much, but as work’s rhythm set up and we watched our stacks rise, we smiled. 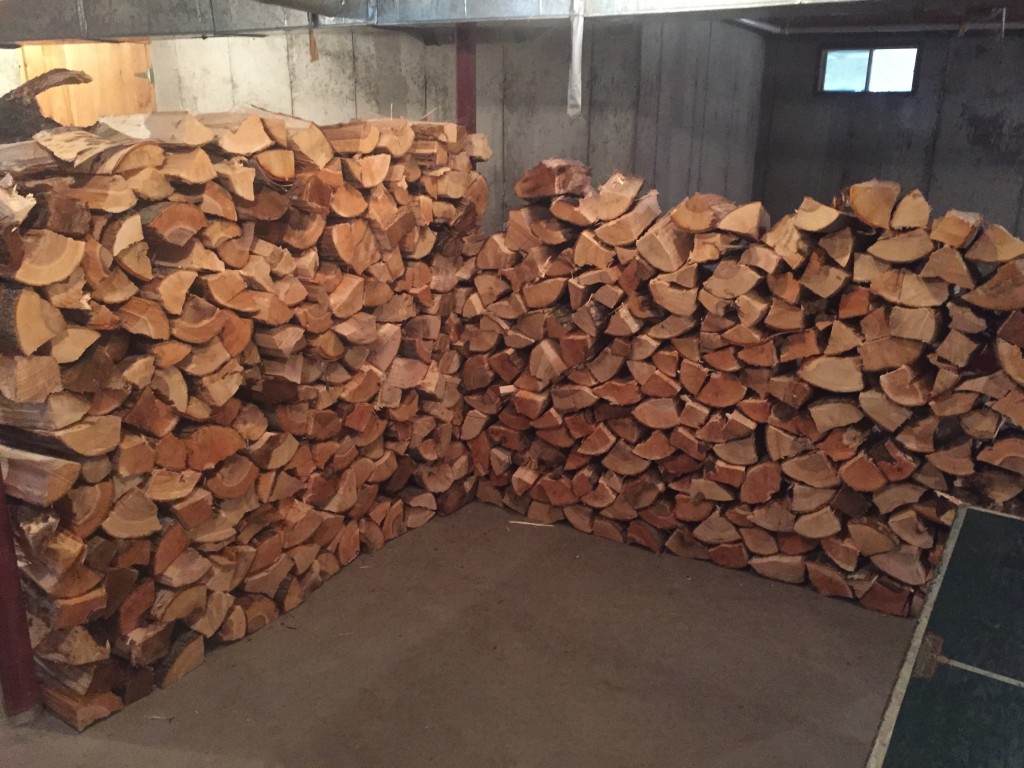 At work’s end, we decided that we were stacker-poets, and we had these two poems at right angles to one another to show for our time. Poems with a scent too.