Water Notes – of ducks and rafts and peepers (and eagles)

Posted on April 14, 2016 by Sandy Stott | Comments Off on Water Notes – of ducks and rafts and peepers (and eagles)

“These deep withdrawn bays, like that toward Well Meadow, are resorts for many a shy flock of ducks. They are very numerous this afternoon.” Thoreau, Journal, 4/17/52

Just as winter past seemed reluctant, seemed never to fully arrive, so too, thus far, our spring. I realize that I write this from Maine, an Eliotland where April’s often likened to cruel illusion rather than a real season, but still…even Mainers yearn for a mild day, when the hair on your arms lies down like a dog content.

But cold or no, spring keeps announcing itself, and for me, the urgency of that announcement joined two calls overheard recently.

While cold-water paddling the other day, my friend Geoff and I came upon a raft of ducks that formed a comma more than a quarter mile long in the middle of the bay – more than a “raft,” perhaps we should call such a duck-gathering a “ship” or a “flotilla” of ducks. Anyway, it was an impressive piece of feathered punctuation curved across the water. 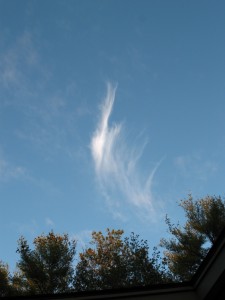 The duck-comma looked a little like this cloud, except, of course, on the water.

Rafting-up’s also a term in kayaking that describes a temporary bonding of boats for stability, for respite. To do so, you simply sidle up parallel to each other and lay your paddles across your foredecks, and then lay your hands on top of the paddles; this gives you a joined formation that allows for chart-reading, snacking, relaxing, etc. with no need to keep a paddle in the water for stability

Such rafts, all rafts are makeshift craft, cobbled together for a time before their parts float or fly away. Here, we are duck-like in our joinings.

As we drew near, curious sound floated our way over to the water. Any number of this multitude of ducks were making a sound like peepers, which also have just emerged in our vernal pools and bogs. And then I wondered, (fancifully, I know) if the ducks had learned their one-note song from hanging out in swamps inland.

But, on longer listen, their group sound was less frantic than that of our frogs with their shrill, gotta-have-it-now trill that’s so aptly mimicked and amplified in the movie Psycho. There, it stands for the drive of perverse appetite that’s just around the filmic corner, and it stands your hair on end. Our ducks were more in mutter’s register than in pulsing matter’s; no need to paddle for our lives.

Anyway, it was a fine vision and sound, even as we tried to stay at respectful distance to keep them from flying (which would have been other-spectacle, but not one we’d like attributed to us). So, exactly which duck-folk they were remains mystery only to be known if they’d flown.

Not far from the duck-water, we noted a vacancy – the eagle’s nest on Little Iron Island sat empty in its oak. It is a handsome construction, and we wondered why it had no family this year. Perhaps, we speculated, the parent eagles were still exhausted from raising the eaglet we had named August, as we’d witnessed any number of tantrum-moments as August grew. During one fit, sticks had actually been flung up and out of the nest amid great squalling; the parents sitting wearily on branches to either side had simply looked at each other and endured. Maybe next year we’ll forgo this, they seemed to say. 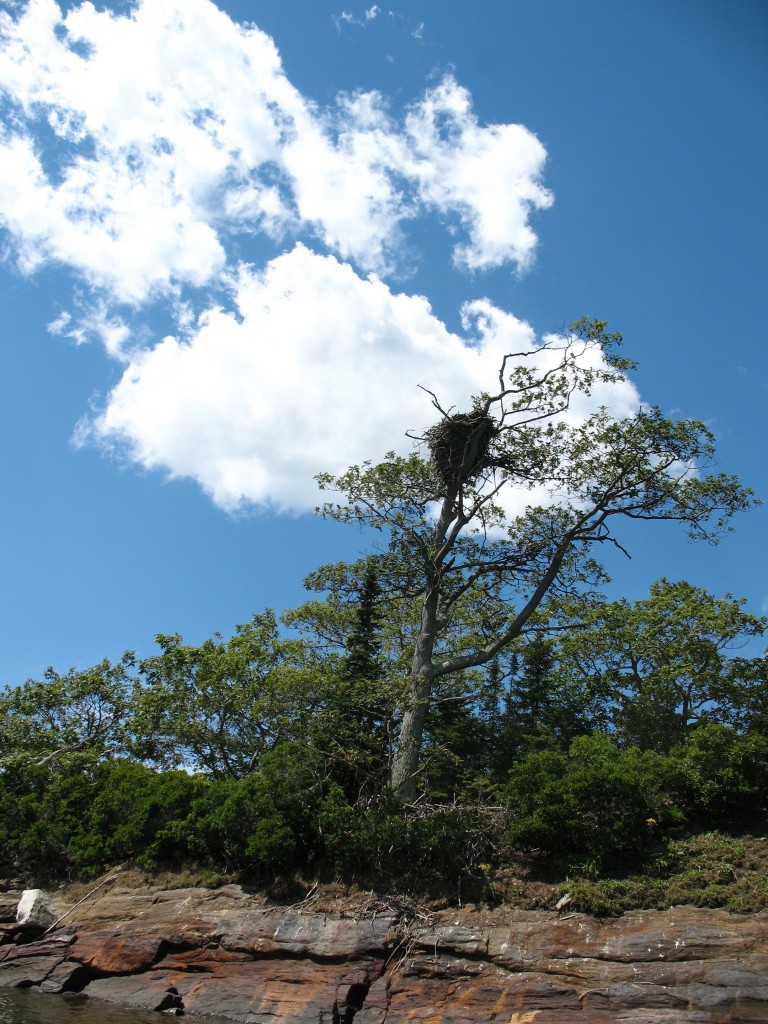 Otherwise, the day featured expanses of cold, blue-greeny water, and also the sight of an osprey bearing grassy stringers to its nest-in-the-making, though the nest was already pretty impressive in outline, and so the grassy stuff might have been comfort-lining. May they both be comfortable until the little ones hatch, at which point they, like all parents in the 24-hour cycle of infants, like August’s eagles, will both be weary ospreys. 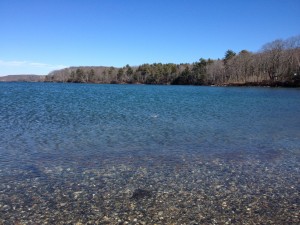