The Breath of the Morning Bird

Posted on April 16, 2016 by Sandy Stott | Comments Off on The Breath of the Morning Bird

The air is full of the notes of birds, — song sparrows, red-wings, robins (singing a strain), bluebirds, — and I hear also a lark, — as if all the earth had burst forth into song. The influence of this April morning has reached them, for they live out-of-doors all the night, and there is no danger that they will oversleep themselves such a morning. ~ Thoreau’s journal, April 2, 1852

Each spring I look forward to hearing what I call the First Bird of the Morning. He’s the first one to wake up and the first one to sing his song. He sings for a few minutes, then he stops. There’s a momentary pause throughout the neighborhood. (For all I know, the other birds may have groaned, mumbled, and hit their snooze buttons.) After 20-30 minutes of relative calm, the rest of the avian residents finally wake up and chime in, with the First Bird of the Morning leading the chorus. It’s a lovely symphony that filters into the inch of air allowed by my open bedroom window.

Over the past decade, I’ve witnessed different species claim First Bird status. The first year I paid attention to this phenomenon, a robin took center stage. The next year, it was a mourning dove. I’ve heard first melodies from a house finch, a Carolina wren, and from someone I could never quite identify. This year, my First Bird is a song sparrow. And what a singer he is! He seems quite proud to have claimed the first arbor vitae bush next to the carport. He wants to tell the world exactly where his new home is. And his favorite stage of all is the stop sign at the corner.

Yesterday, my morning started like any other. I got up at 5 a.m. and fired up the computer and the teapot. By dawn I had finished with e-mail and social media and had turned to work on current projects. The morning bird music was “on” in the background. I heard the song sparrow again as a soloist after the sun had come up over the horizon. I thought I knew where he would be sitting for his performance. And sure enough, when I looked out the living room window, I saw him perched on the top edge of the stop sign. 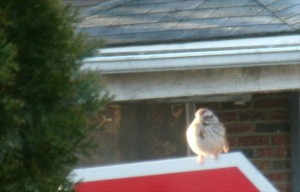 But as I watched him rear back his head and offer his beautiful tiny notes to the sky, I saw something else, too. We had been under a frost warning overnight. No white coating covered the grass, but the outside thermometer still hovered around 30°. Accordingly, each time the First Bird sang, little white puffs of his breath came out, too. I had never seen such evidence of bird breath. I stood transfixed and said “Wow” with each delivery. 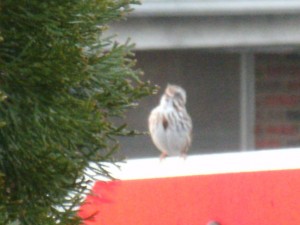 It was the smallest possible sighting, really: the exhalation of a warm-blooded creature into the chilly atmosphere that surrounded him. An inconsequential observance, most would say. And yet it struck an immediate chord with me. How often do we remember that these animals are breathing the same air that we are? That their little bodies have functioning life systems like ours do? (Each one “a parcel of vain strivings,” as Mr. Thoreau might say.) Probably rarely, if ever, and not as much as we should. But it’s solid proof that we are all connected by living together on this same home planet. I wonder if he saw MY breath in return when I carried the garbage bag out to the curb a few minutes later.

I grabbed the camera and tried to get photos of First Bird, but I can’t seem to get him in focus. You can get an impression of him, but you can’t see exactly what I saw. You’ll just have to take my word for it. The picture remains clear enough in my own mind’s eye. 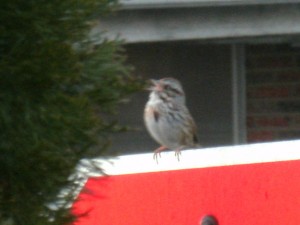 As I type these sentences now in the following morning, I hear the song sparrow again. Sure enough, he’s sitting on the stop sign. But the air is a few degrees warmer than it was yesterday. I watch intently and I don’t see puffs of his breath. Too bad. I will always remember what they looked like, though. And I will remind myself to always acknowledge that he and I – and all the rest of them — are indeed fellow creatures sharing one single environment.

Editor’s Note: Corinne’s recently released book, Thoreau for Kids, drew a very fine review in the Chicago Tribune the other day. Here’s a link to that review: http://www.chicagotribune.com/lifestyles/books/ct-prj-henry-david-thoreau-for-kids-20160414-story.html