“To Philadelphia. 7 A. M., to Boston, 9 A. M. to New York, by express train, land route. … Arrive at 10 P. M.; time, four hours from New York, thirteen from Boston, fifteen from Concord. … [The next day I] Looked from the cupola of the State-House, where the Declaration of Independence was declared. The best view of the city I got.”

No, these words weren’t written by Pope Francis during his visit to Philadelphia. They’re from Henry David Thoreau’s journal from November 1854. Our favorite transcendentalist had made the journey south by train to the City of Brotherly Love in order to deliver a lecture at the Spring Garden Institute. It was the only time he visited the place, and it was the farthest south he would ever travel.

Most likely, you have seen some of the footage from Pope Francis’s time in Philadelphia. He was a busy man. Among other activities, the Pope gave a speech in front of Independence Hall. He attended the World Family conference. He rode along the Benjamin Franklin Parkway several times. He attended an evening concert and conducted a mass on a special stage set up in front of the Museum of Art. Thousands upon thousands of people came from around the world to catch a glimpse of him, to be blessed by him, and to eagerly listen to his messages. Many more watched him on live broadcasts from home.

By comparison: Henry Thoreau was hardly famous when he was here. He had just published his second book, “Walden; or, Life in Woods.” But instead of talking up his time at the pond to his Tuesday-night audience, Henry had decided to give the lecture he called “The Wild.” Eventually it would become the second half of his essay, “Walking.” It now includes two of the most quoted Thoreau sentences we know today: “In Wildness is the preservation of the World;” and “In short, all good things are wild and free.”

Thoreau reached Philadelphia on Monday night. He had all of Tuesday to tour the city. Thanks to his escort — Emerson friend and local Unitarian minister William Furness — he hit some high spots. Literally. Mountain-lover Thoreau climbed eight stories to reach the top of the cupola of Independence Hall and to get a higher view of downtown. He also climbed the hill behind the Fairmount Waterworks along the Schuylkill River, in order to see the city from its western edge. Then he and Furness spent time examining the exhibits at the Academy of Natural Sciences. Thoreau was amused to see that the moose on display in Philadelphia was not as large as the one he had seen in Maine the year before. 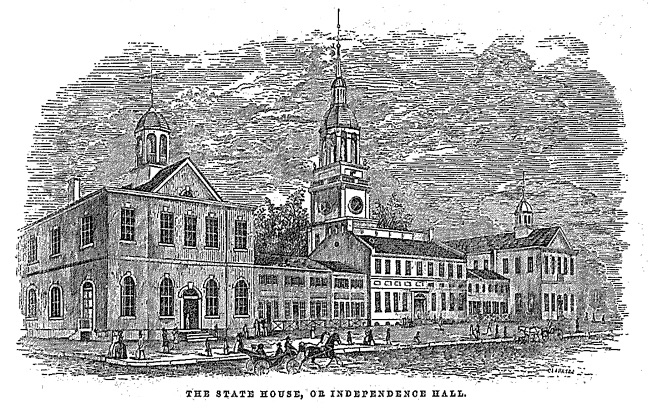 Independence Hall as depicted in 1852

By comparison: Pope Francis spoke to thousands of people – not only in front of Independence Hall; but also in front of the Museum of Art, which now stands upon that hill next to the Fairmount waterworks. When he rode along the parkway in the Pope-mobile, he passed right by the Academy of Natural Sciences. The museum is in a different building and in a different part of the city than it was in 1854. But it still has a moose on display. It turns out that Pope Francis and Henry Thoreau stopped in some of the same places and followed some of the same routes across the city, 161 years apart. 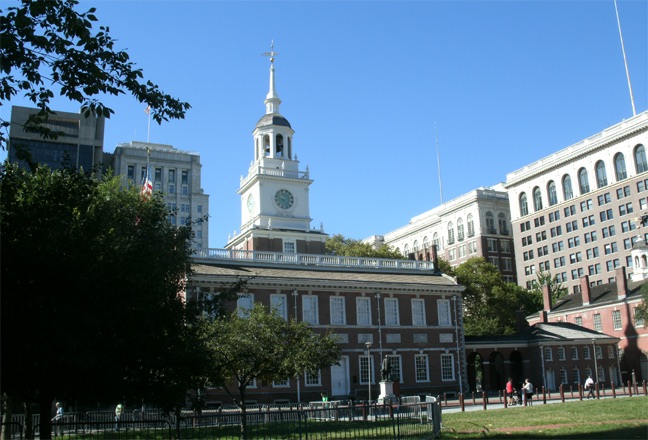 Alas! According to our best information, Henry Thoreau’s lecture was barely noticed by Philadelphians. No review of it appeared in the newspapers. Even Reverend Furness hadn’t been able to attend it. Furness wrote to Emerson that from what one of his parishioners had said, it sounded as if “the audience was stupid & did not appreciate him.” A scholar in the 1960s was only slightly more polite when he summed up his research on Thoreau’s trip this way: “It is hard to escape the conclusion that his impact on Philadelphia was even less than a soft thud.” (Charles Boewe, “Thoreau’s 1854 Lecture in Philadelphia,” English Language Notes, December 1964.) Henry Thoreau’s message of the importance of having wild areas to explore must have fallen on few and deaf ears.

By comparison: In 2015, it’s good to see that SOMEONE has delivered a series of successful speeches in Philadelphia, and to a massive and receptive audience, at that. And on this American trip, Pope Francis continued to repeat his concerns about saving the environment. What do you know? Perhaps “The Wild” is finally Landing with a loud thud here.

Corinne H. Smith will be speaking on “Henry David Thoreau: From Concord to Philadelphia … and to Us Today,” at the Philips Autograph Library, West Chester University, West Chester, Pennsylvania, on Saturday, October 17, 2015, from 10 a.m. to noon. For more information, see http://wcuhealthsciences.ticketleap.com/henry-david-thoreau-from-concord-to-philadelphia/.

One response to “In Philadelphia”