The Yellow Flower “not in Gray”

When Henry Thoreau came upon a plant he didn’t know, he described it as best as he could in his journal or field notebook. He counted leaves and petals and other parts, and he noted the habitat where it grew. Sometimes he drew a picture of it. Sometimes he could later identify the specimen by consulting his botany books. One of his favorites was “Manual of the Botany of the Northern United States,” compiled by Asa Gray of Harvard. Amateur scientists from all over the country sent samples of the plants in their region to Professor Gray, so he could include them in his next edition. Still, well into the 1850s, not every American plant was known or classified. At times Henry had to admit in his notes that something he had found on his own was “not in Gray.”

I thought of this phrase back in late March and early April, after I saw a patch of beautiful early Spring wildflowers that I didn’t recognize.

I had to deliver flyers to a home-run business in our area after hours. The place was in the midst of having its front steps rebuilt, so the main path was condoned off. I had to make a detour and step across two lawns to reach the sidewalk leading to the porch. That’s when I saw them: dozens of low yellow flowers covering most of the front lawn. They were wonderful! They were new to me. And I probably would have walked right past them if the steps hadn’t been broken. I tiptoed around the plants, took care of business, then came back to look at the flowers again. With no camera in my pocket, I studied them as closely as I could. I wanted to memorize them and burn their images into my brain. Surely once I got home, I could figure out what these flowers were.

But once I drove away, other tasks intervened, and I was distracted. I hoped to go back and to take a good picture of the flowers. By the time I did this a week later, the petals had closed up and they had turned dull. I took some photos anyway, thinking I could match the distinctive leaves with the guidebooks in my home library. 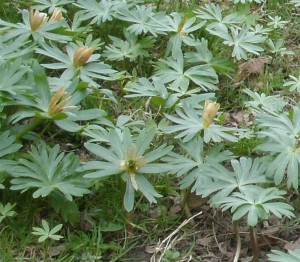 This time I took action. I gathered all of my references together – the Grays of today – and I searched for these yellow flowers on the pages. I thought I had an advantage over Henry Thoreau because his guidebooks didn’t include photographs or even line drawings. Mine did. And some were even organized by the color of the flower. Surely I could just turn to the yellow section, and I would spot my new discoveries there.

But I didn’t. Nothing on any of these pages matched these flowers. They were “not in Gray,” so to speak. How could this be? They were growing profusely in that yard. They couldn’t be unique or endangered or rare.

Maybe the owner could tell me what they were, I thought. I found the e-mail address of the business, and I sent a message asking about the flowers in the front yard. A woman named Claire replied a day or two later. “Those little yellow flowers have been popping up every year for at least as long as we have owned this house. (38 years),” she wrote. But she obviously couldn’t offer any more advice.

I was frustrated. How could something this easy become so difficult? I casually searched online for “yellow flowers ground cover.” None of the results looked good. This was exactly the wrong way to go about this investigation. Gradually the right approach came to me: When in doubt, ask.

A passel of my Facebook friends are naturalists or gardeners. I figured someone online could help. On April 7, I posted my photo and posed the question to the group. “Does anyone know what this ground cover is? It had brilliant yellow flowers (multiple petals, more than 4 or 5) two weeks ago. Now they’re gone. But I still want to know what this plant is. It’s growing on a shaded bank of someone’s yard in southeastern Pennsylvania. And the owner doesn’t know what it is. She says it’s been coming up each spring for more than 30 years, though. It’s not swamp buttercup. I can’t match it to anything in my plant books. Darn.”

Bingo! By the end of the day, I had my answer. After several questions from others and a few miscues, Thoreau Farm master gardener Debbie Bier stepped up and supplied the correct name. My new yellow friends were called Winter aconite, Eranthis hyemalis. I had never heard of this species. But the online photos matched what I remembered seeing. Yes! 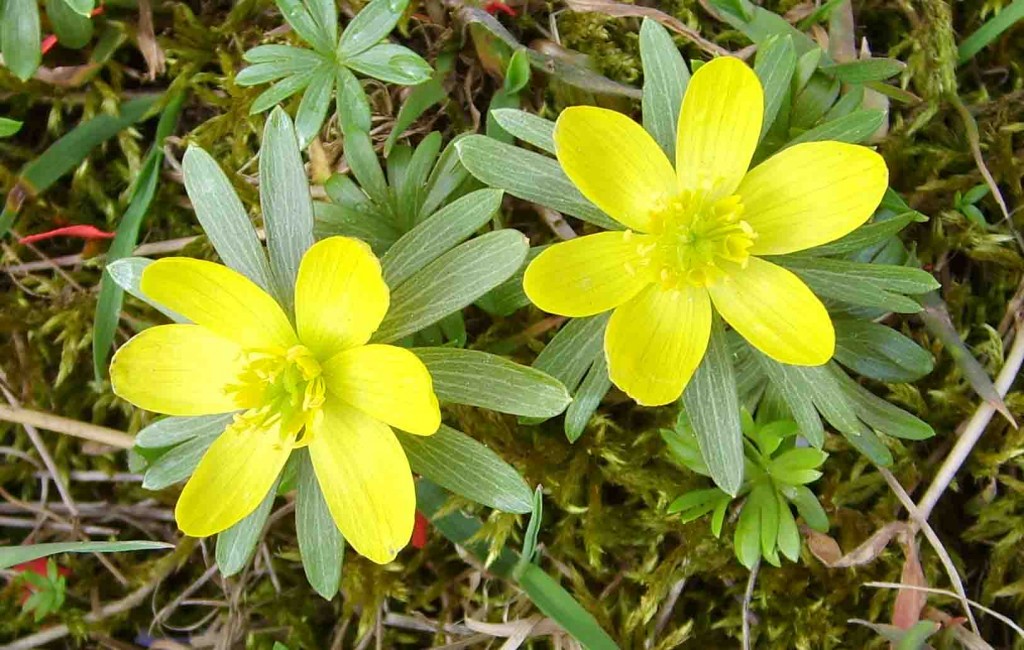 I went back to my reference books and looked up the flowers again, thinking I had missed them the first time. I hadn’t. None of the books listed Winter aconite by common or by scientific name. It’s a European native, which may explain its absence in American books. I was lucky enough to learn of Winter aconite only by sight, by being inquisitive, and by knowing someone who knew its identity.

It’s too bad Henry Thoreau didn’t have access to digital photography and Facebook to help him identify his own stash of unknowns. Using our connections today, he could probably solve the mysteries of every one of his plants that during his time were “not in Gray.”

2 Responses to The Yellow Flower “not in Gray”