June 2, 1860: “A catbird has her nest in our grove. We cast out strips of white cotton cloth all of which she picked up and used. I saw a bird flying across the street with so long a strip of cloth, or the like, the other day, and so slowly that at first I thought it was a little boy’s kite with a long tail.” – Journal

They are four, our shells gathered from a recent beach-walk – somehow a few, and not always the pristine ones, make it into a pocket and then the car each time we go. And for the past few days they’ve been mellowing on the front deck, waiting either inside arrangement or return to the beach on a next walk.

Yesterday, however, the shells began to move. I’d been out for a walk in local woods, and when I ambled back home, two of the shells were gone. Not far, mind you; they had shifted…somehow…to the far side of the driveway, where, amid the pine needles, they looked lost. I shrugged and put them back with their brethren.

The next morning the same two shells had vanished again. Again, not far: this time they were on the front lawn. I picked them up, puzzled over them a bit, placed them in their foursome and began to wonder – who or what either objects to these shells or finds fascination in them? Later in the day they were back in the driveway. Our resident chipmunk? One of the myriad gray squirrels? The chickens that reside in the pines across the street? Some unknown skulker? Or, perhaps, the catbird that “talks” to me whenever I’m in the yard, following me and speaking in its many tongues wherever I go. 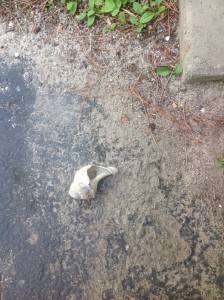 The shell most often moved.

I replaced the shells, evening came on, and, after dinner, I took a stroll around the neighborhood, going, for a change counterclockwise. Part way around I realized that I’d arrive back at our house unseen from the shells’ point of view. As I neared home, I slowed to a quiet creep, and then peered around the car’s fender and in at the shells.

Aha! There he was, suspect #1 during my afternoon mulling of possible shell-shifters. The catbird, he of a hundred voices; also he of the rhododendron along our house front, which borders the deck of shells.

As I watched, the catbird seized the small conch that is easiest lifting and hopped two steps into the driveway; then, with a flick of the head, he flung it a foot farther. Hop hop; grab the conch; hop hop; fling. Repeat until you reach the driveway’s middle.

Satisfied with this new placement, the catbird returned to the other shells, tapped and considered them for a long minute, and then – who knows why – he flew into the rhododendron and began to sing. I left as he sang what now I hear as his shell-moving song.

Now, it’s night. The gray tree frogs are calling indefatigably, and some unidentified laugher has come, laughed and gone. I wonder if the catbird has been back to the shells, if under night’s cover, he’s been hopping and nudging the largest of the three toward deck’s edge. I’ll see in the morning. 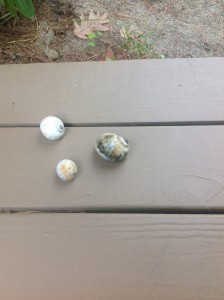