In Celebration of “the Citizenry of All Things within One World”

Posted on April 21, 2015 by Sandy Stott | Comments Off on In Celebration of “the Citizenry of All Things within One World”

there – so rich
are their records that
even the page-skipper-

chirr whee – to denote
what’s heard
day after day as

they set out to find themselves.

Who then can resist “sailing
in the rain” on April 22, 1856
or sailing with today’s rain coming

on, or the rippling east wind
and finding that even Henry
tried as he held the tiller

to hold too an umbrella
to keep himself dry? Or
knowing that a sudden

“seizure of happiness”
can come on at walk’s end
on this quietest of mornings?

Here then, in celebration of this 22nd, are short excerpts from two voices that I turn to when I want to hear from and of the earth, which is another way of saying every day.

Soon after I turned about in Fair Haven Pond, it began to rain hard. The wind was but little south of east and therefore not very favorable for my voyage. I raised my sail and, cowering under my umbrella in the stern, wearing the umbrella like a cap and holding the handle between my knees, I steered and paddled almost perfectly sheltered from the heavy rain…From time to time, from under my umbrella, I could see the ducks spinning away from me, like great bees…But though my progress was slow and laborious, and at length I began to get a little wet, I enjoyed the adventure because it combined to some extent the advantages of being at home in my chamber and abroad in the storm at the same time.
– Henry Thoreau, Journal, April 22, 1856 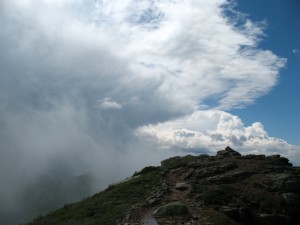 Once, years ago, I emerged from the woods in the early morning at the end of a walk and – it was the most casual of moments – as I stepped from under the trees into the mild, pouring-down sunlight I experienced a sudden impact, a seizure of happiness. It was not the drowning sort of happiness, rather the floating sort. I made no struggle toward it; it was given. Time seemed to vanish. Urgency vanished. Any important difference between myself and all other things vanished. I knew that I belonged to the world and felt comfortably my own containment in the totality. I did not feel that I understood any mystery, not at all; rather that I could be happy and feel blessed within the perplexity – the summer morning, its gentleness, the sense of the great work being done though the grass where I stood scarcely trembled. As I say, it was the most casual of moments, not mystical as the word is usually meant, for there was no vision, or anything extraordinary at all, but only a sudden awareness of the citizenry of all things within one world: leaves, dust, thrushes and finches, men and women. And yet it is a moment I have never forgotten, and upon which I have based many decisions in the years since.
– Mary Oliver, from the essay “The Perfect Days” in the book Long Life. 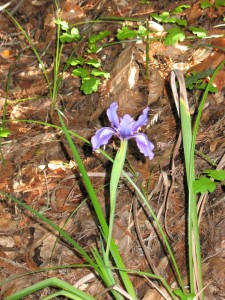