Feathers of a Bird

Wednesday is garbage pick-up day on my street. The recycling truck comes first, usually before breakfast. The regular truck follows a few hours later. My routine is to put the recycling bin out at the curb when I hear the noise of the truck a block away. Then I know I have time to gather the week’s other garbage into a bag or two.

Last week, I placed the recycling bin on the sidewalk just as the sun was coming up. Then I headed back to the house along the driveway. I looked down to admire how green the grass was turning, now that Spring has come and our days are warmer. Suddenly I spotted a white and gray feather lying in the grass near the macadam, all by itself. I picked it up to inspect it. It was blue-jay like, except that it had no blue. 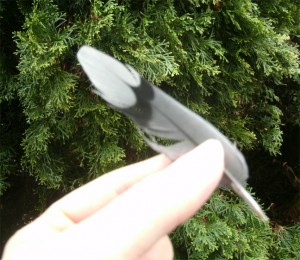 I brought the feather into the house to look at it again. I made the mistake of showing it to one of the cats, who wanted to chew it. I took the feather away from her, washed it off, and put it on a shelf out of her reach.

The recycling truck came along and took our plastics away. When I went out to pick up the empty bin, I looked down at the grass again. Wouldn’t you know, I saw ANOTHER feather! It was very similar to the first. Why hadn’t I seen this one when I spied the other? I had no idea. I brought it in and put it on the shelf, too. 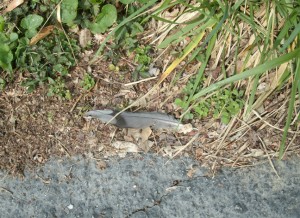 A short time later, I dragged two full garbage bags out to the street. Again, on my return trip, I looked at the grass. And again, here was yet another feather! 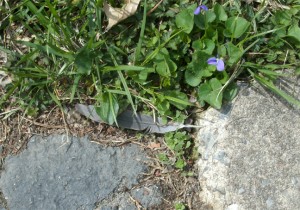 Okay, now I began to worry. Next, I expected to stumble upon a dead body. Now that I had found three feathers, I widened my view and searched for more. I soon found an all-gray feather in the front yard, and another striped one on the other side of the driveway. Thank goodness, I had found no dead bird. But there must have been a mishap of some kind. Maybe a stray cat had chased it and nipped at it. Maybe the neighborhood hawk had carried it away. Maybe the bird had gotten too close to a branch and scraped itself, jarring loose a few feathers. I’m not sure that this last scenario ever happens. But then again, I’m not a songbird. How could I know?

A few days later, when I mowed the lawn, I found another gray feather. This brought my total to six. I could study them and look at them more closely, as Mr. Thoreau would have done. The colors suggested that they may have come from a mockingbird. On its own, each multi-colored feather looked like the others. But if I put them side by side, I could see the variations in color. I could see which way the feathers curved. They had come from various parts of the bird’s body. This led me to believe that the hawk was involved, and that the story of these feathers was one of a small yet everyday tragedy. 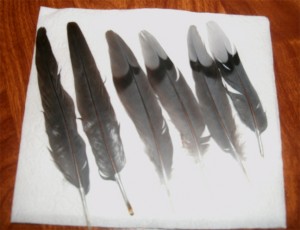 The first feather, the smallest and brightest, is already my favorite. Whenever I pick it up. I imagine that I feel a life force pulsing from the shaft. This is impossible, I know. The bottom of the quill is tinged with red, too. With remnants of blood? This makes it even
more real, and gives me a connection to the animals, to both prey and predator. I could stare at these feathers for hours in wonder, imagining. Had they belonged to a mockingbird? A nuthatch? A robin? How could I ever know for sure?

It seems like a decent enough exchange: trash for treasure. Even a simple act like taking out the garbage can offer us new discoveries, if we only pay attention. How else could I end up with a collection of six maybe-mockingbird feathers? And what will I find on my next trip to the curb?

4 responses to “Feathers of a Bird”