Unlikely Eden – The Dispersal of Seeds

“Though I do not believe that a plant will spring up where no seed has been, I have great faith in a seed. Convince me that you have a seed there, and I am prepared to expect wonders.” – Henry Thoreau

The other day, I pulled my kayak gear from storage. There it was all spread across the driveway, seed of water-wandering for the coming season. Then the obvious arrived in mind: scattered liberally too were hundreds of cones from our local pines – so many that the ground was dark with them in places, all in search of the next spot for a pine. There’s always always always faith in what’s to come. And then I knew where my first paddle would be; I’d aim for an islet and that has its own seed-story. 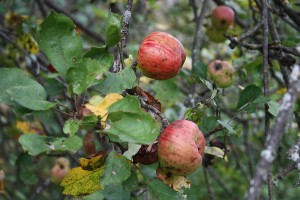 As fall comes on, I’ve seen them bobbing in the bay like punctuation marks in search of a sentence. Apples, like much that lives along the shore, go overboard sometimes, and where they go once in the water is a matter of wind and current. And, perhaps, some third force – a hand, for instance, or a swimming deer.

Whatever the manner of movement, some years ago, perhaps around the time I was born, an apple fetched up on an islet between the two Goose Islands (Upper and Lower) in Casco’s Middle Bay. How do I know this history? Its long story of growth lies there still.

I first noticed this tree on the north end of the islet during late August while water-ambling in my kayak. From a distance it looked decidedly out of place amid the clutch of sumac and wild roses that ran along the thirty feet of ridge a few feet above the tideline. That’s an apple tree, I thought from a distance, and as I drew near, I saw that it was. The trunk was a foot thick, and, on its inland side, away from the salt-burned foliage, I saw pale apples the size of a baby’s fist.

That islet’s a most unlikely Eden, I thought, and then I went ashore. It took about a minute to circumstroll the islet, and as I edged up under the apple, I could just reach some its spawn. I picked one, turned to an unmarred side, checked for worm-holes and took a bite; the sour saltiness pulled my whole face askew – this apple was tough in so many ways. But I took another bite, worked it hard with my jaws and finally swallowed. So began a ritual that ended only last year – as an act of taking on summer to ready for winter, I always paddled out for a few salt-apples. And out there, miles from any other apple tree, I wondered at this tree’s story and survival only feet from the sea and exposed to the wind that drives waves up the bay.

Last spring’s first paddle took me out to the islet, and even from a half-mile away, I noticed the change – no tree jutted from the north end like a defiant fist. Drawing closer I read the story of the tree’s fall – its trunk lay prone toward the water, and its root-system, which had grown sideways up into the islet’s meager bank was pulled away. Some winter gale or accumulation of ice and snow had toppled the tree, or waves had pulled finally the support from around it.

So no more salty apples, but the remnant trunk is still a story of amazement at how seeds – of life or thought – meander to and root in the most unlikely Edens.

And, when you come to think of it, isn’t every Eden unlikely?

Added practical note: pine cones make wonderful fire-starters; with their rich load of pitch, they take flame from a single match and burn fast and hot. Or, if your fire is flagging, a few cones on its coals will flare under added wood. I gathered a large bag full in a few minutes (and, as a bonus, my fingers smelled of pitch for the rest of the day). 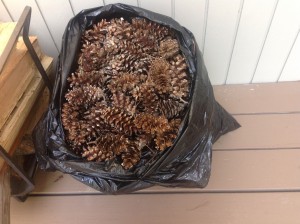 Here they are – looking a bit like an odd hobbit – a bagful of pine cones.

Comments Off on Unlikely Eden – The Dispersal of Seeds