Posted on March 29, 2015 by Sandy Stott | Comments Off on Two Suburban Hawks, Sans (and Avec) Squirrel

We had run out of postage stamps, and I had an important bill to mail. So I shuffled into my shoes and coat and set out walking to the grocery store a block away to buy some. As I passed our backyard, I looked toward the top of the pine tree to check on the leafy squirrel condominium. But right in my line of sight was something else: a large hawk, sitting in the oak tree next to the white pine. I stopped, said a soft “Hello, how are you?” when it looked at me, and turned to walk back and get my camera. A minute later, the visitor was still there, and I snapped a few images.

It was only then, with my concentration focused on the scene, that I realized warning signs I should have been aware of earlier. A single crow-sentry, perched at the top of the same oak, repeated a few urgent notes to anyone who would hear. All of the little birds in the neighborhood murmured lowly from bushy hiding places. And naturally, none of the normal squirrel activity was taking place in our yard. No fuzzy gray critters were digging, retrieving or eating acorns. Our resident squirrels were tucked away in their nest or into other safe havens. 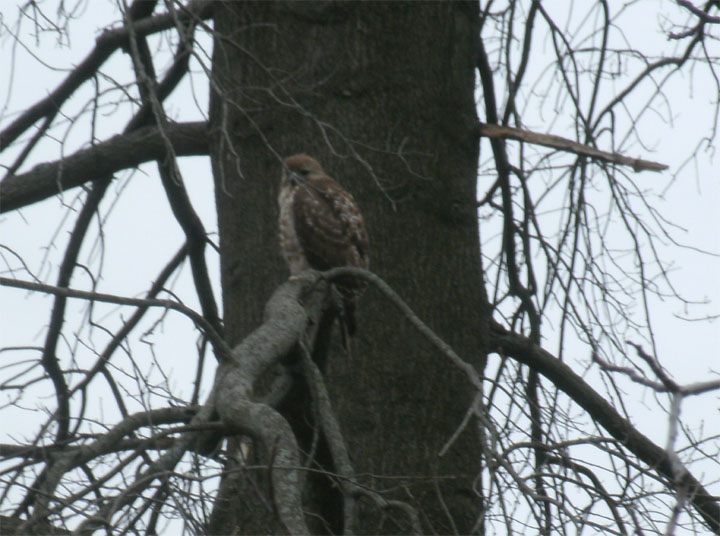 Reluctantly, I continued on with my immediate mission. When I returned, I saw that the hawk had turned around to face the pine. I worried about the squirrels and about having a front-row seat to the natural collision of prey and predator. I like both squirrels and hawks. And even though I understand the need for both of their roles within the cycle of nature, I’m a wimp when it comes to witnessing the act in person.

I paused. I considered spending the rest of the morning working in my writing porch, which I hadn’t used since November. I probably could slip into it from the other side without disturbing the hawk, and I could turn on the space heater. I could get even better photos; I could be hawk-inspired for the rest of the day. And if it meant seeing something that I’d rather not see, at least I could write a firsthand narrative about whatever happened.

But it was not to be. The hawk lifted its shoulders, hopped off the branch, spread its wings, and soared away across the neighboring properties. (What a wingspan!) Some of those yards have active bird feeders in them. If the warning cries from the crow hadn’t reached that far – well, I guess this couldn’t be one of my concerns. I turned and went back into the house.

I was happy enough to have watched one of my favorite animals for a few minutes on an early spring morning. I had gotten another glimpse into that other being’s world, and to the life that goes on around us, whether we pay attention to it or not. And it was only because I had used our last postage stamp three days earlier, that was I given the chance to pop onto this scene. Thank you, Universe. And continued Good Hunting to you, Mr./Ms. Hawk. I hope you found a decent brunch somewhere.

My related hawk-watching story also takes place in a pine tree, and it too involves squirrels. On this particular spring day, I was on my way home, passing by a large white pine, when the squalling of a crow drew my eyes up. The crow was atop the pine, but the action was taking place a third of the way down the tree: there, barely visible, were the tail feathers of a large bird, which was clearly at work deep inside some cavity in the tree.

Thirty seconds passed and then, amid backing up and flapping, a hawk worked its way out of the cavity; in its talons was a baby squirrel. Whoa, I thought; that’s deep hunting (I had never seen a hawk hunt inside a tree). Amid crow cries and a scolding from a parent squirrel perched nearby, the hawk flapped twice and rose up and away. I’d witnessed part of the long cycle of relationship between hawks and squirrels, and I turned to walk on.

A friend nudged me, and said, “Look at that!” The parent squirrel had just emerged from the tree cavity, and in her mouth was another baby squirrel. What to do? her posture seemed to ask. But clearly she already knew. Head first down the tree she came, carrying what must have been a third to half her body weight. Then, across the parking lot, up an ash tree and out along a limb parallel to the ground twenty feet above us. Where’s she headed? we wondered.

At the elbow of the branch, where its remainder pointed up to the sky (and light), the mother squirrel disappeared. We relocated for better view, and then we could see a small hole in that woody elbow. Just then the mother squirrel reappeared empty mouthed, reversed her route and brought back baby squirrel number 2 from the pine cavity.

Same route run again. And the same for baby squirrels 3 and 4. No looking over her shoulder for a reappearing hawk, though clearly that was expected; no flagging of effort over her two hundred-foot journeys. And no attention paid to the small crowd of humans who had by now gathered to watch this rescue. Mother squirrel knew her priorities; she knew her hawks.

And, as Henry Thoreau knew so well, we often arrive as Nature’s witnesses when we pay attention, even during our shortest walks.