“Why not keep pace with the day…and the migration of birds? … The wild goose is more a cosmopolite than we; he breaks his fast in Canada, takes a luncheon in the Susquehanna, and plumes himself for the night in a Louisiana bayou.” ~ Thoreau’s journal, March 21, 1840

The Austrian Alps may be alive with the sound of music., but today in the farmlands and suburbia of southeastern Pennsylvania, the skies are alive with the calls of waterfowl. It’s “Goose music,” as Midwestern nature writer Aldo Leopold once called it. The Canada geese and the white tundra swans fly (and chatter) over us in Vs, in straight lines, and in disorganized and dynamic swiggles. They use the mile-wide gray ribbon of the Susquehanna River as their North Star. Our leftover cornfields and fine-trimmed farm ponds make good touchdowns and rest stops. Then, after a time, the birds take off again, in a whirl of whipping wings and whoops and hollers. 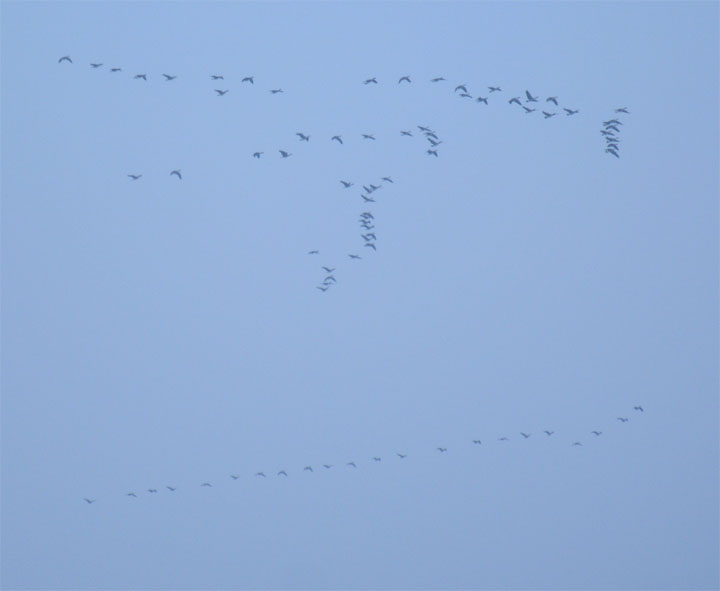 The geese could probably stop anywhere. The tundra swans, however, are heading for the shorelines of Hudson Bay and Canada’s Nunavut territory. They’ve still got a long way to go before reaching their summer home. 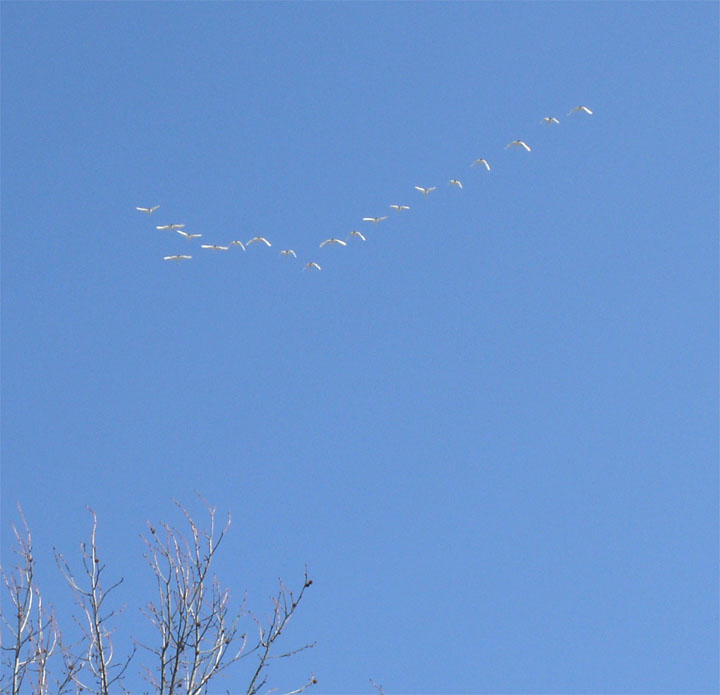 Our friend Henry Thoreau used exaggeration for effect when he claimed that a Canada goose could cross the north-to-south width of our country in just one day. (And why he had the bird flying south in a journal entry written in March is a mystery.) One online source I found said that Canada geese travel north at about the same rate as the season advances. 34° Fahrenheit is the key temperature they use to move. No wonder we’ve seen and heard many migrants recently. Our recent daytime temperatures have averaged around this mark or higher.

Whenever I hear the distant honks and whoops, I have to go outside and look up. I need to catch sight of the birds, hurrying on their way to wherever. I want to follow them someday, I think. I could just get in the car and keep an eye out and drive as they fly. The birds tend to take overland routes and to go “cross lots,” as Henry used to say, where no roads lead. Following them could be tough. And if they stopped to rest with other flocks, how would I recognize which batch was “mine” upon take off? I would have that pesky they-all-look-alike-to-me problem, at least at first. Darn.

For now, I guess I’ll have to watch the geese and travel with them vicariously. I’ll imagine the sights they’ll see along their journeys, both from the air and then on land. I’ll admire their instinct and tenacity.

When I return to the writings of Aldo Leopold, I find that he was also fascinated by seeing these guys in spring. And he imagined their later lives, too.

“One swallow does not make a summer, but one skein of geese, cleaving the murk of a March thaw, is the spring. … By this international commerce of geese, the waste corn of Illinois is carried through the clouds of the Arctic tundras, there to combine with the waste sunlight of a nightless June to grow goslings for all the lands between. And in this annual barter of food for flight, and winter warmth for summer solitude, the whole continent receives as net profit a wild poem dropped from the murky skies upon the muds of March.” ~ Aldo Leopold, “March,” in “A Sand County Almanac”

2 responses to “Cosmopolite Geese (plus swans)”