As noted in a prior posting, we’ve been on the road lately, and the miles of wheeling south have made me think about, well, roads. Always, as we drive, I am aware of bisecting some landscape, of riding right through it at a speed that outpaces perception. Some of that thinking crystallized this morning when I read a posting – What Have Roads Wrought – on the New Yorker’s website.

As often happens when I read studies of ecological observation and effect, I thought of Henry Thoreau and the roads – both highway and railway – that passed by and, at times, animated his stay at Walden Pond. The pond’s east end is skirted by Route 126, and, famously, its west end has 1844’s Fitchburg Line as a tangent.

In the “Sounds” chapter, one of my favorite sections of Walden, Thoreau considers the complicated realities and possibilities of the train: it is both fearsome and expansive: “We have constructed a fate, an Atropos, that never turns aside (Let that be the name of your engine)…I am refreshed and expanded when the freight train rattles by me…I feel more like a citizen of the world [at the sight of the passing freight from around that world.]” The railroad is tireless and relentless and not subject to Nature, but it carries with it a broader sense of the world.

So too these other roads, the highways on which we drive.

Michelle Nijhuis’s New Yorker post – http://www.newyorker.com/tech/elements/roads-habitat-fragmentation?intcid=mod-latest – summarizes decades of some of the Manaus [Brazil] project’s research on habitat fragmentation brought on by our development of roads on which we drive our own “iron horses.” Chief among its findings are precipitous declines in species – flora and fauna – that arrive with roads; that seems especially true along the edges that line our roads. And, of course, the more roads we build the more edges we create.

What caught my eye (and returned me to Henry Thoreau) was the following statement from professor Nick Haddad of North Carolina State University:

The study also demonstrates, using a high-resolution map of global tree cover, that more than seventy per cent of the world’s forest now lies within one kilometer of such a [roadside] edge. “There are really only two big patches of intact forest left on Earth—the Amazon and the Congo—and they shine out like eyes from the center of the map,” Haddad said.

Two thoughts floated up from memory. The first took me back to Estabrook Woods, in my mind Thoreau’s north pole of Concord. In the early 1960s Concord businessman Tom Flint was flying back into Boston and doing what we all do when given a window seat – he was watching the strings and blobs of lights that show where we live. He noticed a large dark patch. “Where’s that undeveloped forest/land?” he wondered to himself. Flint discovered that it was Estabrook Woods, which turned out to be the largest contiguous patch of undeveloped land within the Rte 495 belt. Flint’s discovery launched a 30-year effort to keep Estabrook Woods intact, which, despite a Middlesex School intrusion for athletic fields, it mostly is today.

In Estabrook’s deepness, back from the roads that ring it, a walker can find goshawks, pileated woodpeckers, and Thoreau’s favorite bird, the wood thrush, all species that require uninterrupted forest. 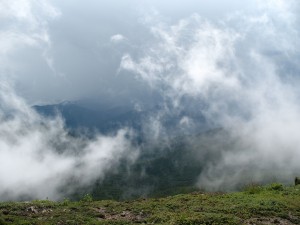 Far (or not so) from the Madding Road

The other thought is a common “game” for wilderness walkers – how far from a road are we? Or, put differently, what’s the most remote spot we can walk to (remote being defined as farthest from a road). It is – surprisingly or unsurprisingly – hard to get many miles away. In the lower 48 states, for example, the point of greatest remove from a road was tracked by Backpacker writer Mark Jenkins in 2008: “Astonishingly, in the entire continental U.S., coast to coast, Mexico to Canada, there is only one place left where you can get more than 20 miles from a road: in the greater Yellowstone region.” (See more at: http://www.backpacker.com/trips/wyoming/yellowstone-national-park/destination-nowhere/2/#bp=0/img1)

In “Sounds” the train goes by, and throughout the night Thoreau rides his most expansive vehicle, that of his imagination. The chapter ends decisively with an image of unfragmented Nature: “Instead of no path to the front yard gate in the Great Snow, – no gate,-no front yard,- and no path to the civilized world.” 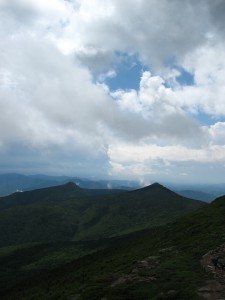 Back on the asphalt paths, I’m thinking again of Nijhuis’s post and this note: “Roads scare the hell out of ecologists,” William Laurance, a professor at James Cook University, in Australia, said. “You can’t be in my line of business and not be struck by their transformative power.”