The other day, after reaching Thoreau’s closing image in Walden – “The sun is but a morning star.” – we went to the pond. We left early, driving the two miles over quiet roads and arriving (with permission) at the closed park. One lone angler was on the east shore; we headed for the house site. Outside the book after six weeks in its room, we were headed back to where it began.

At the house site, we crowded into the little post-and-chain rectangle and read a few passages about the March morning in 1845 when Henry Thoreau began building his house. We looked up at the “tall arrowy pines” and in imagination felled a few; we “left the bark on.” Then, we admired the sprawling cairn nearby. Now, it was time for the water and the sun, and each of us went to a sitting place along the banks of the northwest shore. Everything was afire with sunlight, even the undersides of branches had caught the light of the “second sun,” the one that flashes up off the pond. Already the night cold was gone; the new day was afoot. The sun had brought it. 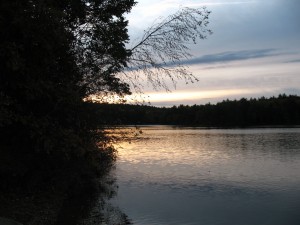 Morning at the pond

While my students entered their various solar reveries, I watched them from across Thoreau’s cove, and it wasn’t long before I entered a reverie of my own, this one about the power possible from the same sun that lights Walden. Are we not, clever species that we are, able enough to use that power directly instead of continuing with our habit of unearthing its stored remnants and burning them, thereby setting off a cascade of unnecessary change in our atmosphere?

That, in turn, made me think of Thoreau Farm’s solar challenge – to which we have given happily. The challenge seems especially apt, as I emerge from another reading of Walden, where it has been a gift to be brought over time again to this morning star, and then left there on the shores of a new day to choose my direction.

And, now that we have “fallen back” into Standard Time, it is a gift to awaken each morning to the low-angled, November sun as it streams through the leafless trees. Even at this northern latitude and in our shortened days, the sun has power.

That morning, we left the pond warmed; perhaps some of us were newly awake. The sun had worked its daily magic.

I hope you’ll consider helping us bring some of this magic to Thoreau Farm.

Comments Off on Solarity