Birds Who Winter With Us

Posted on November 18, 2013 by Sandy Stott | Comments Off on Birds Who Winter With Us

Our neighborhood sounds almost like Spring these days. Every morning before 6:30 a.m., a bird sings loudly and seemingly joyfully for about five minutes from a tree in our front yard. I don’t know what kind of bird it is, but its song is familiar. The same fellow – or one of its family members – made its winter home in the arborvitae bushes beside our carport last year. Back then it shared its melodies off and on, sometimes even during cold or snowy days. It sang quite a bit when everything turned green. Then it left to spend summer and fall somewhere else. Now the bird is back, ready to hunker down in our bushes again, preparing to escape the weather to come.

It’s not the only one. Nearly every yew and juniper on our block is teeming with little birds. You can hear them chattering to each other from the branches within. They’ll go suddenly silent if someone walks past, especially if the person is being led by a dog or two. But after a pause of only a few seconds, the chirps of conversation will start up again. I guess they’re all vying for position. If you’re a bird and you need a comfortable shelter against wind and precipitation, you’d want to find the right spot to sit in. Can you imagine holding onto a branch during a snowstorm? 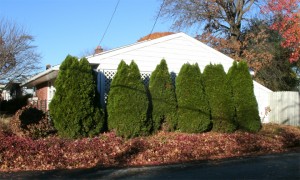 Our house and carport protect these six arborvitaes from the western winds, making them perfect winter homes for birds.

I’m not a total dolt when it comes to identifying birds. But our morning singer and its cohorts hide too much or move too fast for me to train binoculars on them. I haven’t taken the time to figure out who they are. For now, they fall into the catch-all category of LBBs – Little Brown Birds. I once lamented to an avid birdwatcher that I wished that all of Nature’s creatures would wear name tags. “They do,” he replied. “You just can’t read them.”

This is not the first time I’ve been lucky enough to share close quarters with a wintering bird. Back in the early 1990s, a male house finch chose the uncovered light fixture on our back porch for its winter home. Only a single bulb was left in the old two-bulb fixture; and a metal T-shaped bar dropped down a few inches from its center. There was just enough room for a bird to sit on one of the crossbars. He perched there every evening. By the time I got up in the morning, he had already left for the day, presumably to find food. Since we rarely used this entrance, we humans were only minimally inconvenienced. I just put a piece of cardboard in the middle of the porch floor to catch the spots of whitewash that had alerted us to his presence in the first place. We never turned on the light. And every evening, we would look out the top window of the back door, see the dark outline of his body, and say, “Goodnight, Mr. Finch.”

Then one day in March, I heard one of the most amazing bird songs I’d ever heard in my life. I looked out the kitchen window. On the clothesline sat Mr. Finch, fully engulfed in the promise of Spring. He raised his head to the sky and sang and sang and sang. It seemed as if his little crimson chest could hardly hold all of the sounds that needed to come out. He imprinted his house finch melody into my brain, and I felt honored that he had shared it with me. But I also knew that the song signaled his departure. (I interpreted it as a possible thank-you, too.) Off he went. I said goodbye and wished him well. The rest of the year, I caught only glimpses of him with his female partner as they flew through our back yard, foraging. They had found a better place to build a nest.

I skimmed through the index of Thoreau’s journals to see if I could find an instance when he witnessed the bird-in-the-bush or an over-wintering phenomenon. The closest entry I came upon was from December 14, 1855: “How snug and warm a hemlock looks in the winter!” It was accompanied by his own sketch of the tree. Maybe he too was wondering what it would be like to be a bird and to hold onto an evergreen branch during a snowstorm.