On Thursday, November 14th, the Thoreau Farm will be honored to welcome author Ken Ilgunas for a reading and signing of his book, “Walden on Wheels: On the Open Road from Debt to Freedom,” beginning at 6:30 p.m. His story is truly inspirational. And it involves living in his van in order to save money and to simplify his life.

Ken earned a liberal arts degree from The University at Buffalo in 2006, but he wasn’t sure what he wanted to do from that point forward. In 2007, he was working as a maintenance worker in Alaska, and he read a lot during his down time. One of the books he picked up then was “Walden” by Henry David Thoreau. “I found myself nodding to each paragraph,” he wrote, “jotting notes in the margins, underlining whole pages. Thoreau gave me the words to describe what I’d felt for so long. … Thoreau made me feel like I’d been a sane man wrongly assigned to live in a madhouse. He became my guide, whispering wisdom to me through the walls of my cell, confiding to me that he’s ‘convinced, both by faith and experience, that to maintain one’s self on this earth is not a hardship but a pastime, if we will live simply and wisely.’” Thoreau and “Walden” gave Ken the push he needed: one that led in a deliberate direction.

Ken vowed to somehow make it all work: to get a graduate degree, to do it without getting into debt, to live simply, and to move toward doing what he loved to do – whatever that might be. When he moved to North Carolina to attend graduate school at Duke University, Ken decided to become a “vandweller” instead of renting a costly dorm room or apartment. Yes, he lived in his van, in a space not much different from the small house that Thoreau built at Walden Pond. How did Ken accomplish this in the 21st century, and on a big college campus? Well, you’ll have to read the book to find out. Or come to Thoreau Farm to hear his story in person. 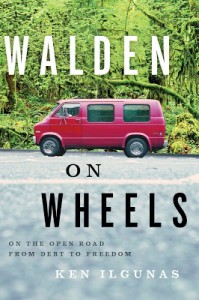 In the ”Economy” chapter of “Walden,” Thoreau wrote: “I would not have any one adopt my mode of living on any account … I desire that there may be as many different persons in the world as possible; but I would have each one be very careful to find out and pursue his own way, and not his father’s or his mother’s or his neighbor’s instead. The youth may build or plant or sail, only let him not be hindered from doing that which he tells me he would like to do.”

Ken has put Henry David Thoreau’s words and philosophies into actions, in a way that is uniquely his own. He’s an inspiration to writers and to travelers alike; and he seems bent on continuing to be so. If you keep up with him online, you know that he’s already moved on and has already led more adventures. Even as he wrote his first book and pointed it toward publication, he hiked 1,700 miles along the Keystone XL pipeline, from Alberta to Texas. Then he went on an ancestral tour of discovery to Scotland. There’s no stopping Ken Ilgunas. I can’t wait to read what comes next.

In the stairway lobby of the Thoreau Farm, a bulletin board hangs on the wall. Visitors are invited to write down on cards how they have chosen to live deliberately, so that they can share their testimonies with others. Well, Ken’s book and his life are prime examples of how one person can choose to live quite deliberately. And they’re both too big to fit on a single index card. Come hear a sample on Thursday evening.

Comments Off on Walden on Wheels