Posted on November 4, 2013 by Sandy Stott | Comments Off on A Wider Universe

Once the leaves disappear at this time of year, a specific Thoreau quote creeps my mind: “The universe is wider than our views of it.”

You can find this sentence in the first paragraph of the concluding chapter of “Walden.” It starts a series of ruminations debating the act of staying in one place versus the choice to travel. A journey could lead you around the world, where you could even get a chance “to count the cats in Zanzibar.”

Three paragraphs after referring to the “universe,” Henry writes: “I left the woods for as good a reason as I went there.” That’s when the reader says to herself, “Naturally, he needed to leave. He had other things to see and do.” This is the original context of the “universe” quote. Thoreau is leading up to description of his departure from the Walden house. But I feel comfortable applying the saying to other situations.

Three years ago, I paraphrased it in a eulogy for fellow Thoreauvian Edmund Schofield. Ed had a variety of interests and a multitude of friends who were attached to each one of those endeavors. Most of the people had never met before. Most of their lines had never intersected. Ed had been their sole common thread. During the memorial service, we were surprised and gratified – even overcome with joy – to hear fifteen individuals share their memories and their own personal interactions with our mutual friend. They were all different. Ed’s universe had truly been wider than our views of it.

Each fall, the trees begin to bare themselves. Day by day, they unveil views that we either didn’t have before, or ones that we’ve forgotten. All summer long we had bold bright greenery in front of us. Now that it is receding, we can see through the line of shrubbery. We can see the outlines of houses on the other side. We can see fences and walls again. Nature had softened the scene for a few months. These days it drops away to uncover the background, the foundation that was always present.

Suddenly animal homes are also revealed. A robin’s nest is wedged among forked branches of the crab apple in the front yard. The birds are gone, leaving a perfectly smooth cup where the eggs were laid and the fledglings grew. A messy nest for squirrels soars from the top of a red oak. Its residents are still there, warm and dry, and perhaps also confident that they’ve stored enough food to survive the winter. Paper wasps have evidently been living in a maple tree at the edge of the North Bridge in Concord. How many hundreds of visitors walked beneath the nest this summer, unaware? How many redcoats and colonials took aim against one another here (as a matter of historical interpretation, of course) as the resident wasps flew above them to pollinate local gardens and to eat other insects? 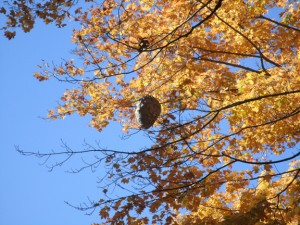 Wasp nest in a maple near the North Bridge

This “universe” quote is a metaphor for Life, isn’t it? It’s all about perspective. We have only our own impressions to guide us. We operate solely upon the bits of information that we have available. Rarely do these pieces form an entire story. We have to have patience or perseverance to learn the rest. That’s just the way it is.

Gosh, Henry. It turns out that we don’t have to go anywhere to see something different, or to get the wider view of the universe. We can stand right here and let the seasons change around us. The cats of Zanzibar can remain uncounted. But you knew this all along.