“How many a man has dated a new era in his life from the reading of a book. The book exists for us perchance which will explain our miracles and reveal new ones.” ~ Henry Thoreau, “Reading,” Walden

On Friday morning, I zipped over to an adjacent town just before 9 a.m. I wanted to hit a public library book sale in its first minutes, before I had to go to work.

I don’t “need” more books, mind you. My bedside stack of to-be-reads stands more than two feet tall. I buy one or two more from online sources at least once a month. And I work part-time at a used bookstore, for heavens sakes. Still, I had to go to this sale to make sure that I wasn’t missing out on some other crucial titles. I knew I had only 15 or 20 minutes to waste – uh, I mean spend — there.

I pulled into the parking lot just as the doors opened. A few dozen early birds hurried in ahead of me. As I walked into the large room, I saw that the volunteers had marked the tables well. The LITERATURE and NONFICTION signs caught my eye first, and I decided to save these sections for last. I started instead with FICTION and MYSTERY. I began the usual cock-headed zombie walk of the experienced book sale customer.

This was an average-sized sale, with many more hardbacks than paperbacks. I soon saw familiar books. Ones I managed and distributed as a long-time librarian. Ones I once owned and have since given up. Others – both read and unread — that still sit on my shelves at home. It’s like Old Home Week when I go to one of these sales. I had to smile at some of the titles I saw, remembering. I couldn’t dawdle, though. And I kept bumping into people going the other way.

I used to devour mysteries like potato chips. But I’m not always in the mood for them. More often I move toward books about nature, writing, nature writing, and personal motivation. I made short work of MYSTERY here.

I picked up James Michener’s “The Novel” and carried it along as I kept looking. I soon realized that I didn’t want to own this book; and if I wanted to read a copy, I could always borrow it. Had I read it before? I thought I had. I may have even owned a paperback copy of it, once. After a few minutes, I returned Mr. Michener to an open slot on the FICTION table.

I headed toward LITERATURE. This was the smallest section of the sale, and the pickings here were slim. Nearly every book was recognizable as a classic: American, English, even some from old Greek storytellers, like Homer. Not many selections appealed to me. I rounded the corner to scrutinize the other side of the table. Well, what do you know? Here was a copy of Walden. Hello, old friend. Hello, Henry. I may have even gasped when the one-word title caught my eye.

It was the Great Illustrated Classics edition, first printed in 1946. I’ve seen it on many library shelves over the years. Now here this one sat, right next to Catcher in the Rye, The Heart is a Lonely Hunter, The Great Gatsby, and biographies of Shakespeare and Mark Twain.

It wasn’t a library discard. It was fresh and unscathed. The hinges held perfectly, almost as if they were brand new. I opened it up and looked for a past owner’s name. I didn’t see one. I did see the price mark of four dollars. I put it back. I stared at it for at least a minute. Should I, or shouldn’t I? 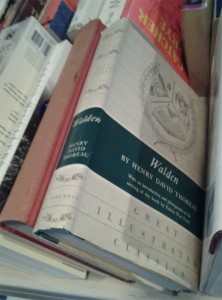 I didn’t “need” this “Walden.” I already have a few key editions that I like. And of course, this wasn’t my favorite version of all time. That’s the 1970s paperback that I read in my senior year of high school (See my blog post, “MY Walden,” http://thoreaufarm.org/2013/08/my-walden/, for this story.) After a minute of contemplation, I sighed and turned away, empty handed.

Running out of time, I speed-sauntered around the rest of NONFICTION and BIOGRAPHY. I glanced quickly through SELF-HELP. In the end, I took three books to the checkout clerks: A River Runs Through It, by Norman Maclean (which I read in the 1980s but never owned); In Defense of Food, by Michael Pollan (which I hadn’t gotten to yet, though I’ve read a few of Pollan’s other books); and an original hardcover of Blink, by Malcolm Gladwell. I’ve read all of Gladwell’s books by borrowing them from libraries. I knew I had since bought a used paperback of one of them, and I couldn’t remember which one it was. I decided to take the risk on this Blink. It was in excellent condition.

And what of that “Walden”? I decided to leave it behind. I hoped it would find another home with another devoted reader. Perhaps it was fated to make a difference in someone else’s life. How could I stand in its way?

[Many thanks to Jeannette Weitzel, who served as photographer, by request and at the spur of the moment. And FYI: I now own two copies of Blink.]