Could Henry Have Accepted This?

Posted on June 2, 2020 by Margaret Carroll-Bergman | Comments Off on Could Henry Have Accepted This?

By Ken Lizotte, President, Board of Trustees 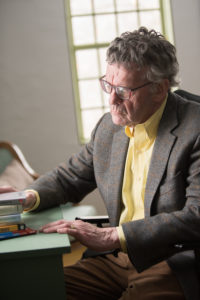 I keep wondering these days what would Henry do. What would Henry think, say and do about the coronavirus crisis? Or about how the Federal government is helping us out … or making things worse? Or how people are suffering and sacrificing to get thru each day? Has it only been a few weeks since this entire horror show began? What would Henry be doing by now?

Certainly social distancing would have been just fine with him. What was it he once said about having people over to his Walden cabin? “I had three chairs in my house; one for solitude, two for friendship, three for society.” With no lectures to attend, no concerts, no family gatherings, would the only recreation available sauntering thru Walden Woods, be enough? Well, maybe.

But the struggling, the governmental incompetence, the wastes of our time and our lives? Could Henry have accepted this? As a “civil disobedient” he had refused to pay what he considered an unjust tax and willingly spent a night in Concord’s jail as a consequence. He also penned a passionate defense of the rebel John Brown despite the violence at Harper’s Ferry. He assisted too in the very illegal Underground Railroad. That’s what he did in HIS time! What are we doing in ours?

It’s a hard one to answer with certainty by any one of us. But I am guessing he would have observed the shelter-in-place guidelines and used the time to play his flute, written a sequel to Walden, shouted a lecture-rant from the top of Cemetery Hill, and refused to pay all taxes until enough test kits were made available, coupled with a sensible plan for contact tracing and whatever else might likely end this madness once and for all. That’s what I think Henry would do.

What about you? Do you agree? Have other ideas? What do YOU think Henry would think, say and do? If you’d like to try, I invite and challenge you to share your thoughts with our Thoreau Farm community. Just email me a brief reaction or two, which I will compile in an upcoming blog post report on all responses.

Maybe together we will develop concrete actions that help resolve things. Maybe Henry’s very spirit will reach out and inspire us. Maybe we can end this nightmare.

Send your thoughts to info@thoreaufarm.org .

This entry was posted in Henry David Thoreau, The Roost. Bookmark the permalink.