Posted on June 17, 2020 by Margaret Carroll-Bergman | Comments Off on Rivery Days

“I was impressed as it were by the intelligence of the brook, which for ages in the wildest regions before science is born, knows so well the level of the ground and through whatever woods or other obstacles finds its way. Who shall distinguish between the law by which the brook finds its river [sea], the instinct [by which] a bird performs its migrations, the knowledge by which man steers his ship around the globe?” — H.D. Thoreau, Journal, May 17, 1854

Though I am later out the door than Henry Thoreau was in the late spring of 1854, (often, he began at 6 a.m., or earlier, summoned by the early light, and the long, possible days), we share often a common destination. I mean “common” in a larger sense, in that we are also separated by 140 miles as well as by the span of years. We live in different places and times.

What joins us this spring-going-on-summer?

Thoreau and I go often in search of water, which in its streaming is on its own search. As I’ve read through spring 1854’s Journal outpouring of local excursion and observation, I’ve lost count of the number of times, Thoreau wrote, “Up Assabet,” or “To Fairhaven,” or “To the river…” His boat barely slept, I think. And from those waters, he kept track of spring’s profusion of leafings and flowerings out. So much to see; so much to be, he might have written in summary. 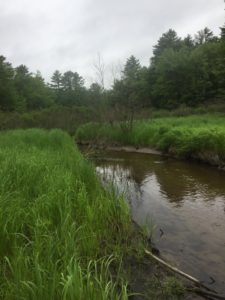 My own spring of ’20 has also been water-infused and -enthused. Here in Brunswick, Maine, we have a brook that runs through us, much as the Assabet, Sudbury and Concord run through Thoreau’s town. But our brook, aptly named Mere Brook, has nowhere near the name or volume of Concord’s waters. It is just under five miles long before it becomes sea, and for much of its length, I can switch banks in a single bound (or once could have). But once gathered into initial pooling, Mere Brook knows where it must go. And it works impressively through our town to do so.

Mere Brook also has a lot going on over its few miles. So much so that it’s earned an unwanted descriptor from our state; MB is “urban-impaired.” Which is no better than it sounds. In short, in its shortness, our brook bears enough toxins and sediment and bacteria to make it unwelcome when it unburdens itself in Harpswell Cove, when it returns to its Mare. A number of us have taken on the cause of clearing Mere Brook of its “impaired” designation.

The brook’s burden has a number of sources — streets, houses, storm drains, backyards, piles of discard — in short, us and our various uses of the world. It also has one large-handed contributor: Mere Brook runs its intermediate miles through an old naval air base going-on industrial park. There, its east branch endures a 3/4-mile passage through a culvert beneath two runways, the imposition of a storm water and spill containment system on a tributary stream, and a legacy of dumped pollutants in groundwater named the Eastern Plume. No fancy feather that.

Still, like all its watery brethren, Mere Brook bears on, its waters surprisingly clear, it manilla sands firm in the center, its gullies and forested reaches passage for both waters and wild critters. It is in many places beautiful and expressive. And, like Thoreau’s rivers, Mere Brook occasions vision and visions.

I was, just a month ago, especially taken with Thoreau’s short description of “brook intelligence,” which pointedly he compared with our intelligence that enables us to rove the world. In his tri-part yoking of brook, bird and human, he unseats the usual assumption of our superiority as derived from our consciousness. We see ourselves as separate, apart from the usual flow; Thoreau begs to differ. “Who shall distinguish between the law by which the brook finds its river [sea], the instinct [by which] a bird performs its migrations, the knowledge by which man steers his ship around the globe?” he asks.

It has, these past few days, been just so on Mere Brook. Over those days, I have followed the wonderfully-named John Field, a fluvial geo-morphologist, as he walks the brook and susses out how it moves and why in this direction or that. “What’s on its brook-mind?” he asked. Over the hours of brook-walking and brush-bashing, I have watched man and stream take each others’ measure. “See this mudded root system,” said John the other day. “It shows me how our brook ponded here for a number of years, dropping silt as it slowed in the pooled water. We need to find out what made Mere do this.”

And some yards downstream, we found our forming force, an old, overgrown beaver lodge, shaped like a giant yurt. Another intelligence. Fifty yards downstream, a crushed rock berm rose fifteen feet, with two culverts punched through it for stream passage. Naval imposition.

The beavers, on the other hand, must have thought they’d reached the afterlife — dam already built, wild pond-plain guarded, people kept out; all they had to do was plug two culverts, pretty simple work for such engineers. So, for some years, the beavers thrived. When, finally, the food ran out, they moved on; the grasses and bushes grew back.

Mere words? Perhaps. Tomorrow we go out again to walk another reach of the brook, to see what’s next as Mere Brook knows its way to the sea. We take with us a growing sense of Thoreau’s “brook intelligence.”

Sandy Stott, formerly of Concord, Massachusetts, lives in Brunswick, Maine. The Founding editor of The Roost, he writes for a variety of publications. His recent book, Critical Hours — Search and Rescue in the White Mountains, was published by University Press of New England in 2018. He may be reached at fsandystott@gmail.com.