An Imaginary Friend for Henry

Posted on June 1, 2020 by Margaret Carroll-Bergman | Comments Off on An Imaginary Friend for Henry

Perhaps these days have you talking to yourself, or, better yet, revisiting an old ability many of us developed in childhood — that of talking with imaginary friends. Surely they can be helpful making sense of a time that seems beyond our experience. 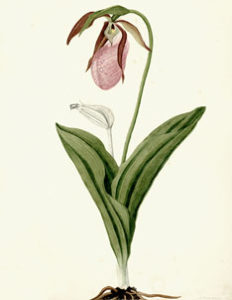 The other day, I did what I do daily: I went for a walk in the woods, and, after a long, stuttering start, I noticed that our coastal Maine woods have begun to say, “It’s the warm season; take a look at this.” Three favorite flowers colored this voice in my head — the trout lily, trillium and, finally, our orchid, the pink lady’s slipper. I love each, and they arrive in the overlapping sequence of their mention above.

In our Town Commons and on a set of local trails, each flower has been a welcome flag of the season. And each has nudged me to pick up a favorite small volume, “Wildflowers of Maine — The Botanical Art of Kate Furbish.”

Furbish (1834 – 1931) lived in Brunswick, Maine throughout her life and became one of the era’s better known botanists, and then, after her death as her illustrations gained a broader audience, a revered painter. She was, it turned out, that rare combination — scientist and artist (though by now we should be alert for the core of curiosity and close observation that brings a person alive in both disciplines; they seem deep and likely complements).

Perhaps Furbish’s dates and combined talents have brought you already to Henry Thoreau, and this friend I have imagined him meeting. Surely, the surface likenesses are strong. Both were unmarried, dedicated to family and ferocious in pursuit of learning. Both, as example, drew upon the work of famed Harvard botanist, Asa Gray, and Furbish often sent him samples of her findings.

But beneath these two surfaces lay eye, heart and habit that seem even more irresistibly alike. I know Thoreau’s life and work much better than Furbish’s, but when I look at her paintings and read her descriptions of looking for and finding her plant subjects, I begin to fashion a meeting between these two. Not that such a meeting happened, but it might have if chance had bumped them together when Henry was through Brunswick as a young man looking for work. Or, more likely, they might have “met” over Walden or his Journals, which ascended in reputation throughout much of Furbish’s lifetime. I’ve asked Furbish scholars if she read Walden or the Journals, however, and none can point to her having done so. Still…her interests and long life suggest possibility.

Which is all I need to begin constructing my imaginary meeting. Would they have gotten on? Hard to know. Each had a character that didn’t mold easily to others; each relished being out in the woods alone. Still…here are a few bits of story that say, maybe.

In a letter written in 1909, Furbish described her process of finding and collecting the Maine plants that were her subjects and life’s work. The self-portrait is, I think, irresistible:

I have wandered alone for the most part, on the highways and in the hedges, on foot, in hayracks, on country mail-stages (often in Aroostook, too, with a revolver on the seat), on improvised rafts (equipped with hammer, saw, nails, knife, rubber boots, vasculum,etc.), in row-boats, on logs, crawling on hands and knees on the surface of bogs, and backing out when I dared not walk, in order to procure a coveted treasure. Called ‘crazy,’ a ‘fool’ — and this is the way that my work has been done, the flowers being my only society, and the manuals the only literature for months together. Happy, happy hours!

After that catalogue of collecting behaviors and epithets received, readers expect some concluding note about suffering for one’s knowledge and/or art. They get instead, “Happy, happy hours.”

Such happy hours put me in mind of what I take to be one of Henry Thoreau’s signature statements in his early essay The Natural History of Massachusetts: “Surely,” he wrote:

joy is the condition of life. Think of the young fry that leap in the ponds, the myriads of insects ushered into being on a summer evening, the incessant note of the hyla with which the woods ring in the spring, the nonchalance of the butterfly carrying accident and change painted in a thousand hues upon its wings, or the brook minnow stoutly stemming the current, the lustre of whose scales worn bright by attrition is reflected upon the bank.

From those and other moments, I fashion a meeting between these two artist-scientists. Why not, I say to self, make it in 1856, when a 22-year-old Kate Furbish, ready with years of training as a painter and botanist reads Walden and begins to imagine her life. “I must meet this man who goes to and knows the woods so well,” she says to self, and on a visit to Boston, she sets out for Concord, accident and change painted upon her wings. And then…

So there they are, these two imaginary friends brought to life by long hours of looking closely at nature and then creating art that helps us see and be in our world.

I’m sure you have a friend for Henry too.

Sandy Stott, formerly of Concord, Massachusetts, is a Brunswick, Maine resident. He is the Roost’s founding editor, and he writes for a variety of publications. His recent book, Critical Hours — Search and Rescue in the White Mountains, was published by University Press of New England in April, 2018; Tantor Media released an audio version of the book in February, 2019. He may be reached at fsandystott@gmail.com .

This entry was posted in General, Henry David Thoreau, Nature, The Roost. Bookmark the permalink.