At the End of the World With Henry

Posted on May 27, 2020 by Margaret Carroll-Bergman | Comments Off on At the End of the World With Henry

Henry David Thoreau is not only one of the dozen dedicatees at the beginning of my book, At the End of the World: A True Story of Murder in the Arctic, but he also figures prominently in the book itself, although he never visited the Arctic. Indeed, he never made it farther north than the Saguenay River in Quebec. 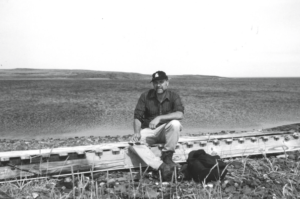 Consider the Belcher Islands, an archipelago in the turbulent waters of eastern Hudson Bay. So remote were these islands that the first white person to set foot on them did so only as recently as 1916. But they weren’t remote from the violence in the name of religion that’s currently common on our planet. In the mid-1930s, a missionary visited the Belchers and gave the local Inuit a simplified tutorial on the merits of Christianity.

Here are the consequences of that tutorial: some years later, during a winter when game was very scarce, one Inuk declared him Jesus, another declared him God, and anyone who didn’t believe in them was killed because that person was Satan. A plethora of Satans were killed in the Belchers.

So what do these killings have to do with Henry? I didn’t have the answer to that question myself when I first tried … and failed … to write a book about those killings. Years passed, but I still couldn’t seem to get a fix on the story. Then I happened to be in Tasiilaq, East Greenland, and I heard about a recent incident where a young woman was sitting on a rock by the sea and texting, unaware that a polar bear was approaching. At the last moment she saw the bear and screamed, whereupon the bear loped away. Presto! I realized I couldn’t write about the past without also writing about the present, and I got the necessary fix I needed to write the book.

In one of the book’s epigraphs, Henry says, “Let your life be a counter friction against the machine.” If he were alive today, he might replace“machine” with “screen.” For digital technology not only has become the silver SUV of global economy, increasingly so with the advent of COVID-19, but also something akin to a religious obsession, a pill-sugaring fantasy that, in making our lives seemingly easier, has removed us from the natural world. An example: In the book, I refer to a woman fixated on her iPhone and smashing into me on a sidewalk in Boston, then saying, “Sorry, but I was just trying to find out the weather.”

Twice in the book I describe being in the vicinity of Henry’s grave in Concord’s Sleepy Hollow Cemetery. The first time I was collecting Suillus mushrooms near the grave when a burly man in a pickup truck shouted at me,“Hey, my GPS crapped on me — can you tell me how to get to Route 2?” I gave the fellow directions without consulting a GPS, a device I don’t own, since it would remove me from the natural sights that document my whereabouts.

The second time I’d given a lecture at a New England college, after which one of the professors told me the college was jettisoning all of its books and going completely digital. No more palpable reading matter! I visited Henry’s grave and said, “I think we’re in trouble, Henry.” There was no response, but in a nearby tree a white-throated sparrow was singing, “Poor Sam Peabody, Peabody, Peabody,” perhaps the saddest of all bird songs.

At the End of the World mentions the elderly Concord woman who used to put flowers on Emerson’s grave, but who muttered as she passed Henry’s, “And none for you, you dirty little atheist.”

Regardless of his religion or lack thereof, what would Henry have done if he happened to be in the Belchers when the missionary arrived in the mid-1930s and left a Bible translated into Inuit syllabics? He gives some idea of what his response might have been in this sentence from Walden: “If I knew for certain that a man was coming to my house with the conscious design of doing me good, I should run for my life.”  Note that he says “run” rather than “saunter,” one of his favorite words.

But rather than run or even saunter for his life, Henry might have simply stayed put and addressed the Belcher Inuit with these words: “O my animist friends, do not forsake the natural world, for it’s the best of all possible worlds. Game may be scarce on occasion, but Nature doesn’t exist for the benefit of us humans. You might succumb from want of food, then perchance Arctic heather and purple saxifrage (not ’weeds’ and ‘brambles,’ as my New England-based Journal observes) may constitute your second growth…”

Lawrence Millman is an adventure travel writer and mycologist from Cambridge, Massachusetts.

This entry was posted in General, Henry David Thoreau, The Roost. Bookmark the permalink.