Laughter Amid The Storm

Posted on May 21, 2020 by Margaret Carroll-Bergman | Comments Off on Laughter Amid The Storm 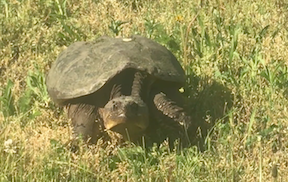 Perhaps you too could use a laugh … or at least a smile curling across your face where worry often sits. Here’s a recent moment that shifted me from smile to laughing aloud.

Many of us read Henry Thoreau for wisdom, solace, otherness, but not many go fishing with him for a laugh. Yes, I know that he is funny at times, and also that he thought himself so. A little redemption for being a sometimes-scold; and yes, I’ve smile-groaned at his affection for puns. But straight-out laughing? Not so often.

The other day, here in Maine, May began (finally) to utter itself. We’ve had a lot of cold rain and cold wind; our last snowflakes greeted me in the morning under a week ago. It’s been bundle up and bear-it weather, even as our green has come on. Throughout the month, I’ve been reading along, day by day, with Thoreau’s May of 1854 Journal. That May sums to 88 pages rife with observation. So much to see and note; so much change. Thoreau’s head seems to have been bursting with necessary notes. And, throughout it, he is always headed for the door, often to take his boat out onto the rivers and flooded meadows.

Thoreau’s May 16th features such a boat trip to Conantum in the afternoon, and, as ever, he is overflowing with observation. Leafing out is coming on so fast. On prior days he has been noting up a storm of openings, many of which are tagged as having happened, “say yesterday.” Enough so that I have begun to suspect that witnessing spring’s births really means arriving just after each event; it must always seem to have just happened. Then, on this day, he throws up his hands at trying to record in sequence, and in essence says, “It’s all happening; too much to record. Go out and be joyful.” Good advice. I went out the door.

Later, I returned to my reading. Here’s where image morphed to laughter. The 16th ends with a fine comic scene that involves a medium-sized snapping turtle. Thoreau spots commotion in the shallows of flooded Hubbard’s meadow. Of course, he floats over to see. There he finds the turtle on the bottom. Then, being himself, removing his coat and rolling up sleeves, he plunges his arm in repeatedly up to his shoulder, trying to catch the turtle, which in turn tries to hide under the boat. Finally he snags the turtle’s tail and hauls it aboard. The turtle is, as we all would be, a little put out. Henry reads as unperturbed, even as the turtle catches hold of his boot’s toe. He begins doing what Henry does — observing closely: carapace, moss on it, little leeches embedded. “It was wonderful how suddenly this sluggish creature would snap at anything.”

As he floats on through the late afternoon with the turtle now under the seat, Henry scratches the turtle’s back, a sort of absent affection that we visit on dogs. The turtle, however, is having none of it and pitches hissy (literally) fits, startling Henry repeatedly, even “though I was prepared for it. He suddenly went off like a percussion lock snapping the air.”

What made me laugh, beyond the descriptions of the two boated personalities, was the lack of resolution to the story. The little story ends there. Does the turtle get back into the water? When does Henry go home?

For me then this: on they sail, turtle and man, two tempered beings. Perfectly matched, it seems; still out there.

Sandy Stott is the Roost’s founding editor. He is a writer and educator, and the author of  Critical Hours — Search and Rescue in the White Mountains. He may be reached at fsandystott@gmail.com.

This entry was posted in Henry David Thoreau, Nature, The Roost. Bookmark the permalink.