From Germany, with love

Posted on July 27, 2017 by Margaret Carroll-Bergman | Comments Off on From Germany, with love

I’ve never put a rock on the rough pile of stones at Thoreau’s cabin site, until a 59-year-old man from Germany sent me one from a lake near his hometown and asked me to hike out and place it there for him. 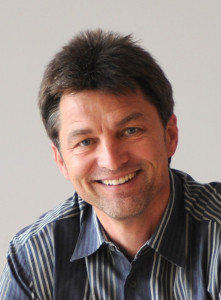 Werner Meyknecht is an IT Project Manager who lives in Recke, Germany. A Thoreau enthusiast, Meyknecht wanted to celebrate the Thoreau Bicentennial with fellow Thoreauvians in Concord, Massachusetts. He had hoped to come to Concord and be a part of the festivities on July 12, but money, time, and distance kept Meyknecht in Germany. He reached out to the Town of Concord for help. One of the town employees put Meyknecht in touch with Thoreau Farm.

This seemed fitting, since Thoreau Farm is the birthplace of Henry, and what better organization to help Meyknecht and his desire to be a part of the Thoreau Bicentennial, without actually traveling to Concord!

After a volley of emails— Meyknecht doesn’t speak English well and I don’t speak German — Meyknecht via the miracle of Google translation services  — was able to tell me that he was going to send a stone to Thoreau Farm, and asked if I could I place it on the cairn at the cabin site at Walden Pond.

Meyknecht is a solo sailor in a vast sea when it comes to finding like-minded Thoreauvians in his hometown.

“Unfortunately, I don’t know how popular he is in Germany,” wrote Meyknecht. “He who seeks finds. I would like to ask you to place a stone, which I have chosen from my homeland, to the place where his cabin was.”

How could I refuse?

The stone arrived two days before our birthday celebration at Thoreau Farm, but not without some anxiety on Meyknecht’s part. It was expensive to send the 3-pound rock in the mail, but Meyknecht’s friend, Peter Berkenharn of Mettingen, offered to help with the postage. It arrived packed in a styrofoam box, placed inside a simple cardboard box decorated with German and United States custom’s stickers. 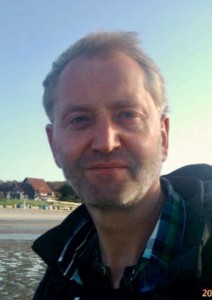 Meyknecht, Berkenharn’s and Henry’s initials were hand carved into the stone they had decorated with gold paint. 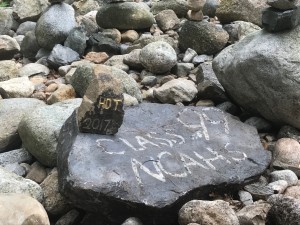 Carved into this rock (small rock)  are WM, PB, and HDT.

“I like attentive people who have a clear conception and clear ideas,” wrote Meyknecht about his love of Henry Thoreau. “People who don’t follow the mainstream. No other author has impressed me so much like Henry David Thoreau. He has really struck a chord with me. It is perhaps because my inner spirit comes very close to that of Henry. Have your courage to show your rough edges. Don’t be a yes-man. … All citizens of Concordia will know what I mean.”
Thank you, Werner Meyknecht, for reminding us how lucky we are to have our spiritual home of Concord, whether we are in Germany or in New England. 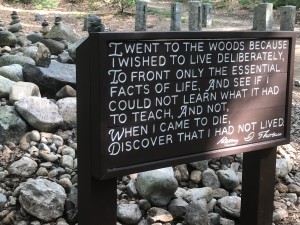