Posted on April 17, 2017 by Margaret Carroll-Bergman | Comments Off on Sauntering the Year with Henry David Thoreau

“I would make education a pleasant thing both to the teacher and the scholar. This discipline, which we allow to be the end of life, should not be one thing in the schoolroom, and another in the street. We should seek to be fellow students with the pupil, and we should learn of, as well as with him, if we would be most helpful to him.” — Henry David Thoreau, Correspondence to Orestes Augustus Brownson, December 30, 1837

These words set the tone for St. Benedict Catholic School in Garfield Heights,  Ohio this school year, as we “Saunter the Year with Henry David Thoreau” to celebrate the bicentennial of his birth. At our year-end  faculty meeting last May, I presented my multi-grade curriculum proposal about the upcoming bicentennial year. Everyone was overwhelmingly positive and enthused about this collaborative endeavor.

Reflecting upon our Thoreau Bicentennial during summer break, however, it became clear to me that the students were not going to be the only recipients of Thoreau lessons, which would teach them about this iconic American author, philosopher, and naturalist. If our year was going to be successful, then the teachers would have to become pupils. As a Thoreau Bicentennial Ambassador, I was able to help the teachers become comfortable with Thoreau and his ideas, so they could impart that knowledge to their students.

I imagine that Henry would have been proud of our venture — teacher becoming pupil. Teachers were given websites to research Thoreau, which included the Thoreau Society, Walden Woods, Henry’s Hat, and Concord Museum. Our faculty worked as a collaborative team: asking questions, offering suggestions, and assisting partner teachers in preparing lessons.

As this educational enquiry transpired, I had to smile because Henry seemed to be the master teacher in every room since the Maxham daguerreotype of Henry hung upon the wall of each classroom.

It was as if he were saying, “Here I am. Remember my thoughts about education for both teacher and pupil.” 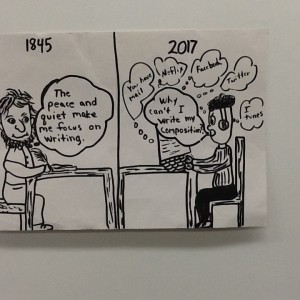 Everywhere teachers and students looked, there was Henry looking over their shoulders and guiding them, including the halls, since he had a place of honor in our trophy cabinet. Henry had become so much an integral part of our school environment that during a particularly difficult day, I would look at the daguerreotype and ask myself, “What would Henry do?” Even students, when encountering a dilemma in class, would ask me what I thought Henry would say about the matter and what he might suggest to do about it.

The learning not only occurred in the classroom, but as Henry advised, it happened outside as well. When parents asked their children what they did in school, the typical answer, “nothing,” was not the response. Rather, parents were given a barrage of information about Henry and his visits to St. Benedict School. The enthusiasm of their children was the incentive parents told me they needed to refresh their own memories of this American author, as well as read his works.

As an educator, this bicentennial year provided me with the greatest growth I have experienced in years in a relatively short time. Surprisingly, even though I had incorporated Thoreau into my own Language Arts curriculum at the junior high level, I, too, became a pupil and learned. First and foremost, I knew that if Henry was going to be relevant, he had to become a real and tangible person to especially the primary school children. He could not just be an author in a book or a face on a wall. So, I became Henry. 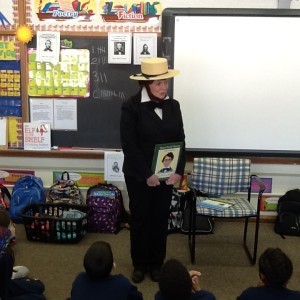 The author as Henry David Thoreau

At the September kickoff to the Thoreau Bicentennial, students met Henry at an assembly, and he took them for a saunter around the baseball fields of the school. Then, as he had done during his own time, he threw a watermelon party for everyone, and from that moment on, the year has been unbelievably filled with joy. Many accounts of Thoreau describe him as being aloof, caustic, and abrupt. Our year has proved these depictions as not entirely accurate. One could see how children would gravitate to him during his life as the students of St. Benedict Catholic School would flock to him when he walked through the halls or entered a classroom to read to the students.

They grabbed his hands and hugged his knees. Smiles permeated the faces of the children, and I had the distinct privilege of witnessing this firsthand as Henry. 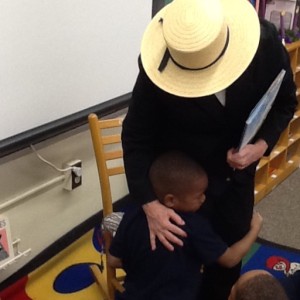 As a Thoreau Bicentennial Ambassador, I saw the need to simplify Thoreau enough to make young minds receptive to him, if his legacy is to be preserved for future generations. In addition, I was learning more about myself and creative abilities through this special year. Creating and publishing three children’s books about this author was not something that I had ever anticipated doing.  These books are enabling St. Benedict’s primary teachers to incorporate writing, history, art, and discussion into their curriculum while introducing Thoreau to their young students. Also, I became the pupil as my publisher guided me through my writing and illustrations. In turn, I taught my students the writing process in a very personal way and to always be awake for the unexpected opportunities that may enter into their lives. 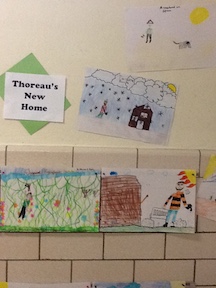 Throughout our celebration of Henry’s 200th birthday, teachers were expanding their knowledge of Thoreau across disciplines.

Science teachers studied the biome of Walden with their classes, and then had students put Henry in an alternative biome explaining similarities and differences.

Math teachers had students graph the dimensions of Henry’s cabin at Walden then create their own tiny house on graph paper. Another teacher grew beans in the classroom just as Henry did in his garden and measure their growth. Social Studies teachers incorporated Thoreau’s “Civil Disobedience” and “Plea for John Brown” during Black History month in February. In fact, one class attended a program on the Underground Railroad and actually “met” John Brown. Teachers were discovering that Thoreau, although primarily known as an author, could be introduced in all subject areas not just Language Arts.

It goes without saying that Language Arts teachers really soared in their classes. Students learned to model Henry and describe nature in unique ways as he had done with such clarity.

One student wrote, “When I was on a flight, the most beautiful thing I saw was the sun rising, making the sky orange, and all the clouds underneath me look like rolling pieces of cotton from a pillow.”

Another wrote, “The soft sounds of rain hitting my window, while light flashes and rumbles from the clouds. That sound soothes me even in my darkest days.

One young man described this feeling about the ocean saying, “I love watching the waves as they crash into each other, the various hues of blues are calming to me.”

Another student when explaining Henry’s profound words composed the following: “The world when I were born was clean and fresh. I hadn’t made an impact on it yet. Every day I fill it with myself and what I experience. I paint my life on the canvass before me. It is mine to create.”

Students were also able to journal their thoughts, sometimes disagreeing with Henry.

One response to Henry’s statement that his greatest talent was having few wants indicated the following: “Although I admire Henry for not wanting a lot of things, I could not do that. There are many things that I want, so need a good paying job to purchase them.”

Granted, this was not response that was desired, and the concept of simple living still needs to be understood; however, Henry would have desired such honesty in writing whether he agreed or disagreed with it, not just blind agreement but thinking for oneself. Another example included a debate about whether Henry had three chairs in his cabin or six. Some students were adding the one for solitude, two for friendship, and three for society to equal six chairs. It was a good brain exercise as students finally came to the realization of what he actually meant through discussion.

In addition, students illustrated narratives they wrote to describe what they would do with Henry if he visited them today. A few students wrote beautiful accounts of taking him to the library.

One student tenderly stated: “I would take Henry to the library to show him the books he wrote on the shelf. Knowing how much he appreciated libraries, I think he would feel proud that people were still reading his books 200 years after his birth.”

Students across grade levels also received a Flat Henry to take home and record what they did together. Henry became a part of their family as he attended basketball games, went on park walks, to the library, and even to the emergency room as one kindergartner relayed, “I had to get an X-ray on my arm but having Henry with me made me feel better.”

Even art played a factor in learning about Thoreau. Students were involved in sketching items from nature as Thoreau had doodled in his journals, illustrating their narratives, and even creating editorial cartoons about what might be Henry’s comments on modern society. Also, students recycled their own paper to create covers for their journals. The list is limitless to what the students are learning about this American icon through various activities and lessons. What is wonderful is that we are all engaged — teacher as well as student. Teachers are learning from their students and students are learning from their teachers. All are actively sharing as Henry thought we should be.

Children can relate to the simplicity of Henry. He was a dichotomy, being complex, as well as quite simple. His innocence and pure joy for life endears him to children. Henry is continuing to inspire children as well as adults to grow creatively and intellectually.

Therefore, this year has been “a pleasant thing for both scholar and teacher,” as Henry put it. Through the years, we will all continue learning and sauntering with Henry David Thoreau since we have made him our resident author at St. Benedict Catholic School. He has a permanent place in our trophy cabinet and in our classrooms. More importantly, however, he will continue to impact our intellects and spirits. Isn’t this what education is all about? Henry knew this. Now, so do we. Henry’s daguerreotype will persist to look upon us as educators and scholars in the years to come silently encouraging us to grow with each other.