Thoreauvian World Domination Faith in the Seed of an Idea

Posted on May 1, 2017 by admin | Comments Off on Thoreauvian World Domination Faith in the Seed of an Idea

“Such Irish as these are naturalizing themselves at a rapid rate-and threaten at last to displace the Yankees-as the latter have the Indians” The Journals, 1851

He wrote of Brister Freeman, a former enslaved Concordian resident who had purchased an acre of land in Walden Woods in the late 1770’s and whose name still holds title to Brister’s Hill and Brister’s Spring. If you are in the area, it is just the other side of Rt 2, inside the Hapgood-Wright Town Forest of Concord. He was most certainly not an “immigrant,” but one who had come to this country under the force of others. The Robbins House in Concord offers more information about him and other African American Concordians, including Ellen Garrison, Henry’s contemporary. We know of her through her letters, but there are many other stories, lives, cultures who are lost to time.

At Harvard, he took Italian, French, German, Spanish and was adept at Latin and Ancient Greek. I know plenty of young linguists, including myself, who were also inspired to take these languages as part of their Thoreauvian educations. He also had great respect for Native Americans and was adept at finding arrowheads on the ground, symbols of a lost culture.

Thoreau had all of these humans in his consciousness as he described the varied world around him. And the world has received his words, to the extent that they have taken in his ideas as their own. His ideas influenced the writings of Tolstoy and Chekov. Gandhi was introduced to the works of Thoreau by Henry S. Salt, who had written the 1890 Thoreau biography as well as other books on Ethical Vegetarianism. And Nelson Mandela, the ultimate symbol of Civil Disobedience, spent 27 years behind bars under Apartheid before he became President of South Africa. This is how the seeds of ideas get dispersed. Henry would have been proud. 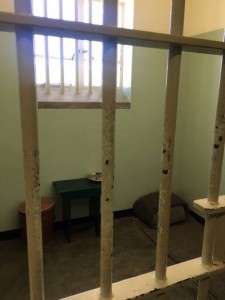 Nelson Mandela’s cell where he spent part of his 18 years in prison on Robben Island. He spent a total of 27 years behind bars. (Photo courtesy of Renata Nowalk-Garmer}

Is there any other American writer whose most valuable ideas have been exported like this? Alexander Hamilton? Mark Twain? Even Walt Whitman, who “contains multitudes,” has a voice for the modern era, but one which is difficult to translate. Walden the pond also benefits by being at the crossroads of education and innovation. Even the most analytic MIT student needs to escape to the woods every so often. Families who are in the country because of the H-B 1 Visa can be overheard on the shores of Walden on any given summer day. Close your eyes, and except for the sand, you could easily imagine you are at the U.N.

Speaking of politics, sometimes Thoreau could predict the future in examples from the past.

“The orator yields to the inspiration of a transient occasion, and speaks to the mob before him, to those who can hear him; but the writer, whose more equable life is his occasion, and who would be distracted by the event and the crowd which inspire the orator, speaks to the intellect and health of mankind, to all in any age who can understand him.” –Walden

Sound like anyone we know? Any popular ruler speaking to a mob before him? But thoughtful ideas spread like seeds, cross political borders without regard to fear or prejudice. They transcend, space, time, walls and even language. The only modern equivalent we have is technology; where the medium is the message. Whether it be stone, paper, breath or video. And Henry continues his previous section:

“A written word is the choicest of relics. It is something at once more intimate with us and more universal than any other work of art. It is the work of art nearest to life itself. It may be translated into every language, and not only be read but actually breathed from all human lips;— not be represented on canvas or in marble only, but be carved out of the breath of life itself. The symbol of an ancient man’s thought becomes a modern man’s speech.”- Walden

Eugene F. Timpe published a book of essays in 1971 called Thoreau Abroad  covering 12 different cultures/countries (England, France, Holland, Germany, Switzerland, Italy, Bohemia, Russia, Israel, India, Japan, Australia). What would that number be if a similar volume were to be published now, in 2017?

There is a new project to be done, indeed, which I imagine would be easy enough to do. It is possible for us to translate Walden “into every language,” as stated above. And “carve it out of the breath of life itself.” It is entirely possible to request this of the visitors of Walden, alone.

Using very basic technology, contributors could be asked to translate and videotape themselves speaking a single line from the book Walden into a videocamera. A website could be created to receive submissions from around the world to capture and document the more obscure (and dying) languages.

What would be the biggest barrier to the completion of such a massive project?

There are certainly enough people across the world who would volunteer their time and language skills. The technology has never been cheaper. Many excellent translations of Walden have appeared in languages that Thoreau could have only dreamed of learning, including most recently, Farsi.

What then would be the biggest problem for this or any other project to celebrate the diversity of peoples?

Walls. A killing off of support, both monetarily and politically. Massive cuts to the National Park Service, and the National Endowment for the Arts. Increase in funding for Defense and Security, both terms being NewSpeak for their inherent opposites, War & Fear. A strict political separation of people which prevents cross-pollination of ideas, languages and people.

Keep the faith. Plant a seed.