“I have thus a tight shingled and plastered house, ten feet wide by fifteen long, and eight-feet posts, with a garret and a closet, a large window on each side, two trap doors, one door at the end, and a brick fireplace opposite. … I thus found that the student who wishes for a shelter can obtain one for a lifetime at an expense not greater than the rent which he now pays annually.” ~ Henry Thoreau, “Economy,” Walden

This week, I walked down a paved path and caught a glimpse of the Thoreau house perched quaintly beneath a stand of tall trees. This structure had been built to Henry’s specifications, 10 ft. by 15 ft. It even had its own pond, just two dozen steps away from the front door. But this was not Walden, and this was not Concord. This house sits on the property of Tyler Arboretum in Media, Pennsylvania, less than 20 miles southwest of downtown Philadelphia. 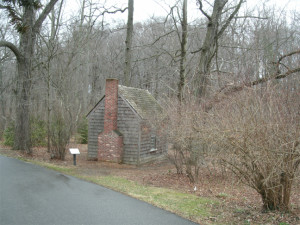 Four years ago here, I wrote about my visit to the Penn State Altoona campus in western Pennsylvania. Students there had built a Walden house replica in an adjacent woodland referred to as “Seminar Forest.” At the time, I thought this was the only such replica in the state. Now I’ve learned about and seen firsthand the one at Tyler, which is just a short drive away from my own home.

Tyler Arboretum consists of 650 acres of gardens, woodlands, wetlands, stream valleys, and meadows. The site began as a Quaker farmstead in the 1680s, when Thomas Minshall bought this land directly from William Penn. Generations of Minshalls, Painters, and Tylers lived here and planted representative trees, bushes, and flowers. In 1944, descendent Laura Tyler bequeathed the property to a board of trustees. It has operated as a non-profit public garden ever since. 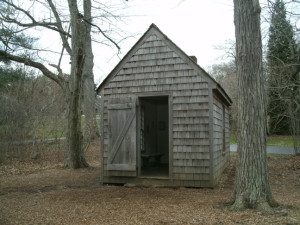 Front of the Walden replica

In 2008, the arboretum launched a project called “Totally Terrific Treehouses.” Seventeen new, fun, and kid-friendly buildings were installed around the property. Some of them are still standing and are still in use. The Thoreau house is one of them.

At the time, arboretum executive director Rick Colbert explained to a reporter for The Philadelphia Inquirer that the exhibition was “about connecting people to trees and our natural world. And what better way to do that than to have visitors experience a cabin like the one where Thoreau chronicled his life in the woods?”

The Walden replica was created by Pine Street Carpenters of West Chester.

Company president Brendan Dolan said, “While not a traditional tree house, it captures the essence of what many of us long for in a tree house — a counterculture sanctuary that provides an intense experience in nature.”

His brother, Mike Dolan, who is also Pine Street’s marketing director, had been turned on to the Transcendentalists in high school and had majored in English at Villanova. He described the building as “a metaphorical tree house, a symbol of Thoreau’s effort to help us appreciate not only the beauty of trees but the splendor of nature in general.”

The workers followed Roland Robbins’ plans, based on his excavations at Walden Pond. They used cedar shingles for the exterior, horsehair plaster for the inside walls, and one thousand bricks for the fireplace and chimney. Two bark-covered logs for the rafters came from Maine. The two windows are reclaimed period antiques, with 16 panes over 16 panes. Unlike other replicas, this one includes a sleeping loft above the fireplace. It took six craftsmen about five weeks to build this Thoreau house. The final cost was about $30,000, with a dozen companies donating time, materials or money. Watch the video of the construction here . 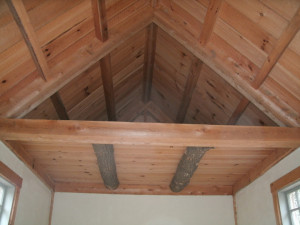 The loft looks comfortable enough to sleep in.

Inside, the walls are decorated simply enough, with a picture of Thoreau, a brief biography, a description of his original Walden house, and seven framed quotes. Two benches and a bookcase are the only furniture present. Many children’s books are scattered around for visitors of all ages to read and enjoy. I recognized D. B. Johnson’s Henry Hikes to Fitchburg and Henry Builds a Cabin, as well as Henry David’s House by Steven Schnur and Walking with Henry by Thomas Locker. Other picture book favorites like Eric Carle’s The Very Hungry Caterpillar are also here. What a great use of this space! 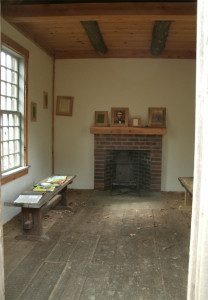 Kelly Nicholson, who works in the education office at Tyler Arboretum, showed me around the property. We walked and talked for more than an hour, admiring many of the unique trees here, including the tallest sequoia east of the Mississippi River. She pointed out the garden area near the Thoreau house and explained that this part would soon be reconstructed and reconfigured. A new edible garden will be planted, using an integrated system of both vegetables and perennials. It will serve as a model for what gardeners can do at home. A new classroom and community space will be created here, too. Kelly showed me the beds of the previous garden that will be replaced over the coming months.

“I think that last year, the groundhog benefited the most from our garden,” she said.

Sounds Thoreau-ly familiar. But she warns that if people come to see the Thoreau house before fall, they may find that at least one of the pathways could be blocked by construction. If you’ll be traveling from some distance, you may want to call first to check on the status of the project. 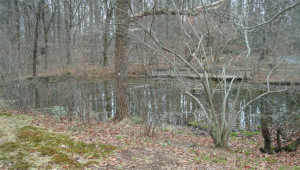 Pond in front of the Tyler Walden house

But the Walden house is just one singular feature among the beautiful blossoms, fragrant flowers, and tall, majestic trees that you can walk among at Tyler Arboretum. It’s a restful place that is perfect for walks and thoughtful contemplation. An appropriate setting indeed for one of Henry’s houses.

This whimsical wood caterpillar is sure to delight children and adults alike!