“For many years I was self appointed inspector of snow-storms & rainstorms and did my duty faithfully – though I never received one cent for it.” ~ Henry Thoreau, Journal, after February 22, 1846

When I heard the sound of a nearby gas-powered engine starting up, I hurried to put on my boots and my coat and to head outside. I wasn’t about to let my next-door neighbor use his noisy and environmentally-unfriendly snow-blower on my sidewalk and driveway.

Ask anyone who knows me, and they’ll tell you that I am a snow lover. And one of the activities that I love most is shoveling snow. I cannot explain this addiction, other than to say that I like the sound, I like the solitude, and I like the rhythm of the physical activity. So when I woke up after our most recent storm and saw that more than seven inches of the white stuff had fallen overnight, I was overjoyed. Over the moon, really. But at least I waited until after dawn to go out and to attack the pavement and the driveway. 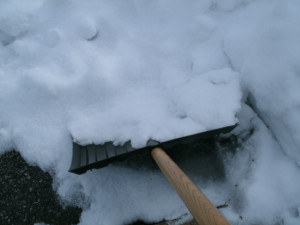 There’s a science to shoveling snow, you know. You have to time your approach to gauge the duration and consistency of the storm. Shovel too soon, and you could leave the sidewalk vulnerable to an ice coating that will be too slick to walk on. Put off shoveling until the storm ends, and you will have more snow to remove, and you may also have to crush through a thick top coating of ice. Wait a day or two longer, and that snow will become reluctant cement. Good luck clearing any of it without a pick-ax.

My strategy is to keep up with the snowfall reasonably and regularly. I go out early. Once I do the major work, I have to go back later only for quick touch-ups. Whenever the sun comes out, I let the warmth of the rays do the rest of the work for me. If my timing is perfect, the pavements are bone-dry within a few hours, or at least, on the following day.

It’s impossible to shovel a snowstorm without inspecting it. This time, I was one of only two people out there on our block. Someone three doors down and across the street was shoveling quietly, too. The snow fell straight down, steadily and softly. The township plow hadn’t come through yet. Sounds from our part of suburbia were magnified in the cold air. A murder of crows  flew over me several times, calling to one other. A flock of geese went over, too, but the snowy sky hid them from view. Their’s seemed like voices from the heavens. A woodpecker tapped at a distant tree. A blue jay cawed from the top of another one. The songbirds were huddled in bushes somewhere, I was sure. But some of the other wild ones were out and about.

While I tidied up the walk a bit, a woman with Small Dog in Sweater walked by. I said hello and asked the little one if he was having a good time.

“We’re looking for a place to ‘go,’” his pet mother said.

I laughed. “Well, there aren’t any green patches out here today, unfortunately for him,” I said.

I successfully defended my sidewalk from the noisy neighbor’s machine. (Had he chatted with the woman and dog? No, because he was too busy and couldn’t hear them.) And look at the difference between my part and his! Mine is organic. His is mechanical. Nature doesn’t make straight lines. And he leaves tire marks behind. I leave only boot prints. 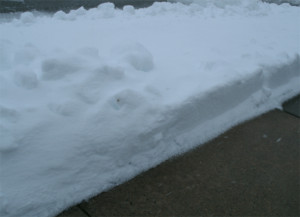 The woman and the Small Dog came back around several minutes later. “Success?” I asked.

Later in the morning, I heard Neighbor John start up his coughing snow-blower. Although his machine is even more intrusive than the one my other neighbor has, I tolerate John’s because he respects my space. He and I also tag-team on behalf of Mrs. Jones, the elderly widow who lives across the street. Her driveway is more than two times longer than either one of ours. Once John and I have attended to our own properties, we move over to hers. I tackle the carport and its edges with the shovel, and he does the driveway and the sidewalk with his blower. This is actually the only time John and I ever see each other. We live in suburbia, after all.

John waved as he aimed his snow-eater toward her driveway. “Hey, I haven’t seen you since …”

We worked together to get the carport, driveway, and sidewalks cleared off. Mrs. Jones came to the door in her housecoat, and I warned her to stay inside for the day. I also waved off her offer to pay us. John was wearing earplugs – another inconvenience a shoveler doesn’t have to worry about – so we couldn’t talk when the machine was on. Whenever he had to turn it off to maneuver, he and I caught up a bit on personal news.

“Didn’t you write a poem about this last year?” he asked.

“Oh, yeah, I did.” (I had forgotten.) “I’m in the middle of writing a blog post about the snow right now.” (At least I’m consistent in what I get passionate about.)

We were almost done with the job when John called, pointed, and turned the machine off again. “What?” I asked.

“We flushed out a rabbit.” It had taken shelter under one of Mrs. Jones’s yews. “He ran over there.” John pointed to another neighbor’s yard, where another nice bush could provide refuge.

Wouldn’t you know? I had missed seeing this encounter myself. I called over an apology to the bunny to let it know that we were almost done with our work. When every surface was cleared for Mrs. Jones, John and I said our goodbyes and returned to our own houses. I admired our good work on the way back.

The next morning, an early-riser co-worker e-mailed me from the office. “Be careful when you come in,” she wrote. “The sidewalks and the parking lot haven’t been cleared yet.” 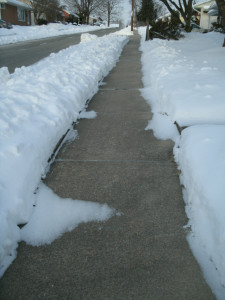 “No worries,” I replied. “I’ll bring my shovel.” A good snow-storm inspector is always prepared.

This entry was posted in Environment, General, Henry David Thoreau, Nature, The Roost and tagged Henry Thoreau. Bookmark the permalink.

One response to “Man versus Machine”