In the fall of 1847, Henry Thoreau closed the door on his house at the
edge of Walden Pond and left this sanctuary because he “had several
more lives to live.” During the decades that followed, other frugal
Yankees of Concord dismantled the wooden structure (which Thoreau
himself had recycled from a railroad worker’s hut) and used its pieces
to repair or enhance a variety of buildings in town. Its fragments
were scattered so well – like the seeds of a wind-blown dandelion –
that authentic re-assembly of the original home could never take place.

But Thoreau’s literary and inspirational reputation escalated during the 20th century. Along with this attention came the symbolism found in the image of that simple house in the woods. Readers longed to have one of their own, perhaps even one made from “tall, arrowy pines.” Thanks to amateur archaeologist Roland Robbins and Thoreau’s own written details, blueprints became available so that anyone, anywhere, could construct a Walden house. We hear of them standing in various locations from around the globe.

Henry Thoreau never set foot in western Pennsylvania. He came to within 275 miles of this area only twice: when he lectured in Philadelphia on November 21, 1854; and when he traveled across New York State in May 1861, on his way to Minnesota. Yet a new connection now links Thoreau with this place. A Walden house replica was recently built by students at the Altoona campus of The Pennsylvania State University.

The school is on the northwestern edge of Altoona, a city of 46,000 residents that lies among the Allegheny Mountains. The campus has always had strong ties to the nature surrounding it. Tall trees tower over the paths between academic buildings. A reflecting pond is home to a variety of ducks, who are the unofficial but beloved mascots of both current students and alumni alike. In 2008, Penn State Altoona bought 40 acres of adjacent woodland, including a hill that rises 300 feet above the campus. This tract is now known as “Seminar Forest.” Environmental studies students created hiking and mountain biking trails that lead to its summit and to an outdoor classroom at the top. At the foot of the hill and next to the posted trail map stands their new Walden house.

Its appearance is similar to the one that Thoreau constructed near a cove at Walden Pond in Concord in 1845. But there are noticeable differences. Instead of “three chairs for society,” the interior design of this house includes built-in wooden benches along three walls. Instead of a body of water lying outside, there’s a nearby hand-driven water pump. Instead of a rail commuter line with cars that speed toward Boston, a two-lane road leads “up the mountain” to Wopsononock, a high overlook that is peppered with radio towers and is a popular parking spot for young people. 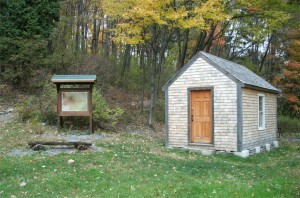 I lived in the Altoona area for fifteen years. Thanks to professors Sandra H. Petrulionis and Ian S. Marshall, I recently had a chance to return and chat with the students about Henry Thoreau. We were due to meet at the Walden house at noon. I walked over early to take in the atmosphere before the others arrived. What a peaceful site! And yet, it wasn’t too far away from the school. I could hear the Winchester chimes of the chapel carillon ring on each quarter hour. At the stroke of noon, the melody of “O God, Our Help in Ages Past” wafted through the air. If I went to school here, I’d spend as much time as possible in this natural place.

As I admired the autumn foliage and gazed up the hill, I was reminded of something Thoreau wrote in the “Tuesday” chapter of A Week on the Concord and Merrimack Rivers. He recalled the moment when he once stood upon Mount Greylock in the Berkshires, and looked down upon Williams College:

“It would really be no small advantage if every college were thus located at the base of a mountain, as good at least as one well-endowed professorship. It were as well to be educated in the shadow of a mountain as in more classical shades. Some will remember, no doubt, not only that they went to the college, but that they went to the mountain. Every visit to its summit would, as it were, generalize the particular information gained below, and subject it to more catholic tests.”

Mirroring Thoreau’s suggestion, this college campus now has its own mountain. Kudos to the Penn State Altoona administration and students for recognizing the value of this natural setting. It’s the perfect place to put Henry’s house.