“Can there not be a government in which majorities do not virtually decide right and wrong, but conscience? – in which majorities decide only those questions to which the rule of expediency is applicable? Must the citizen ever for a moment, or to the least degree, resign his conscience to the legislator? Why has every man a conscience, then? I think that we should be men first, and subjects afterward. … The only obligation which I have a right to assume is to do at any time what I think right.” ~ Thoreau, “Resistance to Civil Government”

Like fellow blog poster Sandy Stott, I too am an introvert and am not the biggest fan of crowds of any size. Over the years though, I have set my discomfort aside to attend a fair number of Major League Baseball games, NFL football games, and stadium rock concerts. I even went to a Farm Aid gathering in Illinois farm country in the late 1990s. And, as events unfolded, I knew I had to participate in the March on Washington last weekend, even though I figured the crowd here would be sizable. I was prepared to walk among thousands of people. Naturally, I was somewhat shocked but downright heartened to end up sharing a personal space with HUNDREDS of thousands of people. 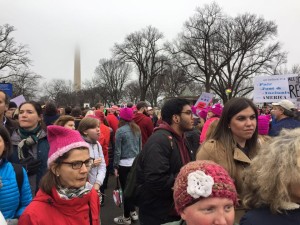 The crowd, with the Washington Monument in the background, in low cloud cover. Photo – Don Jewler

My two companions and I began the day at the Metro station near their suburban Virginia home. The first two trains that stopped were already packed solid with people, many of whom were wearing pink hats. The doors opened, but there was no room left for more passengers. “I’ve never seen it like this,” said one of my well-traveled friends. “It’s worse than Calcutta!” We decided to take a train going in the opposite direction, to ride through a few stops, and then to get off to board an emptier train heading toward DC. The plan worked. But soon enough, we too found ourselves fully immersed in a mass of humanity, cushioned inside a fully-loaded Silver Line bullet zipping toward the Mall. Every seat was taken, and every other inch of every car was filled with someone standing. We proceeded in fits and starts. The train came to a stop for seemingly no reason, and we groaned. After what seemed like an eternity, it started up again, and we cheered. Even in such close quarters, everyone was merry, kind, patient, tolerant, and respectful. We were going to the same place. We held common beliefs. We could be polite to every stranger and to every fellow traveler who had come from various parts of the country. Why couldn’t our government officials behave as politely? 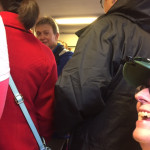 From the Metro station at L’Enfant Plaza, we walked toward Independence Avenue. We quickly became part of the sea of people, stretching as far as we could see. Some folks had even climbed into the trees to get a better look. We waded through the crowd to find good places to stand. We weren’t anywhere near the stage, but we could hear and see the speakers through several Jumbo-trons and stacks of audio equipment. We got to hear Michael Moore, Ashley Judd, and some of the others before we waded again toward the edges. After what seemed another lifetime, our mass began moving down the street. No one commanded us to start marching, but march we did. With so many people, we could go in only one direction. A woman named Mary Ann from St. Louis chuckled from behind me, “This isn’t as much a march, as it is a mingle.” So it was. We chanted, we laughed, we marveled at the sight and the feeling and the sheer power of being among a large group of fully committed people. When my companions and I decided to cut out and head back to the train, we saw that the parallel streets and the Mall were also filled with people marching, heading toward the Washington Monument. Independence Avenue couldn’t hold us all. What a stunning sight! 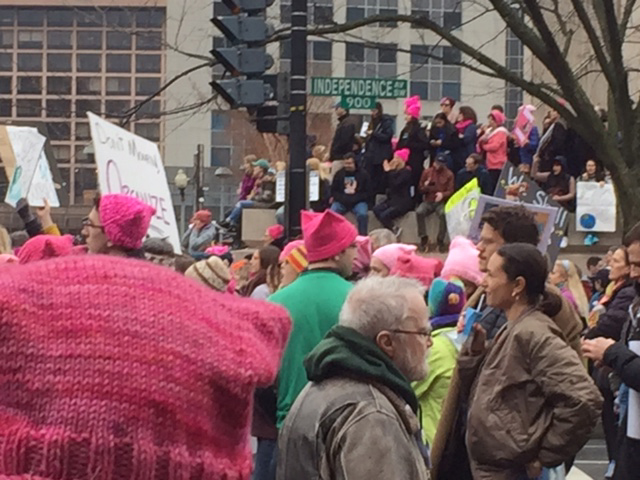 “When I was let out the next morning, I proceeded to finish my errand, and, having put on my mended shoe, joined a huckleberry party, who were impatient to put themselves under my conduct; and in half an hour – for the horse was soon tackled – was in the midst of a huckleberry field, on one of our highest hills, two miles off, and then the State was nowhere to be seen.” ~ Thoreau, “Resistance to Civil Government”

Henry Thoreau’s act of civil disobedience constituted one small experience in his life. It was personally meaningful, but it was just one night in jail. When he was released, he could return to the schedule he had set before his day had been interrupted by the sheriff. He didn’t want or expect the government to take any more time out of his life than it already had.

Our experience today is different in terms of both scale and duration. These Marches were held in hundreds of cities worldwide and involved millions of individuals, not just one. This commitment constituted just one day in our lives, and it was spent in a different kind of environment than we were used to. But unlike Thoreau, we know that our work is far from over.

On Sunday, January 22, the Day After the March, my friends and I went back downtown to do some sightseeing and to see a gallery exhibit. Independence Avenue was empty now, without the hundreds of thousands filling it. I could see the buildings and the streets that I couldn’t see, 24 hours earlier. Birds had returned to the trees. Nearby pussy willows – ironically enough — were fuzzing out in the gallery gardens. Life had returned to normal. But only in a way. 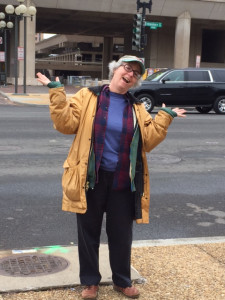 Alone, on Independence Avenue, the Day After, with room to spare. Where is everyone? Photo – Don Jewler

Our March is hardly over. Yes, we have all returned to our homes and to our own schedules and lives. But our One Day Among Others marked just the beginning of our collective involvement in this particular resistance. This new government will continue to demand much more time and energy from us than it already has. Thoreau’s personal brand of civil disobedience was the once-and-done kind. Ours seems as though it will become infinite. Yet, like millions of battery-powered drum-beating bunnies, we and the movement will keep on going, with no clear end in sight. At least we can take comfort in knowing that we’re not going the path alone.

4 Responses to The Day(s) After