John Thoreau and the Rusted Edge

Posted on January 10, 2017 by Sandy Stott | Comments Off on John Thoreau and the Rusted Edge

It’s one of the tragic stories in Henry Thoreau’s life: the loss of his brother John to lockjaw on January 11, 1842. John had been sharpening a razor when he cut his finger. Tetanus quickly set in. And he died a painful death of lockjaw in his brother’s arms days later. Henry was devastated to lose his brother and best friend.

How can we not think of John Thoreau anytime the possibility of tetanus comes up? Here’s something that happened to me a few years ago. It hardly matches the horror of John Thoreau’s death. But it was no less real to me.

I like lighting candles, especially for creative inspiration. The only trouble is that the little glass globes I use end up with unmelted wax at the bottom. That’s when I get out my trusty flat-head screwdriver to dig the wax out. Soon the wax pops out and the container is ready for another candle. 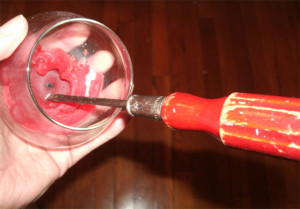 A few years ago, I was digging out the last wax from one of these globes when I heard a crack and felt pain at the same time. The globe had broken and the screwdriver had dug right into the palm of my hand. Yikes!

This screwdriver is my all-purpose tool. I use it for everything. My father gave it to me when I was young, so that I could “help” him with light maintenance around the house. So yes, it’s old and, yes, it’s rusty. My immediate thought was that I hadn’t gotten a tetanus shot in a long time. My second thought was of the image of John Thoreau dying in Henry’s arms.

I picked as many pieces of glass out of my hand as I could. I cleaned up the blood — although with this puncture wound, there wasn’t too much of it. And I made a phone call to my general physician.

When I got into the doctor’s office, he asked the usual, “What brings you in today?” I told him about the candle and the screwdriver. I said I needed a tetanus shot. I lifted the bandage, and he looked at the wound. Then he walked over to the supply cabinet to get the shot ready.

“I have to tell you, whenever patients come in here, it’s not usually to get a tetanus shot,” he said.

That’s when I started blabbering. I told him the story of John and Henry Thoreau: the cut finger, the tetanus, the death by lockjaw. The doctor listened quietly to my rambling; then he dug the needle into my arm. I turned my head away so that I wouldn’t see it. The whole process took only a minute or two. Soon he was back at his counter, cleaning up.

“You are not going to die of lockjaw,” he said.

“Does anyone die of lockjaw anymore?”

“In the United States? Probably not.” Good to know.

I thanked him and walked back out to the reception desk. I didn’t have health insurance at the time, so I started digging out my checkbook, expecting that the bill would be at least twenty or thirty dollars.

She looked down at the chart again. “That’s what he has written down,” she said.

I was amazed. Did the doctor cut me a break because I was seemingly traumatized by something that happened more than a century and a half ago? I half-think that he did. And I have a feeling that if I had had health insurance, the bill would have been a lot higher. I was grateful.

Eventually I had to have minor surgery to remove a leftover piece of glass from my hand, and I can still feel a tiny piece of wax that’s in there. Naturally, I think of John Thoreau every time I do. I feel sorry that John and Henry had to go through their tragedy. I welcome the medical advancements we’ve achieved since 1842.

But I’m a bit more careful these days, whenever I take my trusty (and still rusty) screwdriver to the remainders of my candles. In an odd sort of way, I have John Thoreau to thank for making me more cautious.

This entry was posted in General, Henry David Thoreau, Living Deliberately, News and Events, The Roost. Bookmark the permalink.