Posted on December 11, 2016 by Sandy Stott | Comments Off on Lion-eyes (a pun Thoreau might have liked)

At my request, Google feeds a few alerts into my daily e-mail; one sniffs about for Henry Thoreau; another tracks news appearances by mountain lions, including California’s famous, and now notorious, P-45, who, a week or so ago, did in nearly a dozen alpacas on a farm. Lions living in proximity to us will still be lions.

But my point in keeping this alert doesn’t lie in tracking celebrity lions; instead it hopes to have a finger on the slow pulse of lion dispersal, or recovery – you choose your word – in the lower 48 states. Once one of two of our country’s top predators, and so, controller, many would argue, shaper of a number of populations, lions were shot, trapped and poisoned from existence in most states by the early 20th century; the killers were the other top predator, one who doesn’t brook competition easily, if at all – us. 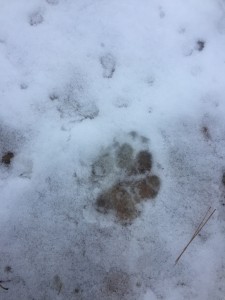 By the time Henry Thoreau was rambling a good deal in Concord, lions were long gone, as were many animals that we now take as usual or nearby – deer, bear, coyotes, even moose. But just as he tracked those with whom he shared woods, Thoreau also gathered stories of and imagined the missing, whose paths he only crossed on his ventures north, if at all.

But even in that north, lions were a cat too far. The few that might have been in deep woods, skirting, perhaps, the border were beyond Thoreau’s reach.

Even the word is elusive. It may sit (or lie on) there in a sentence, sounding like some other word, lying to the ear, which would hear the snap of a paw-pressed twig, if it weren’t so soft-footed. That’s part of its presence: you never know it’s there, until it materializes before your eyes.

Or, if it has been lying in wait when you walk by, fully aligned in your own sentence, you may never see it at all. Then, it is lion’s choice – you, or some other ambler, maybe the deer you also didn’t see?

Here, little narrative tends toward confessional – when I go the woods each day, I imagine lions, even as I live in a state where they are, officially, not. But last year, a lion was found a mere 3 miles north of our border, and, as is true for many places ripe for lion’s return, sightings make their way in the papers and cloud wildlife officials’ pronouncements regularly: “There are no mountain lions in Maine.”

“But its tail was soooo long.”

We’ve had our first smattering of snow, an inch, followed by cold, and now as I run, I am layering prints on prints; it always surprises me how many beings have gone my way. To the side, the canid tribe has been doing the same. Dogs are known by their claws marks and the way their prints tend to be longer than they are fat. Lions leave opposite tracks – seemingly fatter than they are long, and without claw-marks. My ongoing survey as I run says, no lions…again. 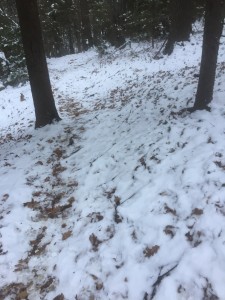 Path of prints and leaves.

Still, I cultivate the periphery…that’s where they’d be; I try to see sideways, even as I attend to the roots and rippled ground I run. And, because my mind conjures animals in a way it can’t summon theorems (for example), I sometimes shiver with awareness. I haven’t seen this lion, but I am live with its possibility. 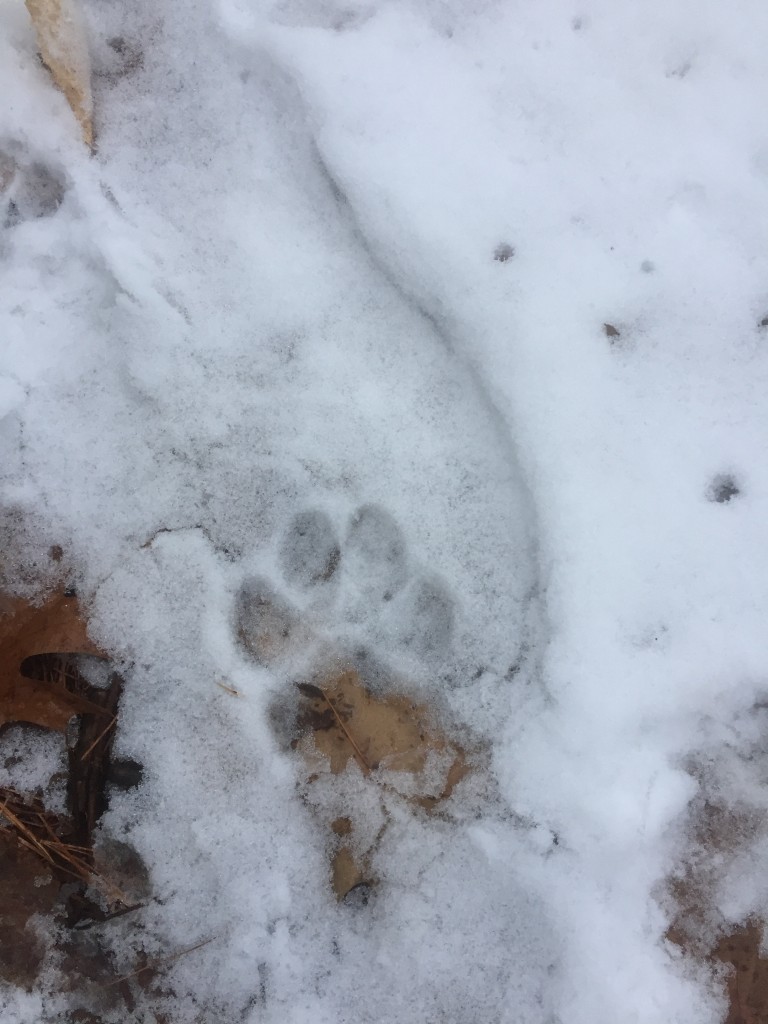