As is often true with reading, I hear a voice I’m clearly meant to listen to well after that voice has sounded; I am, as they say, late to the party. That surely was true for me with Henry Thoreau, whose then tangled sentences and habit of calling into question almost everything rolled my eyes as a teenager…just before they shut down in favor of the cinema that plays on the inside of our eyelids. That he would become a signal voice to me would have surprised my teachers, who often had to call me from the other-lands of reverie and classroom-sleep. I remembered that when I taught and had to use the gentle goad of my voice to recall my cine-dreamers.

These years later, I am a picky reader, in part because I am a slow one. If I am to spend time in the architecture of someone’s writing, I need to admire even the hallways, and I have particular need of the sudden light from a well-placed window. I pick up books, stroll some sentences and put them down; I even enjoy the mild irony that I too write little rooms that I hope readers will visit.

A while ago, as practice that I hoped would disentangle me from the internet as the yard wakened during my coffee, I began reading a poem or poems as I also tracked the bird-scurry by the feeder. Poets and birds often move similarly, and their words seemed to set up my own later in the morning.

Just so, right now. As the sun scrolls down the first-snowy pines, I read Kate Barnes’ “Other Nations,” a poem written first for another favored poet, Maxine Kumin. And, as has happened now for a number of days in a row, I disappear into its pages and lines. Barnes is a narrative poet – no sky of abstraction at which you gaze trying to name the shapes of clouds – who, late in this poem, takes you along for a buggy ride. Yes, it is, at times, horse-drawn poetry. But it moves at the pace of real perception – mine, anyways – and, when each ride is done, I am often elsewhere. Alive to the light, alive to the day, I’ve slipped the tether of the clicked world. I am alive to words and a voice that carries across time.

“Other Nations” is also about talking to animals, and, as my dogs over time would tell you, my canid diction may be limited, but I use it whenever a dog is near. And, like the good dog I sometimes am, I hear like voices across time.

Reader’s-note: I ration myself to a poem per morning; I will be well into winter before I look up from last page.

Bio-note: Kate Barnes was Maine’s first poet laureate, serving from 1996 to 1999. The volume I’m reading is called Kneeling Orion, published by David R. Godine, and, graced also by Mary Czarina’s woodcuts, it is a handsome book. 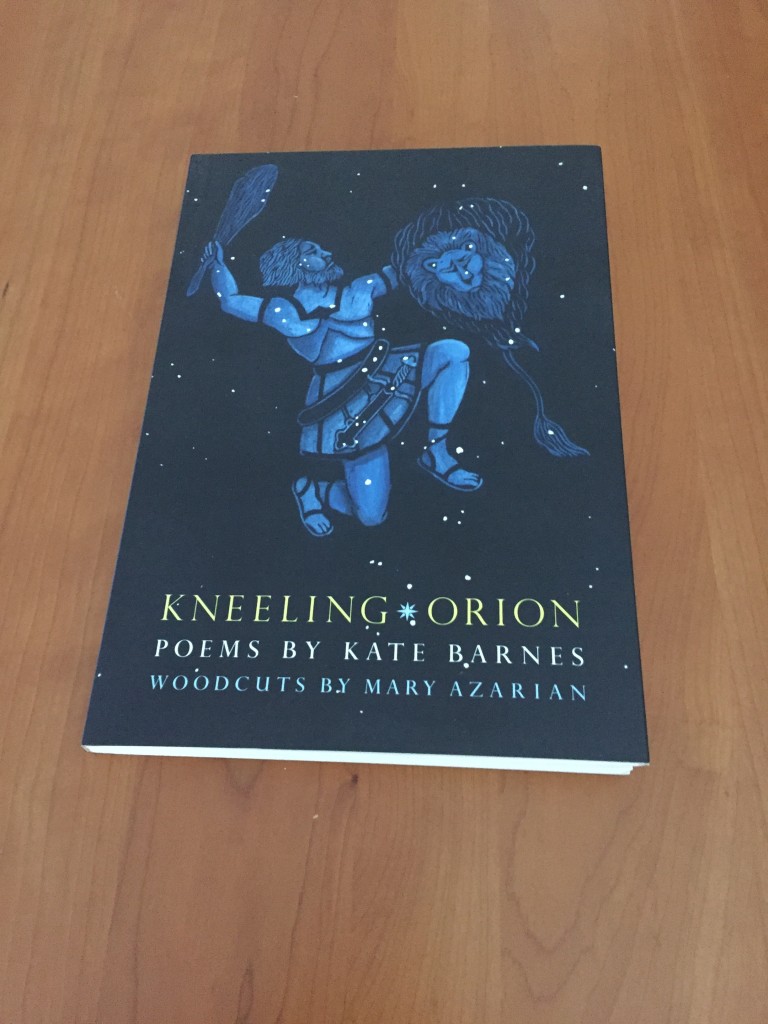 2 responses to “Hearing a Voice”