“If the injustice is part of the necessary friction of the machine of government, let it go, let it go: perchance it will wear smooth – certainly the machine will wear out. If the injustice has a spring, or a pulley, or a rope, or a crank, exclusively for itself, then perhaps you may consider whether the remedy will not be worse than the evil; but if it is of such a nature that it requires you to be the agent of injustice to another, then, I say, break the law. Let your life be a counter-friction to stop the machine. What I have to do is to see, at any rate, that I do not lend myself to the wrong which I condemn.” Thoreau, “Resistance to Civil Government”

The call came out a week in advance and from two separate organizations. Peaceful demonstrations would be held at every state capitol building on the morning of Monday, December 19, 2016. The gatherings would coincide with the time that each state’s Electoral College members would be sequestered inside, casting their crucial deciding votes on the presidential election. Finally, here was concrete action to take! Signing petitions and donating dollars to organizations can only take a person so far, in any movement. I live only 33 miles from my state capital, and I knew that I had to go. I made plans to take the train to Harrisburg early on Monday morning.

“Even voting for the right is doing nothing for it. It is only expressing to men feebly your desire that it should prevail.” ~ Thoreau, “Resistance to Civil Government” 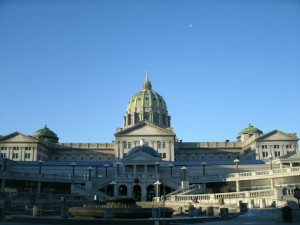 The peaceful side of the Harrisburg capitol building…with faint moon.

I had never been to the state capitol complex. I decided to walk all the way around the place to take it all in. An historical marker along the way noted that the Underground Railroad had operated in this part of town in the mid-1800s. Abolitionist and journalist William Lloyd Garrison had once spoken at a nearby church. These were good footsteps to follow, I thought, since they came from a previous time when the country was divided. Eventually I found the other protesters when I got to the western side of the block. 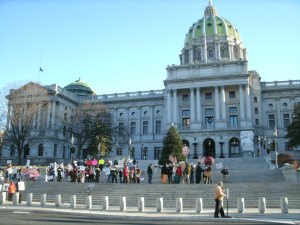 The beginning of the December 19th protest.

It was before 9 a.m., and the demonstration was just getting started. Twelve dedicated people had camped here overnight. They woke up, chanted, and sang every hour on the hour. The organizers brought some printed signs. Everyone else brought homemade ones. I decided to go Thoreauvian and hold up “Your Conscience Follows a Higher Law.” We were soon given the basic ground rules. Our permit allowed us to occupy the sidewalk and the steps. We could not obstruct traffic on the street. We could use the bathrooms inside the capitol building but would have to go through metal detectors to do this. A major press conference would be held inside at 11:30 a.m. The Electors voted at noon. Until then, everything else was spontaneous and came minute by minute. Good to know.

Many more people arrived over the next several hours. Although most were local residents, some came from as far away as Pittsburgh and Philadelphia. Every generation was represented here, too. Our numbers grew to more than 300. We chanted phrases about the key issues. We sang a special version of “The Twelve Days of Christmas” that listed a dozen main reasons why the president-elect was unqualified for the job. We participated in such calls and responses as:

And we sang the songs we all knew: “America the Beautiful,” “My Country ‘Tis of Thee,” “This Land is Your Land.” Some folks in my generation tried to get “If I Had a Hammer” going. But the young people in the crowd didn’t know the song and couldn’t pick it up. Over and over again, for several hours, we voiced our opinions. This was an empowering experience: being with like-minded people – strangers, really – and bonding toward a common cause. It felt like the right thing for us to do. In fact, it felt like the most right thing for us to do at all.

I had bundled up for the winter day with two layers downstairs, six layers upstairs, two pairs of socks, two pairs of gloves, and my old hiking boots. Only the socks fell short. My toes began to get numb in short time. I knew I couldn’t afford to let them continue to freeze. My solution was to march in place on the concrete steps, in time with the chants and the songs. This tactic worked up to a point. It was the best I could do until I could get to a warm place and take off the boots.

After 10:30 a.m., people began to file into the building, in anticipation of the press conference. Some even planned to sit in the gallery where the Electors would vote. At the same time, another group protesting another cause arrived across the street. We respected each other’s missions – we weren’t competing with one another – and we watched and listened as they beat their drums and chanted their own mottoes. Suddenly their whole group moved into the roadway. When they parted, they left behind six pairs of protestors tied back to back, sitting in the crosswalks. The street-sitters wanted an immediate shut-down of a now-unlicensed immigration detention center in Berks County, Pennsylvania. They were impeding traffic. The few police officers who had been standing watch called in reinforcements. And we watched as at least six people were walked, dragged, or carried to the cruisers.

Wow. Here was action we had not expected. It was impressive. These were people who were truly devoted to their cause. A woman of a certain age watching next to me said, “You know, there was a time in my life when I would have taken part in that kind of civil disobedience.” She paused and sighed. “Not today, though.” She handed me her sign and headed up the steps to go in to the press conference. Signs on sticks were not allowed to be taken into the building. Only a few of us were left behind to continue the presence outside.

I hadn’t known about the press conference when I booked my round trip ticket. I was going to have to miss the proceedings in order to catch the train to get back home. So I didn’t get to see and hear the full slate of diverse speakers that the organizers had scheduled. I found out about them later. It was enough for me to know that a lot of good points had been made inside the capitol this morning.

“When I came out of prison – for some one interfered, and paid that tax – I did not perceive that great changes had taken place on the common … and yet a change had to my eyes come over the scene – the town, and State, and country – greater than any that mere time could effect.” ~ Thoreau, “Resistance to Civil Government”

I felt the same way on this day. As I walked back to the train station, I looked up at the oak trees outlining the capitol lawn. Nearly every one of them held a leafy squirrel nest. I watched as one of the residents ran along a branch and then stopped to sit and nibble on an acorn. The animal was perfectly oblivious to what had happened down the street – to what may indeed happen here on a regular basis – and to what was happening inside the House of Representatives gallery at this very moment. Life went on, no matter what. And yet I felt, like Thoreau, that my way of looking at the way the world works had altered and deepened somehow.

I caught more evidence of Life Going On from the train window and from my own car, as I headed home. People were working, eating lunch, running errands. I stopped at a convenience store to get gas. Unless someone looked closely at the fabric “Reject” flag that I still had pinned to my jacket, no one could tell what I had been up to this morning. It could be my own little secret, for now. 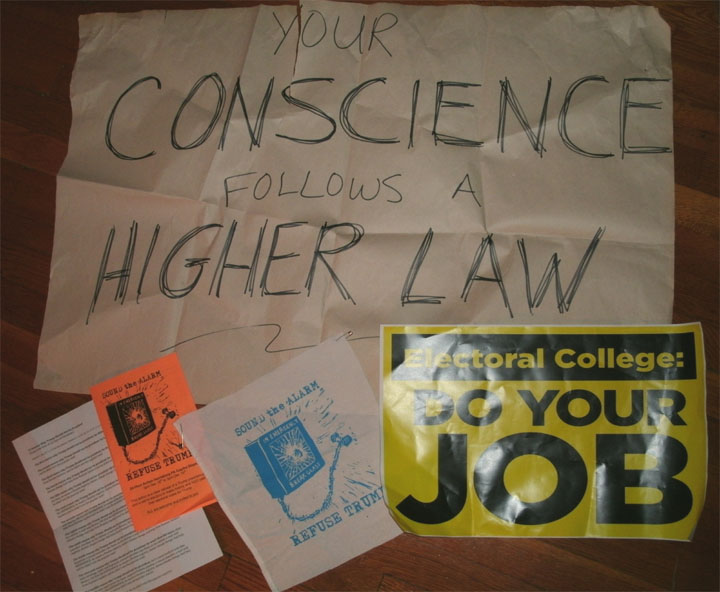 Henry Thoreau didn’t end the war with Mexico just by spending a night in jail. He wasn’t able to single-handedly stop the mandated return of runaway slaves to their southern masters by refusing to pay the annual Massachusetts poll tax. Yet he felt validated that he had at least done something, in his own individual way, on that July day in downtown Concord. (And by the way, Henry: poll taxes are now illegal in America. So it turns out that you were right, after all.)

Similarly, some may consider that the December 19th gatherings turned out to be ineffectual. The final Electoral College vote sadly fulfilled its prophesied expectations, even as more than 7,000 people protested in the 50 state capitals. But to those of us who participated, our involvement meant a great deal. We found validation in each other’s faces and voices. We had known that there were millions of like-minded people “out there,” somewhere, and not necessarily found in our usual circles of life and work. And here were some of them in person! We came together for a few hours to bond and to act upon our beliefs. And we know it won’t be for the last time.

Standing on concrete steps for three hours in 30-degree temperatures, holding a sign, chanting chants, and singing songs … No, my small preference for participation wasn’t the same as spending the night in a 19th-century granite-block county jail. Nor did it come close to the actions taken by the street-sitters who got arrested on this day. But I believe with even more certainty now that taking a stand in person – any stand at all — is just as important now in 2016 as it was in 1845. Thanks again for the inspiration, Henry.

Comments Off on Civil Disobedience: December 19, 2016