“This afternoon, being on Fair Haven Hill, I heard the sound of a saw, and soon after from the Cliff saw two men sawing down a noble pine beneath, about forty rods off. I resolved to watch it till it fell. … Before I had reached it the axeman had already half divested it of its branches. … And the space it occupied in upper air is vacant for the next two centuries. It is lumber. He has laid waste the air. … Why does not the village bell sound a knell? I hear no knell tolled. I see no procession of mourners in the streets, or the woodland aisles.” ~ Thoreau’s journal, December 30, 1851

Some fine, older trees stand among our 1950s suburban ranch houses. Four of the tallest and the oldest are in my own back yard. I’m lucky in this respect, except when it comes to having to rake leaves in the fall. But other nice trees also line my neighbors’ lawns along the street.

One of these neighbors – across the street and down one property – had a big sugar maple in the front yard. It had huge broad leaves and thick branches that hung over the street a bit. Sometimes you had to steer your car away from it so that the lowest limbs wouldn’t graze your roof. But it was hardly any hazard, if you only paid attention. At one point, I had thought of offering to trim off a few of the most sagging branches for these folks.

Alas, I never did. 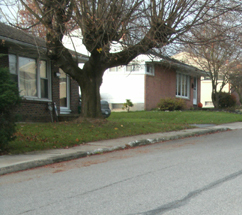 On a recent Monday morning, two heavy duty trucks and a chipper arrived on our street. I groaned when I saw where they parked: right beside that full sugar maple with the big green leaves. I hoped against all hope that the neighbors were just getting the tree trimmed to the street. But no. The longer the chain saw whined and the more frequently came the cluttered stints of the chipper, I knew this visit could only mean a true death sentence. It was. In just under 90 minutes, the entire maple was gone. Only a smooth stump remained, in the midst of a very bleak space. What a loss! 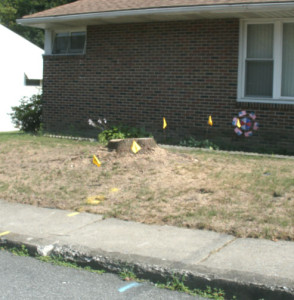 Within minutes, the magnificent tree was cut down.

If I had only known, I would have gone over and hugged this tree before the workers arrived. I would have searched its branches for birds and squirrels and warned them of the impending danger. I would have made sure no nests were still in use. I saw old nests in this tree every winter: as knotted fists captured in the spidery silhouette of bare branches. I hoped there weren’t any animal homes up there now. Most critters were out and on their own by this time of season, but you never knew. I could have chained myself to the trunk and defended them in person, if I had seen little ones to protect.

I don’t know the couple who lives in this house. I don’t know their reasons for initiating this awful act. The tree had shaded their whole front yard and had beautiful yellow leaves in the fall. Its intake of carbon dioxide and transpiration of oxygen was no doubt enough to supply all of the breathing air those two people needed to survive. It probably blocked out so much afternoon sun that they didn’t have to run their air conditioner as much as they would have, otherwise. And now their electric bills will begin to escalate, for sure. I can’t imagine that any real problems the maple caused couldn’t have been solved in another way. Unfortunately, it is now obvious by the posted little yellow flags that the gas line to the house led right underneath it. 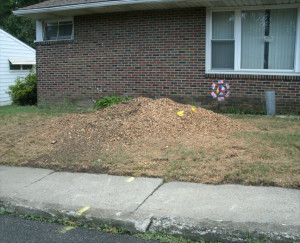 If I had only known, I would have taken pictures of the tree before those weapons of mass destruction arrived. As it is, a search of my stash of stills revealed only one really good photo of the tree, taken several winters ago. This is how I’ll remember this beautiful sugar maple. This was one of its good old days.

Now, after the fact, what can I do? Sometimes I feel as though I want to talk to the owners. I want to know the reasons; and yet at the same time, I don’t feel up to dwelling on the loss. I love big trees. I used to climb them, when I was young. I need them in my personal landscape. I’m still unsettled every time I pass this property or even look in its direction. There’s a void here. Thoreau described the scene aptly. They have “laid waste the air.” And just as on that Concord day 165 years ago, no village bells have tolled in remembrance of this life well lived. And they should have. They should have celebrated its existence loudly, before it was taken down. The tree should have heard something else in its last moments, instead of the whine and clutter of the machinery of its assassins. Am I the only one missing you, Tree? I hope not. I hope you had more friends than just me. 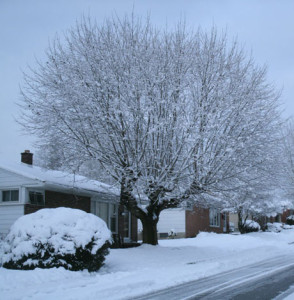