Could rhubarb have made Henry’s tongue so tart?

The Roost editor Sandy Stott is on vacation. The following post was written by Deborah Bier, member of the Board of Trustees, Thoreau Farm Trust. Ms. Bier also volunteers her gardening talents to keeping Thoreau Farm’s Kitchen Garden looking and smelling beautiful.

Rhubarb grows wild at Thoreau Farm, the birth place of Henry David Thoreau. No one knows how long  rhubarb plants have been at the farm. Although one of our board members, Joe Wheeler, a man of a “certain age,” grew up on Thoreau Farm and remembers eating rhubarb his father grew on the farm.

Rhubarb might have been gown on Thoreau Farm, where Thoreau’s maternal grandmother owned a third, during Thoreau’s lifetime.  (While he was born on the farm, Thoreau’s family moved when he was eight months old.) We do know that Thoreau wrote about rhubarb.

About a year ago, having set aside a bowl which had contained some rhubarb grated in water, without wiping it, I was astonished to find a few days afterward, that the rhubarb had crystallized, covering the bottom of the bowl with perfect cubes, of the color and consistency of glue, and a tenth of an inch in diameter. 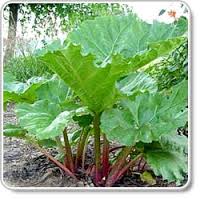 Rhubarb grows in the underbrush and in the woods found on the east side of the house. We’ve transplanted some of the wild rhubarb into one of  our Kitchen Garden beds. It thrives in the sunlight and from the attention of our visitors, and every year yields a bumper crop.  We enjoy growing – and occasionally sharing – this rhubarb with others to continue the plant’s tradition at this location.

For more information about rhubarb, including how to plant and use it, visit www.rhubarbinfo.com.

We at Thoreau Farm appreciate rhubarb so much, that we’ve established a “house drink” served at special occasions based upon its profuse presence here: Rhubarb Shrub.

The US Slow Food “Ark of Taste” includes shrub among 200 foods listed as endangered due to industrial standardization, the regulations of large-scale distribution and environmental damage. Here’s what they write about shrub:

Shrub is a colonial-day drink whose name is derived from the Arabic word sharab, to drink. It is a concentrated syrup made from fruit, vinegar, and sugar that is traditionally mixed with water to create a refreshing drink that is simultaneously tart and sweet. In the 19th century, the drink was often spiked with brandy or rum. Ubiquitous in colonial times, the use of shrubs as a flavoring for tonic and sodas subsided with increasing industrial production of foods.

Put the sliced rhubarb into a pan with 2 cups of water. Bring to a boil and simmer until tender, about 15 minutes. Remove from heat; add the sugar, vinegar and spices, stirring well. Strain thru a sieve, saving juice and pulp separately*. Add remaining water. There will be about 4 1/2 cups rhubarb juice. Chill. When ready to serve, pour juice into punch bowl with ice and the seltzer.

(*Pulp may be served later as a dessert with a dab of whipped cream on top.)

We hope you enjoy this summer drink as much as we do. Let us know if you’ve tried our recipe and send us an email, info@thoreaufarm.org.

Comments Off on Could rhubarb have made Henry’s tongue so tart?